Desiccation tolerance was a critical adaptation for the colonization of land by early nonvascular plants. Perhaps the most spectacular adaptations relating to vegetative dehydration tolerance are exhibited by “resurrection plants” that have the ability to recover from conditions of almost complete anhydrobiosis. 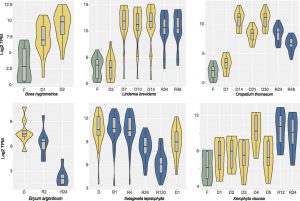 Vegetative desiccation tolerance evolved independently in at least 13 lineages of angiosperms, and over 300 diverse resurrection plant species have been identified to date across all major plant taxa outside the gymnosperms. VanBuren et al. (10.1104/pp.18.01420) have used a comparative approach to identify patterns of genome evolution and gene duplication associated with vegetative desiccation tolerance. They have identified a single gene family with dramatic expansion in all sequenced resurrection plant genomes and no expansion in desiccation-sensitive species. This gene family of early light-induced proteins (ELIPs) expanded in resurrection plants convergently through repeated tandem gene duplication. The photosynthetic machinery is particularly sensitive to dehydration and must be maintained intact or repaired quickly after rehydration. Desiccation-associated responses are well characterized, and a core set are conserved across all resurrection plants. These include accumulation of osmoprotectants, reactive oxygen species (ROS) scavengers, and late-embryogenesis abundant proteins as well as changes in cell structure and other physical properties. The increased abundance of ELIPs in rehydrating resurrection plants may help facilitate the rapid recovery of resurrection plants following dehydration. Similar duplication patterns despite 475 million years of separation support the idea that the evolution of vegetative desiccation tolerance occurred convergently in various plant taxa.