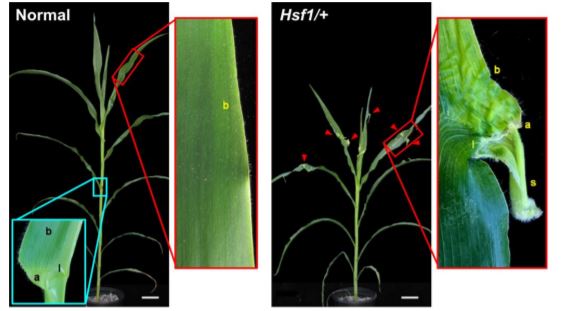 Variation in leaf morphology across the angiosperms is impressive and abounds. Leaves are the primary photosynthetic organ for most angiosperms, acting as the primary sites of light capture and gas exchange. Typical of grass leaves, maize leaves are strap-like and simple, with unelaborated margins. Leaves take their shape early in development, arising as lateral primordia at the flank of the shoot apical meristem. As the primordium emerges from the meristem periphery, the three distinct axes that will define its mature form are established: proximal/distal (base/tip), medial/lateral (middle/margin) and ad/abaxial (upper/lower) (Conklin et al., 2019). A key feature along the proximal/distal axis of maize leaves is the ligular region, where the auricle and ligule form a striking morphological boundary between the proximal sheath and distal blade. Understanding the genetic basis of leaf patterning is a central topic in plant developmental biology. Here, Muszynski et al. (2020) describe the role cytokinin plays in establishing a proximal/distal axis during maize leaf development. 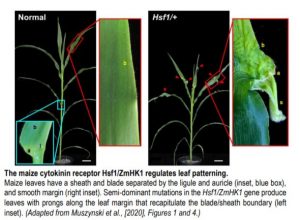 With the candidate gene in hand and given the CHASE domain harbored amino acid substitutions in Hsf1, Muszynski and coworkers hypothesized that Hsf1 phenotypes could be due to cytokinin hypersignaling from the ZmHK1 receptor. Using a powerful heterologous histidine kinase signaling assay in yeast, Muszynski et al. (2020) showed that mutant ZmHK1 receptors actively signaled in the absence of cytokinin. Binding assays with the different mutant ZmHK1 receptors expressed in bacterial spheroplasts or tethered within tobacco membranes via transient in planta expression established that missense mutations in the Hsf1 CHASE domain increased the relative binding affinity of ZmHK1 for naturally occurring cytokinin ligands. Modeling the effects of mutations in ZmHK1 on the solved crystal structure of Arabidopsis thaliana AHK4 (Hothorn et al., 2011) suggested that the mutated residues reside near, but not in, the cytokinin binding pocket and may impact the binding affinity for the hormone.

With the Hsf1 leaf phenotypes likely the result of hypersignaling of cytokinin, the authors asked if exogenous application of a synthetic cytokinin could 1) phenocopy Hsf1-related leaf patterning in wild-type seedlings and 2) enhance the leaf phenotypes of Hsf1 mutants. Wild-type seedlings treated with exogenous cytokinin had smaller leaves with dense macrohairs and prongs that developed on the blade margins. In the presence of exogenous cytokinin, Hsf1 seedlings showed enhancement of leaf these phenotypes, demonstrating that Hsf1 was hypersensitive to the hormone. In support of these observations, Muszynski et al. (2020) used qRT-PCR and RNA in situ hybridization to show that the cytokinin type-A response regulator ZmRR3 is ectopically expressed in the shoot apices of plants heterozygous for Hsf1, particularly in the primordial margins at the presumptive position of prong emergence. Turning to genetics, the authors observed a synergistic interaction between Hsf1 and a null allele of ZmRR3, aberrant phyllotaxy1, suggesting that ZmRR3 dampens cytokinin signaling in the maize shoot. Together, this work sheds light on a key role for cytokinin in programming developmental patterning in maize leaves.

Regulation of a K+ Channel A by Phosphorylation 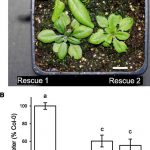 Certain Flippases Are Important for Vegetative Growth
Scroll to top