At first glance, starch is just an inert, calorie-laden material produced by plants to store excess carbohydrates derived from photosynthesis. Starch accumulates in leaf mesophyll cells during the day and is metabolized at night. The precise circadian control of this process ensures optimal energy utilization. Starch also accumulates in guard cells, which allow stomata to open and close to help fulfill the plant’s need for CO2 uptake for photosynthesis while preventing water loss. Until recently, the metabolism of starch in guard cells was less clear (reviewed in Lawson et al., 2014). Conflicting evidence suggested that starch-derived metabolites accumulate in guard cells surrounding open stomata, perhaps serving as osmotica to help promote stomatal opening. However, it was nearly impossible to quantify and track the production of these metabolites until Horrer et al. (2016) developed an innovative technique using epidermal peels from mature Arabidopsis thaliana leaves. The cells are fixed and the resident sugars are cleaved with periodic acid, covalently linking the fluorophore propidium iodide to the glucans. High-resolution analytical imaging is then used to quantify the starch in guard cells over the diurnal cycle. This analysis indicated that starch is present in guard cells at night and is degraded soon after daybreak to help generate the sugar and organic acid needed to promote rapid stomatal opening. Mutant analysis revealed that the rapid mobilization of starch-derived metabolites during this process is accomplished by the synergistic action of the starch hydrolases β-AMYLASE1 (BAM1) and α-AMYLASE3 (AMY3).

Plants also degrade starch under stressful conditions, where they serve as osmoprotectants, free radical scavengers, and stabilizers of protein and cellular structure. While BAM1 was shown to be important for stress-induced leaf starch degradation, until recently, it was unclear if other starch hydrolases also degrade leaf starch under stress and if this process is indeed important for stress tolerance. By carefully tracking the fluctuations in starch-derived metabolite levels in plants under controlled osmotic stress conditions combined with mutant analysis, Thalmann et al. (2016) found that an intricate regulatory mechanism adjusts the levels of these metabolites to help maintain an optimal carbon supply for continued plant growth in an ever-changing environment. This process involves both BAM1 and AMY3: Leaf starch degradation increased in wild-type Arabidopsis plants under osmotic stress but not under control conditions, whereas leaf starch levels remained constant in the amy3 bam1 double mutant under stress due to impaired starch degradation. The mutant exhibited increased sensitivity to osmotic stress due to reduced root growth (see figure). Therefore, in the absence of BAM1 and AMY3, plants fail to mobilize leaf starch under stress and have reduced carbon export to the root (as confirmed by 14CO2 labeling experiments and measurement of starch-derived metabolite levels), thereby reducing the availability of osmolytes for water and nutrient uptake, as well as root growth. Finally, since the phytohormone abscisic acid (ABA) plays a pivotal role in osmotic stress responses, the authors investigated its effects on leaf starch metabolism. Mutant analysis revealed that ABA upregulates BAM1 and AMY3 expression by promoting the phosphorylation of AREB/ABF transcription factors, which bind to the ABA-responsive elements in these genes to alter starch metabolism under stress, a mechanism most likely conserved among plants, proving once again that starch isn’t just a source of empty calories. 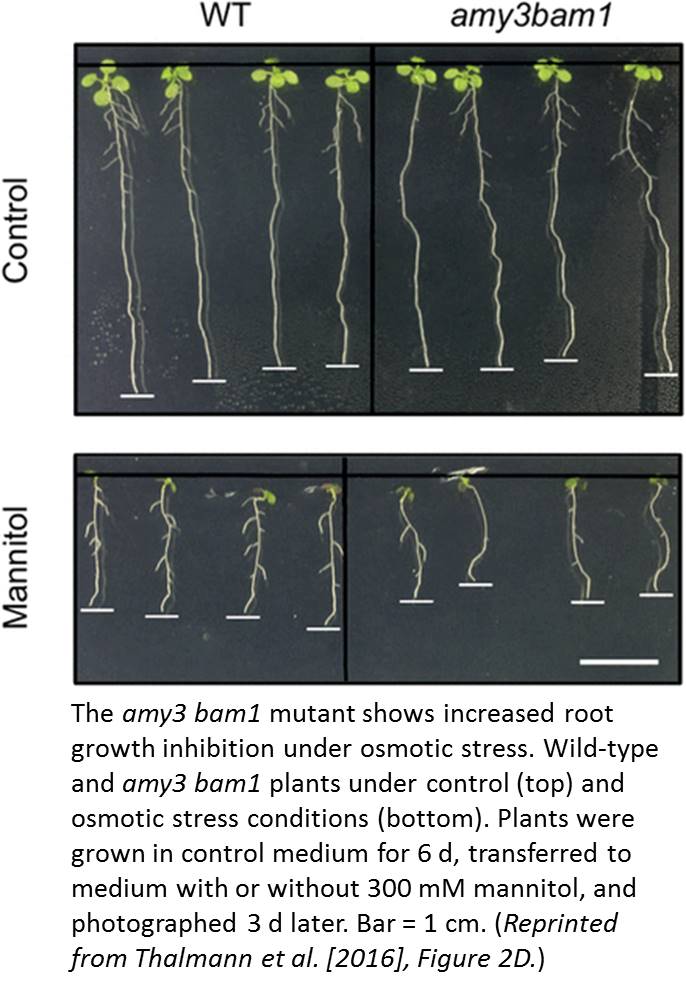 Examination of Protein Complexes Gets SiMPull