If you’ve ever grown cucumbers (Cucumis sativus) at home, you know that at some point over the summer, those cucumbers will probably produce a bounty of fruit and only your trusted pickle recipe will help manage the massive number of cucumbers. Rather than being overwhelmed commercial growers want even more––cucumber plants can produce male (staminate), female (pistillate), and hermaphrodite flowers, but every male flower is a wasted opportunity to increase yield. For this reason, breeders have been using the Female (F) locus for years to increase the number of female flowers in cucumber cultivars.

Despite its wide use, the mechanism by which F prevents the formation of male flowers remains controversial. The F locus contains a 30.2-kb duplication (Figure, top) that results in an extra copy of a gene encoding a MYB transcription factor (MYB1), and an extra copy of the gene encoding the enzyme 1-aminocyclopropane-1-carboxylate [ACC] synthase (ACS1), which participates in ethylene biosynthesis. In the F haplotype, the extra copy of ACS1 is fused to the promoter of the encoding Branched Chain Amino Acid Transaminase (BCAT) gene; this fusion gene, which includes an exact copy of the ACS1 coding sequence and most of the upstream region, is named ACS1G. 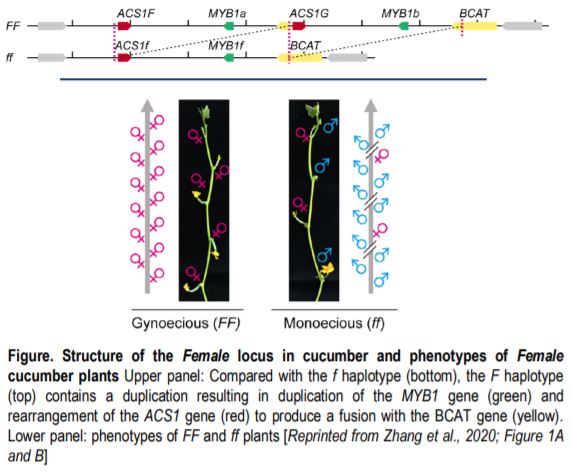 Ethylene has key functions in the development of unisexual flowers: developing flowers have both male and female primordia and ethylene promotes the formation of female flowers by inhibiting development of the male primordia, possibly by inducing DNA damage (Wang et al., 2010). Plants of the FF genotype produce mostly female flowers and plants of the ff genotype produce a mix of male and female flowers (Figure, bottom). Do FF plants make female flowers because of a dosage effect due to having an extra copy of ACS1 (or MYB1), or because of a change in expression due to the promoter fusion in ACS1G? In a recent paper in The Plant Cell, Zhang et al. (2021) address this question by using CRISPR/Cas9 to mutate the loci individually. One wrinkle in this approach is that the FF plants are recalcitrant to transformation; therefore, the authors introduced the gene-editing reagents into ff plants and used these plants as the male parents in crosses to FF plants. In F1 plants carrying Cas9, the genome editing reagents can act on both the f and F haplotypes. Mutants affecting MYB1 (the copy linked to F or that linked to f) still produced all female flowers, showing that MYB1 is not related to the phenotype. Mutants of ACS1G and the copy of ACS1 linked to F lost the all-female phenotype; however, the untranslated and coding sequences of the two genes are identical, preventing the authors from distinguishing which one is responsible for the phenotype.

To differentiate these, the authors then used ethyl methanesulfonate (EMS) to mutagenize an Ff line (a difficult task, since these plants rarely produce male flowers and are very sensitive to EMS). They identified single-nucleotide polymorphisms (SNPs) in ACS1G and ACS1 that did not affect ACS1 activity or the F phenotype, but did allow the authors to distinguish ACS1G from the copies of ACS1 linked to the F and f haplotypes. Using these SNPs, the authors showed that transcripts from ACS1G were predominant at the key stages for female flower determination and the transcripts from the copies of ACS1 linked to F or f were present in much lower amounts. In situ hybridization and promoter-reporter fusion assays confirmed that the ACS1G promoter produced strong expression at the key stage. Finally, the authors constructed transgenic ff cucumber plants expressing ACS1G and found that they produced all female flowers, showing that ACS1G is sufficient for the F phenotype.

To examine how this gain-of-function ACS1G produces female flowers, the authors examined the relationship between this gene and other genes regulating cucumber flower development (reviewed in Li et al., 2019). In ff cucumber plants, which produce both male and female flowers, another ACS gene, ACS11 (also known as Androecious), is expressed in developing female flowers. ACS11 cooperates with another enzyme, ACC oxidase 2 (ACO2), to produce ethylene in female flowers and repress the transcriptional program that produces male flowers. In developing male flowers, ACS11 is not expressed and therefore ethylene is not produced, allowing the development of male flower primordia. However, in Ff and FF plants, the expression of ACS1G in all flower primordia overrides the lack of ACS11 expression, programming all flowers to be female. Like ACS11, ACS1G functions with ACO2 to produce ethylene.

The identification of ACS1G as the causal gene for the F phenotype, via a gain-of-function rearrangement that alters ACS1 expression, solves a long-standing mystery about the function of the F locus. Moreover, these findings have implications for other cucurbit fruit crops, as the mechanisms that determine male vs. female flowers are broadly conserved. Although the rearrangement that produced the ACS1G expression pattern may be difficult to replicate by “transgene-free” genomic editing methods, emerging methods using homology-directed repair may enable researchers to produce copious cucurbits in all your favorite crops, including melon (Cucumis melo), watermelon (Citrullus lanatus), squash (Cucurbita pepo), and others. 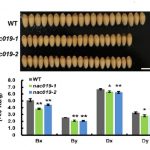 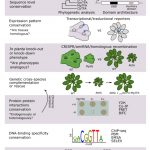