In the photosynthetic Calvin-Benson cycle, the enzyme ribulose 1,5-bisphosphate carboxylase/oxygenase (Rubisco) fixes CO2 into organic compounds. A major limitation of Rubisco is that oxygen can compete with CO2 for the active site of the enzyme, resulting in the wasteful process of photorespiration (Bauwe et al., 2010). Photosynthetic organisms in an aquatic environment have the additional restraints of slow diffusive rate of gases and slow interconversion of inorganic carbon (Ci) forms (i.e., CO2 and HCO3–). Thus, most aquatic autotrophs have evolved a CO2 concentration mechanism (CCM) that increases the concentration of CO2 around Rubisco to limit photorespiration.

In the green alga Chlamydomonas reinhardtii, the CCM involves multiple components that acclimate the algae to low CO2 conditions. Ci uptake is carried out by HCO3– transporters since unlike CO2, HCO3– cannot readily diffuse in and out of membranes. Carbonic anhydrases (CAs) interconvert HCO3– to CO2  to concentrate CO2 around Rubisco within the chloroplast (Moroney et al., 2011). Another CCM component is a microcompartment in the chloroplast called the pyrenoid where the majority of Rubisco is localized. A Rubisco linker protein, Essential Pyrenoid Component 1 (EPYC1) serves as scaffolding for the assembly of Rubisco in the pyrenoid (Mackinder et al., 2016) and a network of pyrenoid tubules facilitate the movement of ATP and metabolites into the pyrenoid from the chloroplast stroma from the Calvin–Benson cycle  (Engel et al., 2015).

A starch sheath, made of starch plates, also develops around the pyrenoid in low CO2 (LC; approximately 0.03–0.5% CO2) and very low CO2 (VLC; <0.02% CO2) conditions, but there has been no direct evidence thus far about its involvement in the CCM. The recently identified starch granules abnormal 1 (SAGA1) protein interacts directly with Rubisco (Itakura et al., 2019). The saga1 mutant has multiple pyrenoids, without the network of tubules, and irregular starch plates. Low-CO2 inducible protein B  (LCIB), which accumulates strongly in LC and VLC conditions, might contribute to pyrenoid function (Yamano et al., 2010). In LC, the lcib mutant has a poor growth phenotype and reduced Ci affinity compared to WT.  LCIB dynamically localizes in high CO2 (HC; approximately > 5% CO2) and LC conditions in the chloroplast stroma, recapturing CO2 diffusing out of the pyrenoid by converting CO2  to HCO3–  (Wang and Spalding, 2014). In contrast, under VLC LCIB forms puncta around the starch sheath area of the pyrenoid forming a ring shape around the pyrenoid (Yamano et al., 2010).

In this issue of Plant Physiology, Toyokawa et al., 2020 bring forth new evidence to show the effect of the pyrenoid-surrounding starch sheath on LCIB localization and the overall operation of the CCM.  TEM (transmission electron microscopy) images of an Isoamylase1 disrupted mutant (4-D1) showed only small starch granules when compared to the thick starch sheath surrounding the pyrenoid in WT under VLC conditions. On prolonged exposure to VLC, fluorescent signals for LCIB were either dispersed (12h) or concentrated at the basal area of the chloroplast in 4-D1 as opposed to the trademark ring like localization of LCIB in WT. Another previously identified starchless mutant sta11-1 lacking a proper starch sheath but retaining small starch plate-like structures (Colleoni et al., 1999)showed similar patterns of aberrant LCIB localization. Both 4-D1 and sta11-1 struggled to grow in VLC conditions compared to WT, with no difference in phenotype in HC conditions. In LC-grown 4-D1 and sta11-1,  Ci affinity was reduced compared to the to that of WT; low Ci affinity is common in CCM defective mutants.

Thus, in LC both growth and Ci affinity indicate that a starch sheath is required for proper functioning of the CCM. What is the role of the starch sheath? Perhaps the starch sheath not only prevents leakage of CO2 from the pyrenoid but also acts as a barrier to photosynthetically evolved O2, thereby preventing Rubisco oxygenation. LCIB localization is also dependent on the presence of a starch sheath, which might be acting as a scaffold (Toyokawa et al., 2020). A recent study hypothesized that LCIB may be playing a role in CO2 recapture (Mukherjee et al., 2019), and an absence of the starch sheath may prevent LCIB from maintaining an internal pool of high CO2 near the active site of Rubisco.

In conclusion, Toyokawa et al., 2020 provide crucial evidence showing the importance of the starch sheath in the CCM of Chlamydomonas reinhardtii, which has been a point of speculation for a long time. As discussed by the authors, it is possible that the starch sheath not only prevents the leakage of CO2 in LC from the pyrenoid but also minimizes oxygen exposure in the pyrenoid matrix. Future studies might be able to show why LCIB localization is affected by the absence of a starch sheath. 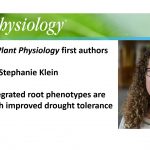 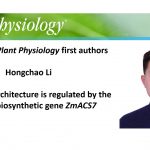