When did you last stop to think about the amazing chemical properties of water? Water is one of the few substances that have a larger volume as a solid than a liquid due to the hexagonal arrangement of molecules that make up ice crystals. For plants, ice crystals forming in the extracellular space of cells during freezing conditions cause physical stress and dehydration. This ultimately can result in intracellular freezing and plant death. Plants therefore have evolved strategies to survive the icy chill. One such strategy is to initiate cellular changes in response to a period of cold (0°C–8°C), called cold acclimation, which prepares plants for future freezing conditions. Studies of this process in model and crop species have uncovered transcription factors that regulate a transcriptional cascade of cold-responsive genes as well as a range of metabolic and physiological changes (Thomashow, 1999). Physical changes to membranes are critical to freezing tolerance, as cold temperatures reduce membrane fluidity and together with dehydration cause loss of membrane integrity. Freezing tolerance is associated with increases in unsaturated fatty acids, which maintain membrane fluidity, and a reduction of lipids such as phosphatidic acid (PA), which can form nonbilayer lipid structures (Barrero-Sicilia et al., 2017; Fig. 1). 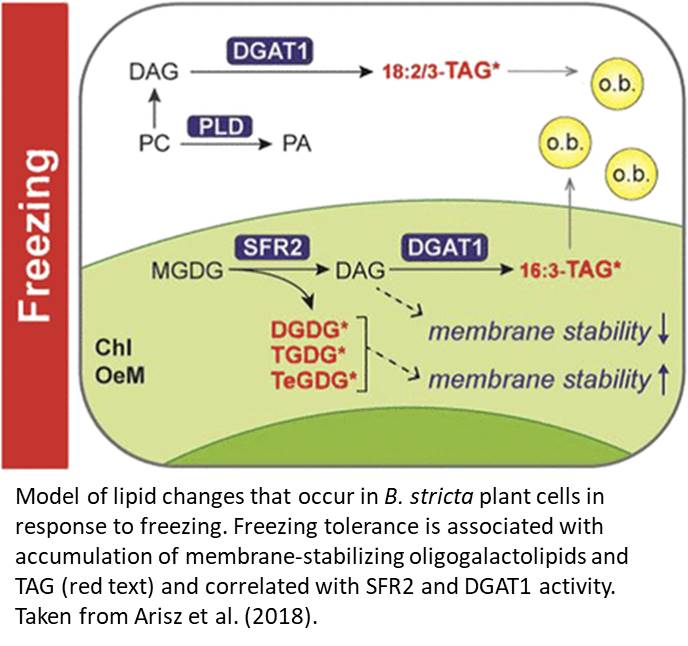 The importance of maintaining integrity in the chloroplast outer membrane was highlighted by the identification of the SENSITIVE TO FREEZING2 (SFR2) gene, encoding a galactolipid-remodeling enzyme (Fourrier et al., 2008), in Arabidopsis (Arabidopsis thaliana). During freezing conditions, SFR2 transfers galactosyl residues to produce oligogalactolipids and diacylglycerol (DAG). Whereas oligogalactolipids are thought to stabilize membrane bilayer structures, DAG has the opposite effect. The modification of DAG by acylation to triacylglycerol (TAG) is proposed to prevent accumulation of membrane-disrupting lipids and enhance freezing tolerance. DAG also can be phosphorylated to PA, which can form nonbilayer lipid structures and activate RbohD to produce reactive oxygen species (Tan et al., 2018). Enzymes downstream of DAG therefore have been proposed to play critical roles in regulating plant responses to cold.

The characterization of DIACYLGLYCEROL ACYLTRANSFERASE1 (DGAT1), which catalyzes the conversion of DAG to TAG, as having a key role in freezing tolerance has provided a major advance in understanding the processes that fine-tune lipid composition during cold signaling. In this issue, Arisz et al. (2018) investigated freezing tolerance in Boechera stricta, a Brassicaceae species related to Arabidopsis that is native to the Rocky Mountains. Using a comparative genomics study of freezing-tolerant and -sensitive B. stricta ecotypes, DGAT1 was identified as a major contributor to freezing survival. In a complementary study, Tan et al. (2018) found that dgat1 mutants in Arabidopsis accumulate less TAG in response to freezing and are less tolerant to freezing than the wild type. DIACYLGLYCEROL KINASEs (DGKs), which phosphorylate DAG to produce PA, also were shown to have an important role in freezing tolerance. Mutants with defects in DGK2, DGK3, and DGK5 showed reduced freezing-induced PA accumulation and enhanced freezing tolerance (Tan et al., 2018). Both studies use a combination of genetics, gene expression studies, and lipid profiling to comprehensively evaluate the role of DGAT1 and how it acts together with other regulators of cold acclimation and freezing tolerance. Both studies use advanced mass spectrometry profiling of lipids to provide greater insight into the dynamic changes during both cold acclimation and freezing. For example, in-depth lipidome analysis of freezing-tolerant and -sensitive B. stricta ecotypes identified a role for DGAT1 in SFR2-dependent chloroplast membrane remodeling during freezing (Arisz et al., 2018).

These discoveries show that DAG, TAG, and PA are dynamically regulated to fine-tune protective responses and that DGAT1 has a central role in balancing lipid composition and freezing tolerance. The significance of characterizing these mechanisms in wild plant species such as B. stricta, in addition to Arabidopsis, supports the likely conservation of these pathways in natural plant populations. Loss of crop productivity in response to cold and freezing conditions can have major economic and humanitarian impacts. More frequent temperature extremes are predicted to occur in future, and further understanding of lipid remodeling during cold acclimation and freezing is critical to our ability to improve crop resilience. Further work analyzing the dynamics of transcriptomic and lipidomic responses in freezing-tolerant species at different temperatures and durations of cold will broaden our knowledge of this vital plant response to the process of water freezing.

A Method to the Madness: Using Persistent Homology to Measure Plant Morphol...