Apple (Malus x domestica) is a major fruit crop worldwide that faces production losses due to many pathogens. Among them, Alternaria alternata is a fungal pathogen that causes necrotic leaf spots (see Figure), defoliation, and moldy fruit cores and constitutes a serious threat to orchards. Different strains of the pathogen with varying pathogenicity and host specificities exist, as determined in part by the fungus’ ability to produce virulence factors, especially cyclic peptide toxins. 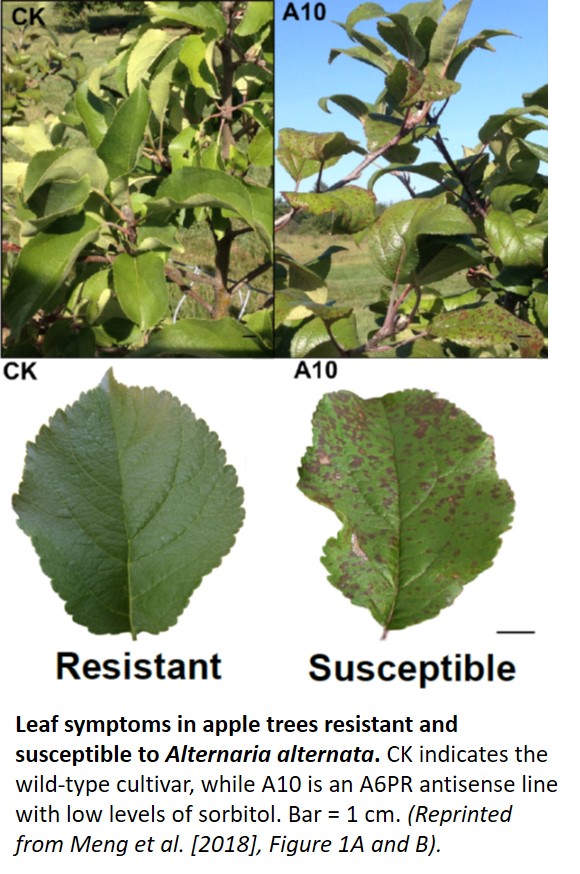 Plants produce sugars that pathogens crave. Strategically, the internal leaf sugar level in apple is linked to high levels of R gene expression. In this system, more intracellular sugar results in higher resistance to Alternaria. Meng et al. (2018) show that sorbitol, a sugar alcohol that is a major carbon transport form in Rosaceae, including apple, has been co-opted as a signal to regulate the apple R gene MdNLR16. MdNLR16 detects Alternaria by interacting with Hrip1, an effector protein produced by the pathogen. The interaction with the effector protein is a classic gene-for-gene mechanism. Sorbitol-modulated NLR gene expression is controlled by the transcription factor MdWRKY79.

Zhang et al. (2018) describe another path to regulating R genes essential for Alternaria resistance. Apple genomes encode a hairpin RNA, MdhpRNA277, which results in the production of small interfering RNAs that target five R genes (MdRNL1–5). The absence of expression of these R genes results in increased susceptibility to Alternaria. In the resistant cultivars, MdWHy, a transcription factor induced by Alternaria, fails to bind the MdhpRNA277 promoter thanks to a single nucleotide polymorphism in this region. This backfires in the susceptible cultivars, resulting in interference by the plant of its own resistance genes while under attack. This may be an evolutionary misstep, as the hairpin RNA itself may have evolved from a duplication of R genes.

These two studies provide multiple novel and independent potential paths to breeding apple cultivars that are pathogen-resistant by the modulation of R gene expression. It remains to be clarified whether these paths are synergistic or antagonistic in providing resistance to the different strains of Alternaria with and without the AM toxins, as used in the two studies, and potentially other fungal pathogens.