Background: Acid soils are one of the most significant problems for worldwide crop production, as up to 50% of the world’s arable land is acidic. Aluminum (Al) toxicity and inorganic phosphate (Pi) limitation are two major interconnected problems in acid soils, potentially triggering a strong inhibition of root growth, stem cell loss, nutritional deficiency and an overall reduction in plant yield. The problem is further aggravated by farming practices and industrial pollution. As Al toxicity and Pi deficiency raise the risk of food insecurity, it is important to understand the molecular mechanisms by which they affect growth.

Question: To pinpoint new molecular components that result in the problem of stem cell loss, we used a small compound screen to identify chemicals that help to overcome meristem loss of Arabidopsis plants grown under Al toxic conditions.

Next steps: As both CK2 and SOG1 inhibition prevent Arabidopsis root stem cell loss under Al toxic and Pi limiting conditions, it will be important to test whether the same mutations help crops deal with the problems linked to acid soils. Additionally, it will be important to know how CK2 and SOG1 contribute to meristem loss by identifying their downstream target genes. Another important aspect is understanding how CK2 controls SOG1 activity, a question that might be solved by studying SOG1 at the structural level. 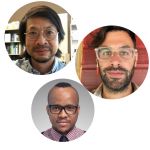 We want to hear from YOU. An invitation from ASPB Forward
Scroll to top