Of all abiotic stresses faced by plants, water deficit (WD) is the one that most profoundly affects crop productivity. When exposed to WD, plants first respond by restricting stomatal aperture and by rapid changes in root hydraulic conductivity (Lpr). Over a longer term, plants change both shoot 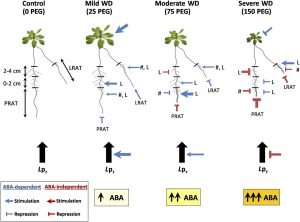 growth (to restrict water loss) and root growth and differentiation to modulate their capacity to take up soil water. Root water uptake is influenced by root system architecture, which is determined by root growth and branching and the hydraulics of root cells and tissues. Abscisic acid (ABA) is recognized as the main plant stress hormone produced in the rapid responses of plants to WD. Rosales et al. (10.1104/pp.18.01546) now examine the regulatory role of ABA in determining the slower changes that occur in response to WD in the root hydraulic architecture of Arabidopsis. Root system architecture and root hydraulic conductivity (Lpr) were analyzed in hydroponically grown plants subjected to varying degrees of WD induced by various polyethylene glycol concentrations. The majority of root traits investigated, including first- and second-order lateral root production and elongation and whole-root hydraulics, had a bell-shaped dependency on WD, displaying stimulation under mild WD conditions and repression under more severe conditions. These traits also showed a bell-shaped dependency on exogenous ABA, and their regulation by WD was attenuated in genotypes altered in ABA biosynthesis and response. Thus, ABA appears to act as a coordinator and an integrator of most root responses to mild and moderate WD, whereas responses to strong WD are largely ABA independent.  These findings provide important insights into the mechanisms and significance of adaptive control of root hydraulic architecture relative to WD intensity. 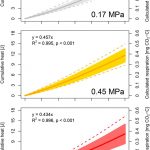 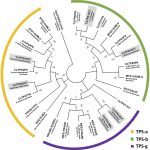 Coregulation of Cannabinoid and Terpenoid Pathways
Scroll to top