Background: Penetration resistance, a key aspect of plant innate immunity, hinders fungi from entering the plant and involves a well-described innate immunity process that depends on the formation of papillae. As a member of the phospholipase D (PLD) family of enzymes in plants, PLDδ acts as the main isoform in the penetration resistance of Arabidopsis to barley powdery mildew fungi (Blumeria graminis f. sp. hordei, Bgh), with a striking accumulation at the attempted Bgh penetration sites. As the pivotal regulator of phospholipid signaling, the distinct location of PLD is closely associated with its function; nevertheless, the regulatory mechanisms and the relocalization of PLDδ in response to pathogens remain poorly understood.

Question: Numerous studies have focused on the role of phosphatidic acid in activating downstream signaling in plant defense, but the subcellular trafficking and regulatory details of PLDδ in response to pathogens have yet to be fully elucidated.

Findings: Here, we show that Arabidopsis thaliana PLDδ accumulated at the entry sites of Bgh. Single-particle analysis revealed a higher density of PLDδ in the plasma membrane after chitin treatment, and PLDδ underwent rapid and massive exocytosis. Fluorescence resonance energy transfer with fluorescence lifetime imaging microscopy (FRET-FLIM) showed that exocytosis facilitated the nanoscale aggregation of pathogen-triggered PLDδ within AtREM1.3-labeled microdomains. The secretion of PLDδ occurred by both Brefeldin A (BFA)-resistant and sensitive pathways and BFA-sensitive secretion increased significantly in response to pathogen. Upon pathogen attack, PLDδ was secreted via SNARE-mediated exocytosis sensitive to BFA. By analyzing phosphatidic acid, H2O2 and jasmonic acid (JA) levels, and expression of related genes, we further unveiled that the translocation of PLDδ is crucial to trigger reactive oxygen species and JA signaling pathways. Together, our findings illustrate a novel regulatory mechanism involving exocytosis in the transport of PLDδ, aiding in the execution of penetration resistance against a fungal pathogen.

Next steps: Previous studies reported that the local production of PA by PLDs induces negative curvature of the membrane and recruits other proteins for membrane fusion. In our further studies, we will focus on the function of PLDδ-PA in membrane fusion of plant exosomes in papillae. We will also investigate whether SNARE-mediated exocytosis is influenced by accumulation of PLDδ-PA at the pathogen entry sites. 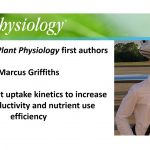 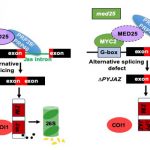 MED25 regulates the alternative splicing of JAZ genes through recruitment of...
Scroll to top