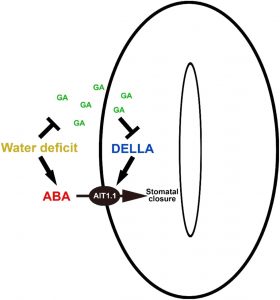 The negative interaction between gibberellic acid (GA) and the stress hormone abscisic acid (ABA) has been studied for many years in numerous plant species. These studies suggest that GA and ABA negatively affect each other’s biosynthesis and signaling. The nuclear DELLA proteins suppress almost all GA responses by interacting with various transcription factors. ABA plays a central role in the regulation of stomatal closure under water-deficit conditions. Previously, Shohat et al. (10.1104/pp.20.00485) have demonstrated that a gibberellin response inhibitor in tomato (Solanum lycopersicum), the DELLA protein PROCERA (PRO), promotes ABA-induced stomatal closure and gene transcription in guard cells. Their attentions have now turned to the question of how PRO affects stomatal closure. PRO does not affect ABA accumulation in leaves, suggesting that that it affects ABA signaling or uptake into guard cells via transcriptional regulation of unidentified ABA signaling components or transporter genes. To examine these possibilities, the authors performed RNA-sequencing analysis of isolated guard cells. They have identified ABA-IMPORTING TRANSPORTERs (AITs) as being upregulated by PRO. Tomato has four AIT1 genes, but only AIT1.1 and AIT1.2 were upregulated by PRO, and only AIT1.1 exhibited high expression in guard cells. The functional analysis of AIT1.1 in yeast (Saccharomyces cerevisiae) confirmed its activity as an ABA transporter. A ait1.1 mutant exhibited increased transpiration, larger stomatal apertures, and a reduced stomatal response to ABA. Moreover, ait1.1 suppressed the promoting effects of PRO on ABA-induced stomatal closure and gene expression in guard cells, suggesting that the effects of PRO on stomatal aperture and transpiration are AIT1.1-dependent. Although many previous studies have revealed negative crosstalk between gibberellin and ABA that is mediated by changes in hormone biosynthesis and signaling, the results of the present study suggests this crosstalk can also be mediated by changes in hormone transport. 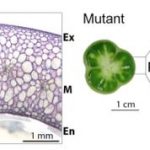 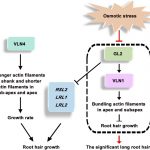