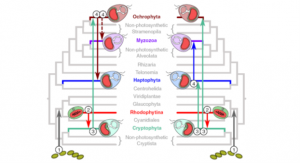 Algae powered by red algal-derived plastids (e.g., diatoms, dinoflagellates, and coccolithophores) are among the most evolutionary and ecologically successful eukaryotes on Earth, but their origins and relationships remain poorly understood. Here, Strassert et al. test the rhodoplex hypothesis that designates an evolutionary scenario in which plastids were acquired from red algae by a single secondary endosymbiosis, with further horizontal spread in other eukaryotes by eukaryote-to-eukaryote endosymbiosis. The study shows that the recipients and the donors of plastids were contemporaneous and most likely overlapped during the early history of the life on Earth, which explains transfer of these plastids between seemingly unlikely distant related hosts. The study also shows that the time between the start of the secondary endosymbiosis and the establishment of the complex red plastids was in a short time frame between 650 to 1079 million years. Interestingly, in spite of their ancient origins, red algal-derived plastid-containing lineages did not become ecological prominent for another billion years, perhaps coinciding with the breakup of continents and formation of nutrient-rich coastal zones. (Summary by Arun K. Shanker @arunshanker) Nature Comms. 10.1038/s41467-021-22044-z 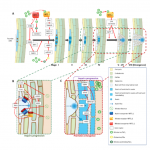 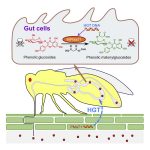