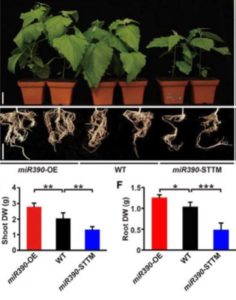 Soil salinity is a major threat to crop yields around the world. Salt generally damages plants through osmotic stress in the rhizosphere, interfering with water and nutrient uptake and causing cells to be subjected to ionic toxicity Developmental plasticity in the root system is an important strategy allowing plants to cope with environmental stresses including salinity. Salinity-induced plasticity occurs in a number of auxin-dependent root development processes, including primary root elongation, lateral root (LR) growth, root hair formation, and halotropism. It is known that microRNA390 (miR390), trans-acting small interference RNAs (tasiRNAs) and AUXIN RESPONSE FACTORs (ARFs) form a regulatory module involved in controlling lateral root (LR) growth but is this module also involved in  salt-induced developmental plasticity in roots?  He et al. (10.1104/pp.17.01559) now report that miR390 expression was strongly induced by exposure to salt during LR formation in poplar (Populus spp.) plants. The overexpression of miR390 stimulated LR development and increased salt tolerance, whereas miR390 knockdown repressed LR growth and compromised salt resistance. ARF proteins are key components of the auxin signaling cascade, and directly control the transcription of primary auxin-responsive genes. The expressions of ARF3.1, ARF3.2, and ARF4 were significantly inhibited by the presence of salt. Moreover, the transcript abundances of these three ARFs were dramatically decreased in the miR390-overexpressing line but increased in the miR390– knockdown line. These results and many others discussed in the paper indicate that the miR390/TAS3/ARF module, an evolutionarily conserved pathway, is involved in the salt-induced regulation of LR development in poplar via the auxin pathway.