Male fertility in angiosperms requires specific spatiotemporal gene expression patterns and cellular differentiation during male reproductive development (Wilson and Zhang, 2009; Lin et al., 2017). The formation of the male gametophyte begins inside the anther with the formation of a large microspore mother cell, which eventually forms into individual microgametophytes (pollen grains). Initially, microgametophytes rely on nutrients and molecules arising from the coordinated degradation of the tapetum, the innermost layer of the anther (Li et al., 2006). Later, pollen maturation requires nutrients provided by starch and/or lipids. However, the genes encoding lipid-modifying enzymes such as lipases and esterases and the associated regulatory mechanisms in plant male fertility remain elusive. 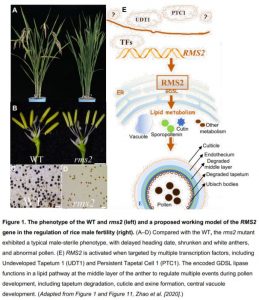 To identify the molecular mechanism underlying pollen failure in the mutant, the authors carried out a histological analysis of developing rms2 pollen. rms2 mutant pollen can successfully go through the early stages of development, but becomes abnormal at the start of the vacuolated pollen stage prior to microgametogenesis. Compared with the wild type, the authors didn’t observe the large vacuolated microspores but found an intact tapetum and no sign of degradation at this stage just prior to microspore mitosis I. Furthermore, the delayed synthesis of anther cuticle and pollen exine observed in the mutant, coincides with the delayed degradation of the tapetum. Thus, pollen maturation probably fails in the rms2 mutant due to a disruption of nutrient filling that is supported by proper degradation of the tapetum.

The authors found that the rms2 phenotype is due to a single recessive nuclear gene, which they mapped and identified as encoding a GDSL lipase. Spatiotemporal expression analysis showed that RMS2 is predominantly transcribed in the anther during the early stages of pollen development. By screening the interactions with key male-fertility regulators, the groups revealed that RMS2 is targeted by at least by two transcription factors, including Undeveloped Tapetum 1 (UDT1) and Persistent Tapetal Cell 1 (PTC1), which serve as essential regulators during early tapetum development.

By conducting a GFP-labeled assay, the group showed that RMS2 is localized to the endoplasmic reticulum (ER). Based on the annotated GDSL domain, the authors hypothesized that RMS2 may possess hydrolase activity and function in lipid metabolism. However, rice RMS2 clusters far away from other GDSL proteins with diverse roles in plant growth and defense and a recently identified maize protein ZmMs30 that causes maize male sterility, suggesting RMS2 has distinct roles in rice male fertility (Lee et al., 2009; Kikuta et al., 2012; Gao et al., 2017; An et al., 2019; Watkins et al., 2019).

Although recombinant RMS2 did not exhibit hydrolase activity in an in vitro assay, total anther proteins isolated from rms2 had reduced hydrolytic activity, suggesting that RMS2 has general lipase activity. Furthermore, the group conducted a comparative metabolomic analysis and established that the metabolic profiles of rms2 pollen and anthers was strikingly different from those of wild-type samples. In addition to revealing differences in lipid metabolites, metabolomic analysis also revealed altered levels of several plant hormones, including gibberellin, auxin, and jasmonic acid. The extensive changes in primary and secondary metabolic pathways suggest that RMS2 may be involved not only in lipid metabolism but also in other unknown pathways that regulate male fertility.

The authors present a model showing how RMS2 contributes to anther and pollen development in rice (Figure 1E). When male-fertility transcriptional regulators bind to the RMS2 promoter, the gene is expressed predominantly in the developing anther. The encoded ER-localized GDSL lipase functions during pollen mitosis to control tapetal degradation, the formation of anther cuticle, pollen exine, and the central vacuole. All of these events are required for pollen development and maturation. The functions of RMS2 in rice male sterility make it a promising genetic resource for hybrid rice breeding. Further research is needed to investigate whether the mutation in RMS2 affects other important agronomic traits.

A Catalytic Inhibitor of Cellulose Biosynthesis in the Toolbox 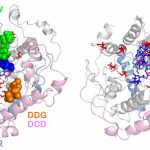 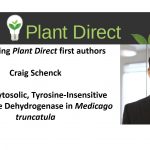