By He Zhao and Jinsong Zhang, Institute of Genetics and Developmental Biology, Chinese Academy of Sciences

Background: The plant hormone ethylene plays essential roles in plant growth and development and response to stress. In Arabidopsis, the ethylene signaling pathway is well-characterized. Ethylene is perceived by a family of endoplasmic reticulum membrane-localized ethylene receptors. Upon ethylene binding, the receptors are inactivated and fail to activate the kinase activity of downstream CTR1 (CONSTITUTIVE TRIPLE RESPONSE 1), resulting in the dephosphorylation of EIN2 (ETHYLENE INSENSITIVE 2). Then ethylene signaling is triggered. In semiaquatic rice, ethylene plays essential roles in adaptive responses to hypoxia conditions (when the rice is submerged) and regulates multiple agronomic traits, its signaling mechanism in rice is largely unclear. Revealing the ethylene signaling mechanism in rice should facilitate improvement of stress adaptation and relevant agronomic traits in crops. 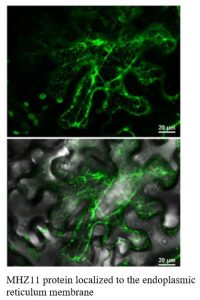 Question: The regulation of ethylene signal transduction is largely unclear in crops such as rice. We wanted to explore whether there are new components or regulatory mechanisms in the ethylene signaling pathway of rice compared with that of Arabidopsis.

Findings: We identified the GDSL family lipase MHZ11 as a positive regulator of ethylene signaling in rice roots. MHZ11 localizes to the endoplasmic reticulum membrane and hydrolyzes phospholipids, producing lyso-phospholipids and free fatty acids. The free fatty acids are likely further transferred to sterols to produce sterol esters, causing a low level of free sterols on the endoplasmic reticulum membrane. The reduced sterol level may impair the interaction of the ethylene receptors and OsCTR2 (the rice homolog of Arabidopsis CTR1), and deactivates OsCTR2 for triggering of signaling upon ethylene treatment. We propose that by maintaining a low sterol level on the endoplasmic reticulum membrane, MHZ11 facilitates the ethylene-triggered inactivation of OsCTR2 for downstream signaling.

Next steps: Numerous lipid species were affected by MHZ11 activity in our lipid profile data. While we find a potential role of low sterol level in ethylene-triggered OsCTR2 inactivation in rice roots, the possibility that other lipid species participate in this process cannot be excluded, which could be further explored. 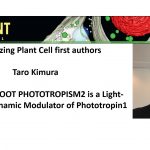