Tropic movement in plants (movement in relation to a directional stimulus) has fascinated thinkers since ancient times (reviewed in Whippo and Hangarter, 2006). This interest has led us to a good molecular understanding of how for example, plants direct their shoots towards light and their roots towards water. However, this is not the only form of movement in plants. Nastic movements occur in response to non-directional environmental stimuli such as temperature. Warm temperatures promote the raising of leaves in several species (a process termed thermonasty). In comparison to tropic movements, nastic movement in plants is poorly understood. Here, Young-Joon Park and colleagues (Park et al 2019) use an exceptionally broad range of techniques to provide a deep mechanistic insight into how thermonasty occurs in Arabidopsis thaliana.

To start with, the researchers confirmed that thermonasty truly is a nastic response and showed that it is independent from directional cues such as light or gravity. Previous studies have shown that the nastic movement of leaves is dependent upon differential growth responses on either side of the petiole (Polko et al., 2012). To gain mechanistic insights, the group focused on differences between the upper (adaxial) and lower (abaxial) sides of the petiole. They found that at warmer temperatures, several auxin-induced genes were induced in the abaxial half of the petiole. This upregulation was dependent upon the transcription factor PHYTOCHROME INTERACTING FACTOR 4 (PIF4), which is required for many aspects of thermomorphogenesis (Koini et al., 2009), and the auxin efflux carrier, PIN-FORMED 3 (PIN3).

The group investigated the subcellular localisation of PIN3 in high-temperature treated plants. They found that warm temperatures promoted the accumulation of PIN3 at the lower membrane of abaxial endodermal cells. As this likely channelled auxin to the abaxial epidermis, the authors suggest that this process underlies asymmetric growth of the petiole. The authors then showed that PIN3 polarity was disturbed in plants with altered PINOID (PID) expression, hinting that PID could play a role in establishing this pattern. They found that high temperature promoted PID expression in the abaxial petiole and that this required PIF4. The group then showed that PIF4 directly binds to the PID promoter and, notably, that PIF4 binding to the PID promoter was enriched in the abaxial side of the petiole at warm temperatures. 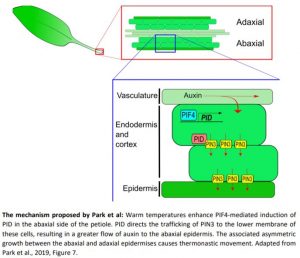 But how then is the asymmetry in PIF4 binding to the PID promoter achieved? The researchers found that the leaf polarity-determining ASYMMETRIC LEAVES 1 (AS1) is required for this preferential binding (presumably by specifying ‘abaxial-ness’ during petiole development). They also showed that the PID promoter becomes acetylated at histone 4 (an active transcriptional marker) at high temperatures, largely in the abaxial side of the petiole. To round their manuscript off, the researchers greatly widened their scope to ask why plants raise their leaves at high temperature in the first place. In a pleasingly straight-forward experiment, the authors show that the non-thermonastic pif4 mutant has warmer leaves at high temperature, but this can be rescued by simply supporting its leaves with plastic tags. Similarly, securing wild type leaves close to the soil results in warmer leaves. These experiments lend further weight to the existing hypothesis that thermonasty functions to promote leaf-cooling (Crawford et al., 2012).

In providing an in-depth mechanism for thermonasty, the authors have made a substantial contribution to our understanding of how warm temperatures affect plant morphology. There are however some outstanding questions. For example, it is unclear whether the acetylation of histones within the PID promoter causes enhanced PIF4 binding or whether it is a product of this (a recent study found that PIF7 recruits histone modifiers to its target genes (Peng et al., 2018)). Another thing to note is that although the authors show that high temperatures enhance PIF4 binding to the PID promoter directly in abaxial petioles, it is possible to elicit similar nastic responses by stimulating distant parts of the leaf. Two recent studies demonstrated that application of auxin or far-red light to the very tip of the leaf strongly promotes hyponasty (Michaud et al., 2017; Pantazopoulou et al., 2017), suggesting that there is more than one pathway to asymmetric petiole growth. Despite the outstanding questions, the work presented by Park et al represents a considerable leap forward in our understanding of nastic movements. Further investigation into this area will help us to understand how, in a warming environment, plant leaves manage to keep their cool.

The mechanism proposed by Park et al: Warm temperatures enhance PIF4-mediated induction of PID in the abaxial side of the petiole. PID directs the trafficking of PIN3 to the lower membrane of these cells, resulting in a greater flow of auxin to the abaxial epidermis. The associated asymmetric growth between the abaxial and adaxial epidermises causes thermonastic movement. Adapted from Park et al., 2019, Figure 7.

MYC Transcription Factors are Functionally Conserved between Bryophytes and... 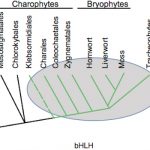 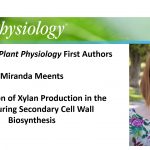