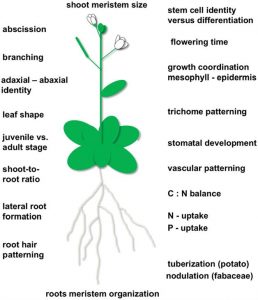 Of course plants need to communicate between their different parts, and our understanding of these crucial signals has been advancing rapidly. This issue of Plant Cell Physiology includes a set of papers highlighting recent findings. A meeting report by Kiba on the Integrative Graduate Education and Research Program in Green Natural Sciences (IGER) International Symposium on Long-Distance Signaling in Plants, which was held on November 21, 2017 at Nagoya University, Japan, introduces the issue. Articles in the collection profile key types of signals that have been identified, which include mRNAs, miRNAs and other non-coding RNAs, proteins, hormones, and small peptide hormones, as well as the functions of these mobile signals, including developmental regulation, nutrient homeostasis, control of nodulation, and response to water deficit. It’s a nice collection of articles to bring you up to speed with this exciting research topic. (Summary by Mary Williams) Plant Cell Physiol. Volume 59, Issue 9, September 2018 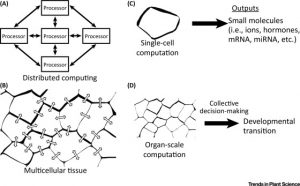 The great strides we’ve made in understanding how plants perceive their environment, from light to pathogens to nutrients, haven’t been matched with an understanding of what they do with all that information; how do so many inputs get integrated into a single or few responses? And how does the information processing integrate spatially across the organism? To address these questions, Bassel applies a computational perspective to plant development. He describes how individual cells in a plant provide a distributed computing architecture, providing robustness. He further explores this model by describing the cell-by-cell vernalization response (silencing of FLC) that takes place at the shoot apical meristem, and the spatially separate responses to ABA and GA that contribute to the breakage of seed dormancy. He also observes that the plasmodesmata connections between cells are switchable, allowing distributed circuits to be dynamically reconfigured. Finally, he observes that plants provide a novel model for bio-inspired computing, and that advances in understaning computing networks can help us to better understand and reprogram plants. (Summary by Mary Williams) Trends Plant Sci. 10.1016/j.tplants.2018.08.006 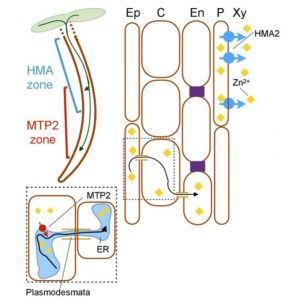 Zinc is an important micronutrient for plants and people. To better understand Zn uptake and homeostasis, Sinclair et al. used a transcriptomic approach to identify genes abnormally expressed in zinc-transporter mutants (hma2 hma4). In these mutants, Zn accumulates in roots but isn’t effectively transported to shoots. The authors found that MTP2 (encoding a metal transporter protein) is highly expressed in roots of shoot Zn-deficient plants, indicating that a systemic signal from shoot to root controls its expression. Interestingly, MTP2 accumulates on the ER membrane.  The authors suggest that its function is to transport Zn into the ER lumen, facilitating its movement from cell-to-cell via plasmadematal desmotubules. (Summary by Mary Williams) Plant Cell 10.1105/tpc.18.00207 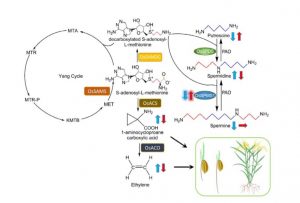 Polyamines including spermine and spermidine are present in all eukaryotes and have diverse roles. In plants they have been implicated in responses ranging from abiotic and biotic stresses to grain filling. Tao et al. examined the function of OsPMS1, encoding a spermine synthase, through genetic methods including RNAi and overexpression approaches. Knocking out OsPMS1 leads to an accumulation of spermidine but reduced levels of spermine, and also an increase in grain yields (both grain size and number); overexpression lines showed the opposite effects. The RNAi lines also showed elevated levels of ethylene accumulation, possibly because polyamines and ethylene share a common precursor, S-adenosyl methionine. Plant Physiol. (Summary by Mary Williams)  10.1104/pp.18.00877 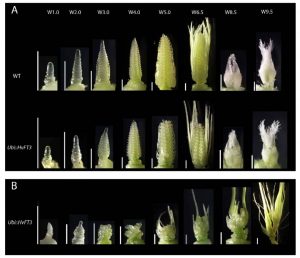 FT encodes a mobile protein that carries a flower-promoting signal to the shoot apical meristem. In most plants, the FT gene has duplicated and diversified. Mulki et al. investigated the function of FT3 (HvFT3) in barley. Prior work showed that overexpression of HvFT1 accellerated the initiation and development of flowers. By contrast, HvFT3 overexpression accelerated flowering time in plants grown in long days but not short days, and although the timing of floral initiation was accelerated, floral development itself was not accelerated, indicating that HvFT3 is functionally distinct from HvFT1. The authors carried out a transcriptomic study of the HvFT3 overexpressing plants and found differential expression of several genes involved in floral initiation, flower development and spike architecture. (Summary by Mary Williams) Plant Physiol. 10.1104/pp.18.00236 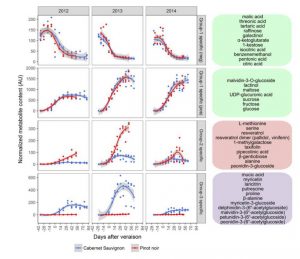 Do you know the difference between a wine made from Pinot noir grapes and one made from Cabernet Sauvignon grapes? Most people can taste a difference, but to really understand the wines you might want to go a bit deeper through metabolomic and transcriptomic approaches, as done by Fasoli et al. (in a project funded by a large California winery). The authors profiled the grapes from early development through veraison (onset of ripening) and the mature stages. Metabolomics showed that pre-ripening, the profiles of the two grapes clustered together, but that at later time points the grapes showed varietally-distinct metabolite profiles (which shouldn’t surpise wine afficianados). A similar pattern was seen with the transcriptional profiling, with similar genes in both varieties associated with the pre-ripening developmental stage, and varietal differences in later stages, including in genes involved in anthocyanin, phenolics and resveratrol production. The authors developmentally mapped genes and identified marker genes associated with various developmental and ripening phases. (Summary by Mary Williams) Plant Physiol. 10.1104/pp.18.00559 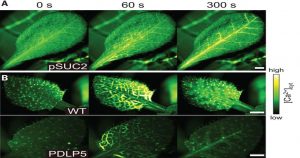 Several years of intensive research have revealed a suite of mobile signals that travel long-distances to inform meristems on developmental phase transitions or to protect distal plant tissues from abiotic or biotic stressors. In a new article published in Science, Toyota et al. (2018) identify a role for glutamate as a wound-induced signal that activates long-distance stress signaling. The authors demonstrate that apoplastic glutamate increased in wounded plants and is sensed by GLUTAMATE RECEPTOR-LIKE FAMILY proteins. This recognition leads to an astonishingly robust wave of intracellular calcium accumulation that propagates quickly through the plant phloem and plasmodesmata to reach distal tissues. Wound and glutamate-triggered systemic signaling ultimately activates defense responses throughout the plant body, thus protecting plants from future wound-related stressors. (Summary by Phil Carella) Science 10.1126/science.aat7744

A shoot-derived microRNA ensures susceptibility to beneficial rhizobacteria in legumes 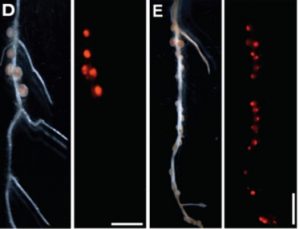 Nitrogen-fixing rhizobacteria and leguminous plants engage in a tightly controlled root symbiosis resulting from bacteria-to-plant as well as (plant) shoot-to-root communication. This interplay controls the initiation and maintenance of root nodule development while preventing the over-production of nodules. In a keystone article published in Science, Tsikou et al. discovered that a shoot-derived microRNA is responsible for maintaining a susceptible state in legume roots to allow for the entry of symbiotic rhizobacteria. The group demonstrate that the shoot-derived microRNA miR2111 travels from shoots to roots to negatively regulate the kelch repeat F-box protein TOO MUCH LOVE (TML). This miRNA-mediated suppression of TML sensitizes roots to the presence of rhizobacterial Nod factors ensuring susceptibility and subsequent microbial colonization. Once colonized, miRNA2111 itself is negatively regulated both in roots and shoots, which de-represses TML and prevents hypernodulation. Together these data very elegantly tease apart the sophisticated long-distance signaling mechanisms employed by legumes to acquire and control bacterial symbionts in an efficient and sustainable manner. (Summary by Phil Carella) Science 10.1126/science.aat6907

Arabidopsis seeds delay germination in the presence of pathogens 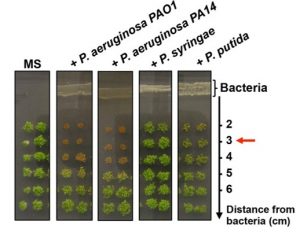 The rhizosphere represents a complex and dynamic environment that poses many challenges for seed germination and seedling establishment. While a number of well-characterized abiotic factors and hormone signaling pathways are known to contribute to the initiation of seed germination, our current understanding of how plant pathogenic bacteria impact germination is poorly resolved. In a recent article published in eLIFE, Chahtane et al. (2018) provide new evidence that the bacteria Pseudomonas auregenosa strongly suppresses seed germination in Arabidopsis thaliana. The authors show that the bacterial compound AMB (L-2-amino-4-methoxy-trans-3-butenoic acid) is a strong suppressor of seed germination, which itself is regulated by bacterial quorum sensing machinery. Genetic analyses demonstrated that AMB suppression of seed germination functions through DELLA regulators that induce the known germination suppression factor ABI5. Collectively, the results suggest that seeds monitor for pathogenic bacteria in the rhizosphere to prevent unfavorable germination in hostile environments detrimental for seedling establishment.  (Summary by Phil Carella) eLIFE 10.7554/eLife.37082 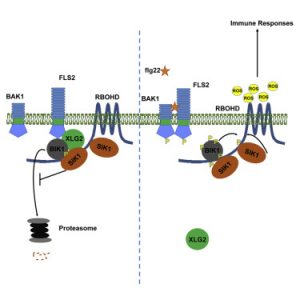 Cell surface pattern-recognition receptors (PRRs) such as FLS2 that recognize conserved pathogen features are important contributors to plant defenses against pathogens, triggering the so-called Pattern-Triggered Immunity (PTI) response. Pattern recognition by PRRs triggers the production of extracellular reactive oxygen species (ROS), which both promotes additional defense responses and can help to weaken or kill the pathogen. Zhang et al. identified a MAP4 kinase, SIK1, that connects the PRRs with the activation of a plasma-membrane localized NADPH oxidase that produces extracellular ROS, thus connecting two parts of the PTI pathway. Surprisingly, loss-of-function mutants of SIK1 showed more robust defense against pathogens, which the authors identified as arising due to elevated salicylic acid (SA) levels. However, when they suppressed SA accumulation (though expression of salicylate hydroxylase NahG), the sak1 mutants showed reduced PTI responsiveness. Thus, the authors have identified an important piece of the plant’s defense response. (Summary by Mary Williams) Cell Host Microbe 10.1016/j.chom.2018.08.007 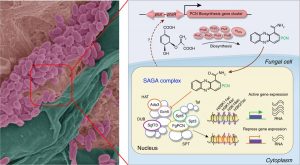 Sometimes the plant is a relatively passive host upon which other organisms engage in dynamic interactions. Chen et al. showed that a wheat head-associated bacterium, Pseudomonas piscium, produces antifungal compounds that inhibit the growth of a plant pathogenic fungus, Fusarium graminearum. The authors started by culturing more than 12,000 bacterial isolates, from which they found that the P. piscium acts as a bacterial biocontrol agent against the fungus. They identified the antifungal compound to be phenazine-1-carboxamide (PCN); deletion of this biosynthetic pathway eliminated the biocontrol effect. By surveying F. graminearum deletion mutants, they found a strain resistant to PCN, and showed that PCN targets a fungal histone acetylase. Interestingly, genetic deletion of this histone acetylase similarly reduced the fungal virulence. These insights can help protect grain crops from this detrimental fungal pathogen. (Summary by Mary Williams) Nature Comms. 10.1038/s41467-018-05683-7 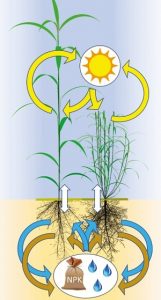 Mixing different plant species in a single field increases productivity by exploiting species complementarities for capturing resources (i.e. water, nutrients, sunlight). Both competition avoidance responses and individual organ accommodations to the changing environment  contribute to this complementarity. However, modelling is needed to further understand the drivers and dynamics of these complementary-based productivity increases. In this paper, Evers and colleagues advocate for using functional-structural plant (FSP) modelling to elucidate complementary growth responses of species mixtures. FSP modelling uses the behavior of individual organisms interacting with each other through competitive and completmentary resource usage to model crop performance. These models could aid mixed-species research and promote the use of mixtures in agricultural settings. (Summary by Julia Miller) J. Exp. Bot. 10.1093/jxb/ery288