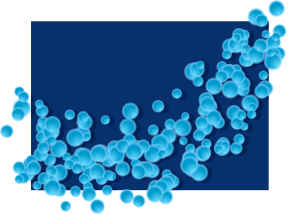 Three letters to Plant Physiology address the role of vesicles in auxin transport, discussing the evidence and conclusions from a recently published paper from three perspectives. Does auxin accumulate in endocytic vesicles? If so, how, and why? The Letters address both the methods used and the intrepetation of the study’s results. This link takes you to a Letter by Robinson et al., and a Rebuttle by Baluška et al. This link takes you to another Letter by Hertel on the question of auxin in vesicles.  (Summary by Mary Williams) Plant Physiol. 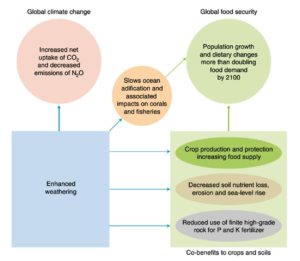 Rising atmospheric CO2 levels are causing wide-ranging climate abnormalities. Beerling et al. discuss ways to capture CO2 in soils through augmenting soils with crushed basalt, or silicate-rich wastes such as sugarcane mill ash. As the added rock weathers, it reacts with gaseous CO2 to release cations (Ca2+ and Mg2+) and alkalinizing bicarbonate ions (HCO3–), which when leached into oceans can counteract increasing ocean acidity. Thus, enhanced weathering delivers three benefits: lowering atmospheric CO2, enhancing the availability of nutrients in soil, and counteracting ocean acidification. The authors discuss pros and cons of different types of rock (some are high in harmful Ni and Cr and so detrimental to plant life) and the energetic and economic costs, as well as areas where additional research is suggested. They conclude that “farming with rocks”  is an approach that should be explored further as an effort to achieve the UN’s Sustainable Development Goals. (Summary by Mary Williams) Nature Plants 10.1038/s41477-018-0108-y

Lichen are quite special, as they don’t exist independently of their partnership.  Lichen are composed of a fungal partner and a photosynthetic partner (the algal or cyanobacterial photobiont), and these partnerships have evolved independently many times.  Spribille provides an overview of some of the many questions that remain unanswered in the study of lichen and the challenges in developing accurate lichen taxonomies, including the relatively new finding that most lichen also include yeast or bacteria as fundamental participants. (Summary by Mary Williams) Curr. Opin. Plant Biol. 10.1016/j.pbi.2018.02.007

Review. Great moments in evolution: the conquest of land by plants ($) 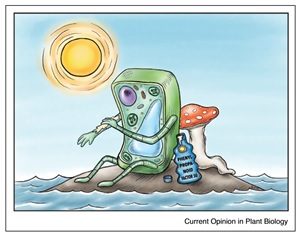 Plant occupation of land was a crucial step in evolution, without which life as we know it today would not exist. Stefan Rensing takes us on an evolutionary journey, discussing the advent of photosynthesis in cyanobacteria and eukaryotic algae, which led to atmospheric oxygen, to plant terrestrialization, which required complex processes such as the development of protective phenylpropanoids and numerous phytohormones (both discussed here). Owing to the lack of fossil records, existing species are often used to infer evolutionary events. In the hopes of unraveling the mystery of early land plant evolution, this review focuses on the transition of organisms from water to land, the subsequent emergence of non-vascular lineages, and  the comparisons of these early organisms to vascular plants. (Summary by Alecia Biel) Curr Opin Plant Bio. 10.1016/j.pbi.2018.02.006. 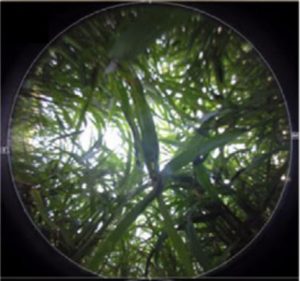 Maximizing and improving biomass productivity is essential for grower profitability, to protect natural resources, and to meet global population needs. Unfortunately, assessing biomass usually requires destructive sampling which delays the process for breeding high biomass germplasm. Remote sensing is a method of non-destructive sampling using photographs that are scaled and digitally measured for plant height, canopy width, biomass, etc. Remote sensing has a high correlation with destructive sampling for biomass production and its genetic components (qualitative trait loci or QTL), but requires specialized equipment that could cost over $100,000. A cost-ffective alternative was tested to detect biomass production and variation using a GoPro Hero 3+. Biomass measurements corresponded to all biomass QTLs related to those identified with destructive biomass harvesting. This simple solution could be used with diverse crop breeding programs to quickly collect data to uncover the genetic dynamics of biomass productivity. (Summary by Jason Settler) Plant Direct 10.1002/pld3.41 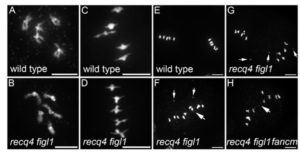 To generate new plant varieties with desirable traits, plant geneticists cross existing varieties that contain the characters they want to combine. The genetic variability is obtained thanks to events called crossovers, in which segments of homologous chromosomes are swapped during meiosis. The frequency of crossovers, however, depends on the species and is often a limiting factor in obtaining sufficient genetic variability for breeding programs. Fernandes et al. found a way to circumvent this limitation. They generated Arabidopsis mutants lacking three genes, named FANCM, RECQA/B and FIGL1. All mutants displayed higher levels of crossovers. The highest level was observed in the triple mutant (almost 8 fold more than in the wild type), thus showing that these three genes act in different cellular pathways. The triple mutant displayed a mild reduction in plant fertility and no visible phenotypic defects. Thus, the same mutations introduced in crop plants are likely to increase genetic variability without affecting other plant traits, and therefore may soon become precious tools for breeding programs. (Summary by Elisa Dell’Aglio). PNAS 10.1073/pnas.1713078114 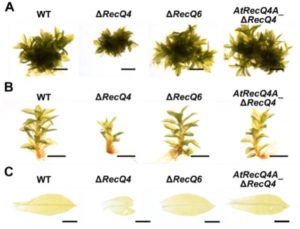 DNA repair is of course a crucial process, and many DNA repair enzymes are conserved across all domains of life. In humans, deficiency in the RecQ family of DNA helicase repair enzymes leads to premature aging and a predisposition to cancer. Previous studies have identified the RecQ family in Arabidopsis and rice. Wiedemann et al. characterize them in moss (Physcomitrella patens). Through knock-out and cross-species complementation studies they find different functions for two members of this family, PpRecQ4 and PpRecQ6. PpRecQ4 is involved in DNA repair and is a repressor of homologous DNA recombination, whereas PpRecQ6 is an enhancer of homologous DNA recombination. Interestingly, Arabidopsis seems to lack a homolog of RecQ6. This finding may help to explain why homologous DNA recombination (an important tool for gene characterization in moss) occurs so much more effectively in moss than Arabidopsis. (Summary by Mary Williams) Plant Cell 10.1105/tpc.17.00632

A functional study of AUXILIN-LIKE1 and 2, two putative clathrin uncoating factors in Arabidopsis 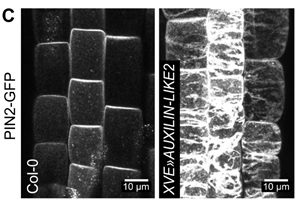 Trafficking within a cell can occur through clathrin-mediated endocytosis (CME). CME depends upon coating plasma membrane vesicles with clathrin and adaptor proteins but the mechanism is unclear in plants. Adamowski et al. establish a means with which to study this process in order to further elucidate the machinery involved in plant endocytosis. Proteins involved in CME were identified by Tandem Affinity Purification (TAP), utilizing the clathrin light chain as a protein interactor, in collaboration with Mass Spectrometry. Among the identified proteins were two homologous proteins named AUXILIN-LIKE1 and AUXILIN-LIKE2, so called due to being identical to the auxilin-like protein which has been described as a putative uncoating factor in Arabidopsis. Both proteins localize to the plasma membrane (PM) and the cell plate. The authors created inducible-overexpression lines with these proteins, which resulted in inhibition of endocytosis, increase in vacuolar volume, and appeared to result in loss of clathrin specifically from the PM pool. On the other hand, auxin-like1/2 mutants did not appear to exhibit any defects. This study highlights several important tools that can be used to study CME and adds additional interactors in this process. (Summary by Alecia Biel) Plant Cell. 10.1105/tpc.17.00785

Plant growth and development consist of highly organized cellular patterns and depend on the directional growth and orientation of cells. Understanding microtubule dynamics is key to deciphering the formation of cellular shape and growth direction. In this research, Chakrabortty  et al. employed analytical and computational modeling approaches to simulate microtubule dynamics. They used confocal images and segmented different cell shapes using morphographX software. For each segmented shape, they created a triangulated surface mesh and tagged different cell-edges and cell-faces by using meshLab software. They exploited the model to study the geometry of leaf pavement cells of Arabidopsis thaliana, Nicotiana benthamiana and Hedera helix. (Summary by Arif Ashraf) PLOS Computational Biology: 10.1371/journal.pcbi.1005959 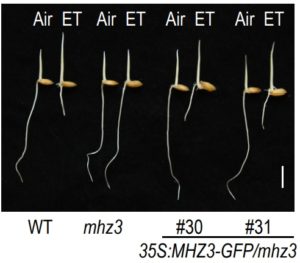 Much of the ethylene biosynthesis and signaling pathway has been characterized from study of  the dicot Arabidopsis. In this study, Ma et al. have characterized the ethylene insensitive mutant mhz3 from rice. MHZ3 is a membrane protein localized to the endoplasmic reticulum that interacts with OsEIN2 (ETHYLENE INSENSITIVE2). OsEIN2 contains a Nramp-like membrane-spanning domain and nuclear-localization signal. MHZ3 interacts with OsEIN2 through the Nramp-like domain and stabilizes the protein by preventing its ubiquitination. This work introduces the role of Nramp-like domain of OsEIN2 in ethylene signaling. (Summary by Arif Ashraf) PNAS: 10.1073/pnas.1718377115

BRI1 (BRASSINOSTEROID INSENSITIVE1) is a plasma-membrane localized brassinosteroid (BR) receptor that is endocytosed to internal membranes following BR binding. In this study, Zhou, Liu et al. provide a mechanistic model of BRI1 endocytosis through ubiquitination. They identified two E3 ubiquitin ligases, PUB12 and PUB13, responsible for the ubiquitination of BRI1. Additionally, they showed through a co-immunoprecipitation study that BR induces the association of BRI1 with PUB13. In this case, BRI1 acts as both a substrate and activator of PUB13. BRI1 phosphorylates PUB13 at serine 344 between the U-box domain and the first ARM repeat. Along with these observations, pub12 pub13 mutant shows the impairment of BRI1 endocytosis. (Summary by Arif Ashraf) PNAS: 10.1073/pnas.1712251115 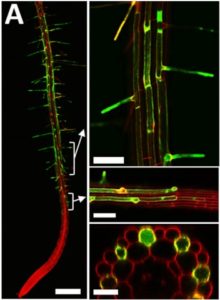 Root hair outgrowth requires the plant hormone auxin and polarized tip growth and cell wall deposition. Schoenaers et al. showed that the plasma membrane-localized receptor-like kinase ERULUS (ERU) regulates tip growth in root hairs. ERU is regulated by auxin via ARF7 and ARF19 transcription factors, which directly bind to the promoter of ERU. The function of ERU is phosphorylation dependent, and exogenous NAA induces the phosphorylation of ERU at the cytoplasmic domain. ERU alters cell wall composition and pectin metabolism via PME (Pectin Methyltransferase) regulation. Phosphoproteomic results indicated that in the eru mutant phosphopeptide abundance of FER (FERONIA) was increased and that of AHA1/2 (H+-ATPase 1/2) was decreased. Taken together, this work shows the function of ERULUS in auxin-regulated alteration of cell wall composition for root hair tip growth. (Summary by Arif Ashraf) Current Biology: 10.1016/j.cub.2018.01.050

Darkened leaves use different metabolic strategies for senescence and survival 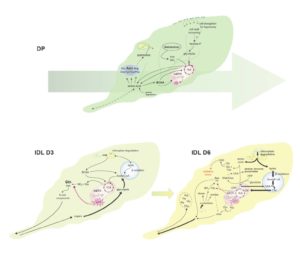 Put a plant into full darkness and it will gradually senesce, whereas as individually darkened leaf (IDL) will undergo radid senescence. Law et al. used transcriptomic and metabolomic methods to identify the metabolic responses of plants to these two conditions. In fully darkened plants, metabolism is generally suppressed and photosynthetic capacity retained, which is in effect a survival strategy. Shade avoidance responses including stem or petiole elongation also occurs through cell wall loosening. By contrast, an IDL shows a more active catabolic response typical of developmental leaf senescence, resulting in a mobilizing of resources from the leaf. The authors observe that these studies will help to develop strategies to enhance the quality of produce after harvest. (Summary by Mary Williams) Plant Physiol. 10.1104/pp.18.00062 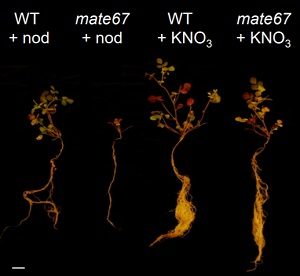 Iron, an essential nutrient for plants and symbiotic nitrogen-fixing bacteria, needs to be complexed with organic chelators (i.e. citrate) for in planta transport. Kryvoruchko and colleagues have identified a nodule-specific citrate transporter of Medicago truncatula, MtMATE67 (Medicago truncatula Multidrug and Toxic Compound Extrusion 67) using in planta localization, mutant analysis and electrophysiological analysis. MtMATE67 localizes to the plasma membrane of cells in the nodule, as well as the symbiosome membrane around bacteroids (nitrogen-fixing structures of Sinorhizobium meliloti). When the MtMATE67 is expressed in oocytes, the exportation of citrate happens in an iron-activated manner. MtMATE67 mutants accumulate iron in the apoplast of nodule cells, and have a decrease in symbiotic nitrogen fixation and a decrease in plant growth. Thus, MtMATE67 plays an important role in mediating citrate efflux from nodule cells to ensure iron mobility and availability for rhizobial bacteroids. (Summary by Julia Miller) Plant Physiol. 10.1104/pp.17.01538

A computational framework for cortical microtubule dynamics in realistically...
Scroll to top