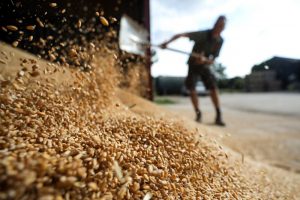 On 25 July, the European Court of Justice ruled that “Organisms obtained by mutagenesis are GMOs and are, in principle, subject to the obligations laid down by the GMO Directive,” and “The Court of Justice takes the view, first of all, that organisms obtained by mutagenesis are GMOs within the meaning of the GMO Directive, in so far as the techniques and methods of mutagenesis alter the genetic material of an organism in a way that does not occur naturally.” Of course this is bad news for those of us who were hoping for a different outcome, one based on the scientific understanding of the relative risks and potential rewards of genome editing through CRISPR/Cas9 mutagenesis. You can read how experts in the EU have responded to this news here, and read more at GARNet, BBC, Reuters, Nature. 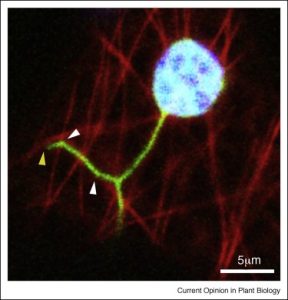 Stromules (or stroma-filled tubules) have been observed for more than 100 years, but uncertainty remains about their formation and function. Stromules are extensions of the plastid membrane that form highly dynamic tubule-like structures that sometimes interact with other plastids or organelles. Hypothetical functions include increasing the surface area of plastids (for increased transport), movement of proteins or metabolites between organelles, plastid anchoring, and signaling. Erickson and Schattat review recent studies on the basis of stromule formation, and attempt to consolidate data from in vitro and in planta studies. After reviewing recent studies, the authors conclude, “Current data suggest that a combination of actin, microtubules and associated motor proteins contribute to stromule regulation, but not via a single mechanism.” (Summary by Mary Williams) Curr. Opin. Plant Biol.  10.1016/j.pbi.2018.07.003 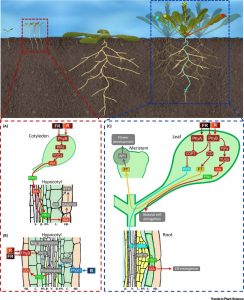 Light is arguably one of the most important signals recognized by plants. Not surprisingly, plants exhibit a wide range of light responses, ranging from cell-specific to large-scale. Küpers et al. review these responses, with an emphasis on their spatial scales. For example, the production of extrafloral nectar from the leaf and leaf lamina growth inhibition are both local responses, whereas root development and floral transition involve inter-organ signalling including long-distance transport of proteins that convey light information (e.g., HY5 and FT). Even responses that appear seemingly local, such as hypocotyl elongation and petiole hyponasty, “are largely regulated by distal light-quality signals in the cotyledons and leaf tip, respectively.” Trends Plant Sci. 10.1016/j.tplants.2018.06.011 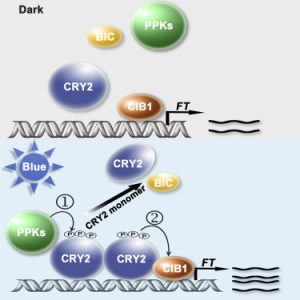 Cryptochromes (CRYs) are blue-light receptors that were first identified in plants more than 20 years ago, but with modes of action that have remained obscure. Yang, Mo, and Yu, et al. reassembled this blue-light signaling module in mammalian cells in order to better understand CRY function. Previously, they showed that in this system CRY2 absorbs blue light, dimerizes in response to blue light, and forms blue-light specific photobodies. In this new study, the authors show that CRY2 binds DNA (specifically, the FT gene), that this binding is enhanced by blue light, and that blue-light enhances CRY2’s transcriptional activity, both directly and through its interaction with CIB1. (Summary by Mary Williams) Cell Reports 10.1016/j.celrep.2018.06.069 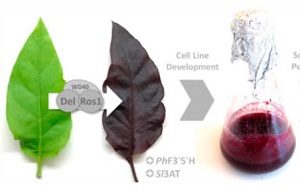 Anthocyanins are common plant pigments that provide dietary benefits, causing an increase in their use as a food coloring agents. However, purifying anthocyanins from current plant sources (such as waste grape skins, red cabbage and berries) is expensive and creates a variable product. Modifying biosynthetic and regulatory genes of anthocyanins can drastically increase anthocyanin production in plants. Appelhagen and colleagues use tobacco (Nicotiana tabacum) cell lines to produce high levels of different anthocyanins. These tobacco cell lines stably produce anthocyanins and the production can be scaled up in fermenters. They also show how this system can be moved into other plant species, such as Arabidopsis. (Summary by Julia Miller) Metabol. Eng. 10.1016/j.ymben.2018.06.004 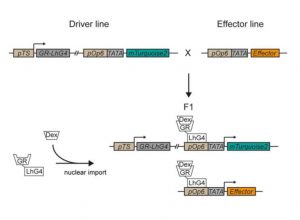 Gene knock-outs and overexpression studies are useful indicators of gene function, but can obscure the gene’s distinct cell-type specific functions. Schürholz and Lopez-Salmeron et al. have developed a set of constructs that allow for precise expression of a gene-of-interest in subsets of cells, accompanied by a fluorescent marker. This system involves “driver” and “effector” lines. The driver lines carry a cassette with two constructs: one construct that consists of a tissue-specific promoter driving expression of a synthetic transcription factor (GR-LhG4) that, in the presence of dexamethasone translocates into the nucleus to switch on transcription, and the other construct that consists of a synthetic promoter responsive to Gr-LhG4 driving expression of the flurorescent reporter mTurquoise. The effector lines carry this same Gr-LhG4-responsive promoter driving expression of the gene-of-interest. By crossing driver and effector lines, the resulting plants express cell-specific, labelled patterns of effector expression. The resulting plant lines are DNA constructs are available from the authors. (Summary by Mary Williams) Plant Physiol. 10.1104/pp.18.00463 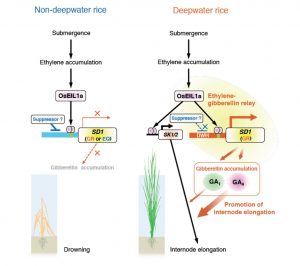 The diverse responses of rice to flooding are really interesting. Many varieties die, some survive by essentially becoming metabolically quiescent to conserve their energy (which involves the Sub1 pathway), and some, called deepwater rice, respond through rapid elongation that elevates their leaves above the floodwaters. Kuroha et al. further characterize the molecular basis for the deepwater rice adaptation. They show that deepwater alleles (DWH) of the SEMIDWARF1 (SD1) gene (encoding a gibberellin biosynthetic gene, widely known through its role as “green-revolution” dwarfing gene) contribute to the flooding elongation response.  The SD1 gene in deepwater haplotypes is expressed at elevated levels in response to flooding-induced ethylene accumulation, leading to elevated gibberellin accumulation and internode elongation.  (Summary by Mary Williams) Science 10.1126/science.aat1577 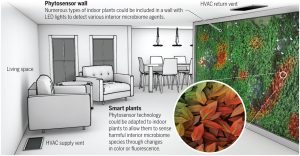 In this review Stewart et al. address the potential use of houseplants as biosensors for harmful agents in the home environment, taking advantage of phytosensor technology already in use in agricultural settings. The authors propose the design of genetically modified plants that carry a synthetic promoter built to sense a specific toxic element and induce the expression of a fluorescent marker gene. Among the plausible harmful agents to monitor are volatile organic compounds produced by mold, viruses and odors. The plants could be mounted on a wall near heating, ventilation and air-conditioning return vents and the fluorescence should be easily detected by using LED lights. The authors’ vision integrates synthetic biology and interior design to improve quality of life and prevent illnesses related to the built environment. (Summary by Mariana Antonietti) Science  10.1126/science.aau2560

Convergent evolution of effector protease recognition by Arabidopsis and barley 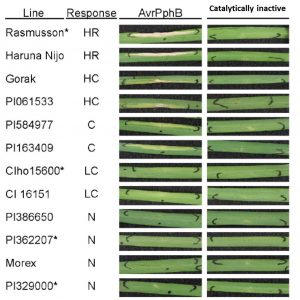 Pathogenic bacteria Pseudomonas syringae produce an effector protein, AvrPphB. The indirect interaction between this bacterial effector and the Arabidopsis resistance (R) protein RPS5 has been characterized previously; AvrPphB is a cysteine protease that targets another plant protein, PBS1, causing it to activate RPS5. Carter and Helm et al. now show that the bacterial effector similarly elicits defense responses in barley, through a barley ortholog of PBS1. Interestingly though, the barley resistance protein, (Pbr1) is not an ortholos of the corresponding Arabidopsis R protein RPB5, indicating convergent evolution of this indirect recognition. The authors conclude that “selection to guard PBS1-like proteins is ancient. Also, the results suggest that PBS1-based decoys may be used to engineer protease effector recognition-based resistance in barley and wheat.” (Summary by Mary Williams)  bioRxiv 10.1101/374264