Congratulations to everyone involved in the launch of the new journal Plants, People, Planet, “… a new cross-disciplinary Open Access journal from the New Phytologist Trust focusing on the interface between plants and society.” I’m sure that we’ll be seeing some terrific articles in this new journal, including some good for teaching. In the first issue, check out Opinion articles by Peter Raven (Saving plants, saving ourselves), Barbara Schaal (Plants and people: Our shared history and future), Sandra Knapp (People and plants: The unbreakable bond), and more.  There is also a feature called “Flora Obscura” that will “showcase some of the most extraordinary plants in the world” – see Chris Thorogood’s very weird offering, “Hydnora: The strangest plant in the world?” (Summary by Mary Williams) https://nph.onlinelibrary.wiley.com/journal/25722611 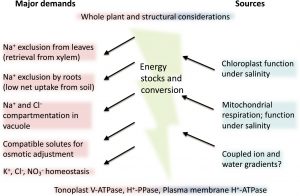 Plants use diverse strategies for salt tolerance, including regulated transport of several different ions and production of compatible organic solutes. In April 2018, a workshop was held to discuss strategies for breeding salt tolerance in plants, with a focus on the energy requirements of various strategies. Some specific approaches for improving salinity tolerance in crops are described here, but clearly pinning down the energy requirements for these various strategies remains a challenge. Workshop participants concluded that “biophysical modelling of salt and water transport in cells, roots, and leaves, incorporating the known transporters and ion gradients, would greatly facilitate our understanding of the energy costs of salinity tolerance in crop plants.” (Summary by Mary Williams) New Phytol. 10.1111/nph.15555 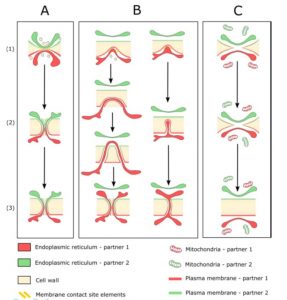 Grafting is an ancient technology and still extremely important in horticulture and food production, including grapes for wine. Although much is known about what scion/shoot combinations work, less is known about successful grafts at the molecular and cellular level. How do two genetically different tissues interact? They must dedifferentiate and then reform as a new functional whole. Current studies are examining the processes that occur during graft formation, signals that cross the junction, and the causes of graft incompatibility. As the authors observe, a greater understanding of these processes can support the development of new scion/stock pairings that could potential aid in adaptation to climate change. (Summary by Mary Williams) J. Exp. Bot. 10.1093/jxb/ery422 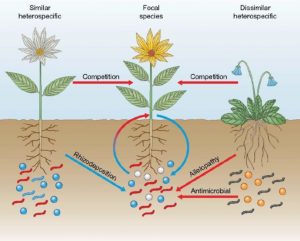 Plant cells have polarity, with the distribution of the auxin transporter protein PIN2 being a well-described example. Glanc et al. investigated how polarity is re-established following cell division. The authors showed that during cytokinesis, protein trafficking is directed towards the central cell plate (site of the new cell wall), but afterwards PIN2 relocalizes to its proper apical position. Using a variety of manipulations and mutants, they investigated several hypothesis as to how polarity is re-established, and found that the positional information seems to be cell-intrinsic. That is, rather than the daughter cell learning which way is up from its neighbors or some other external polarity  (such as auxin), the information appears to be learned from the mother cell. The authors also show that endocytosis is needed for PIN2 repolarization, as is a PINOID-related protein kinase. (Summary by Mary Williams) Nature Plants 10.1038/s41477-018-0318-3 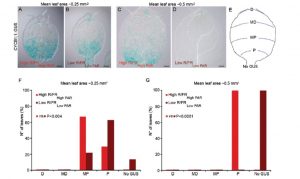 Vegetative shade affects the ratio of red (R) and far-red (FR) light; relative to sunlight, the R/FR ratio is decreased due to absorbance of photosynthetically-active R light by other leaves. Low R/FR ratios cause increased elongation of shaded plant stems and petioles, as the plants strive to raise their photosynthetic tissues above those of their competitors. Carabelli, Possentti and Sessa et al. explored the effect of low R/FR on the development of the leaf blade (lamina). Previous work indicated that leaf blade expansion is decreased in low R/FR, and this new study shows that shade leads to a premature exit from the cell cycle, decreasing the number of cells produced. The authors also showed that several HD-Zip II transcription factors contribute to this effect. (Summary by Mary Williams) J. Exp. Bot. 10.1093/jxb/ery331

This paper is kind of fun because it explores plant leaf and petal shape from an engineering perspective, identifying “fundamental mechanistic insights into how nature invokes mechanics in the evolution of commonly found shapes in plant organs by differential growth.” For each organ, the authors empirically determine growth strain profiles and the parameters β and n, which correlate with the four types of configurations (twisting, helical twisting, saddle bending, and edge waving). They then can replicate these configurations using polyacrylamide hydrogels with embedded strings, in which “growth” and therefore strain is controlled by oxygen-inhibition of polymerization. The authors observe that in addition to contributing to our understanding of plant organ development, their work, “points to pathways to create bioinspired complex 3D shapes that could find applications in such areas as tissue engineering, flexible electronics, and soft robotics.” (Summary by Mary Williams) Proc. Natl. Acad. Sci. USA  10.1073/pnas.1811296115 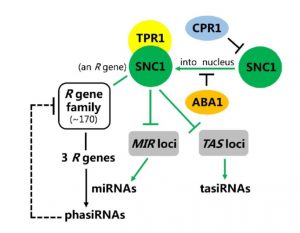 In plants, like people, having an overactive immune response is just as bad as having an underactive one. R genes in plants are key immune components that need to be kept quiet until needed. Previous studies have shown that miRNAs are involved in suppressing R gene expression, in a process that is amplified by phased siRNAs (phasiRNAs). Cai et al. identified a mechanism by which this suppression system is reversed by an active R gene product, SNC1, which represses the expression of miRNAs and phasiRNAs, thus releasing R genes from suppression. The authors summarize, “Taken together, this study suggests an R gene-miRNA-phasiRNA regulatory module that amplifies plant immune responses.” (Summary by Mary Williams) Nature Comms. 10.1038/s41467-018-07516-z

Scientific communication in a post-truth society 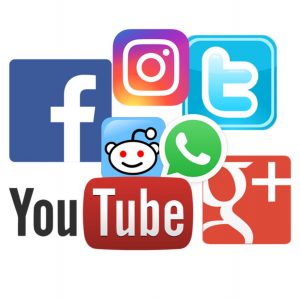 I think most scientists are occasionally exasperated when confronted with statements that clearly contradict what we know to be true, whether the topic is climate change, vaccine safety or biotechnology. Iyengar and Massey argue that the persistence of these flawed ideas is not due to a lack of positive communication, but rather “from the widespread dissemination of misleading and biased information.” They document how changing trends in how people get information (from newspapers and TV to social media) has opened the door to fake news, misinformation and disinformation, as well as increased polarization of viewpoints. They suggest that scientists and their organizations should, “anticipate campaigns of misinformation and disinformation and … proactively develop online strategies and internet platforms to counteract them when they occur.” (Summary by Mary Williams) Proc. Natl. Acad. Sci. USA 10.1073/pnas.1805868115