When trees are subjected to soil water deficits, some leaves and branches show signs of stress or die before others in the canopy. Why is that? Here I highlight recent work by Cardoso and colleagues (2019) demonstrating how the misbranded breakfast symbol of millennials – the avocado – actually teaches us how to strategically drop resources in view of survival!

There are two main mechanisms by which drought-induced leaf loss is hypothesised to occur: 1) hydraulic failure, which causes the leaf water potential to drop such that the critical water status of tissue dehydration tolerance is reached and 2) premature senescence of leaves, which involves some kind of ‘programmed’ cell death; the mechanism of which has not been fully elucidated (Munné-Bosch and Alegre, 2004), but may involve sugar sensing and signalling by reactive oxygen species and abscisic acid. Importantly, senescence is hypothesised to occur before hydraulic failure in order to facilitate nutrient reabsorption (Marchin et al., 2010). It is likely that, within a given species, the mechanism of leaf shedding may depend on the severity of the water stress (Figure 1).

In this volume of Plant Physiology, Cardoso et al. (2019) focus on the first hypothesis and test the idea that variation in the resistance to hydraulic failure between leaves can explain the heterogenous pattern of leaf death in Persea americana (avocado), when exposed to water stress. 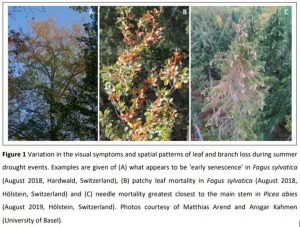 Loss of hydraulic conductance (water transport capacity) occurs when minute air bubbles are dragged into the conduit lumen where they expand under tension (negative pressure), cavitating the water column. The resulting (air) embolism blocks the passage of water through the xylem conduit. This happens because the capacity of xylem to transport water under tension is finite, and when soil water availability declines, the tension on the water column increases. Stomatal closure is the first line of defence to decrease the transpirational “pull” on the system and stabilise the water potential gradient from roots to leaves (Sperry et al., 2002). However, in a process that likely begins with increased resistance to water transport in the roots (Cuneo et al., 2016), whole plant hydraulic conductance (Kplant) declines (Rodriguez-Dominguez and Brodribb, 2019), such that Kplant may be insufficient to meet the water transport demand of even the small residual water loss that occurs from the cuticle and incompletely closed stomata. Under these circumstances, hydraulic failure can occur as the leaf enters “runaway embolism” with positive feedback between declining Kplant and declining leaf water potential (Tyree and Sperry, 1988).

Within a tree, temporal and spatial patterns of hydraulic failure may occur as a consequence of 1) variation in water demand across the crown, causing gradients in water potential and/or 2) variation in the cavitation resistance between and within plant organs.

The first mechanism requires consideration of vertical gradients in water demand associated with the optimisation of leaf properties to match the strong gradients in light (Niinemets et al., 2015). As leaf photosynthetic capacity is closely coordinated with stomatal conductance, leaves growing at the top of the canopy where there is more light will have a higher water use requirement, which could theoretically be met by a higher hydraulic conductance (Peltoniemi et al., 2012). Evidence in support of these vertical trends is mixed (e.g. Hubbard et al., 2002; Burgess et al., 2006), but the fact that water potential tends to be lower (more negative) at the tops of canopies (independent of the gravitational effects on leaf water potential) suggests that there is a tradeoff between investing in more efficient water delivery and increasing the vulnerability of xylem to cavitation (Domec et al., 2008). Vertical hydraulic supply limitations are likely to be exacerbated under drought and high vapour pressure deficits, and as such, gradients in water potential and leaf properties may be one explanation for why branches at the top of canopies and leaves at the distal ends of branches can show greater damage under soil water deficits.

The second mechanism is termed the ‘vulnerability segmentation’ hypothesis (Tyree and Ewers, 1991), and suggests that short-lived ‘cheaper’ organs like leaves should be more vulnerable to embolism, thus acting as ‘safety valves’ to break the soil-plant-atmosphere continuum and thus protect the hydraulic integrity of the stem. The ‘sacrifice’ of plant organs is considered to be adaptive, as the decline in hydraulic conductance in the stem has been associated with delayed recovery of growth on release of drought (Brodribb et al., 2010) and tree mortality (Anderegg et al., 2012). There is evidence that cavitation resistance varies between organs, but less attention has been given to the spatial and temporal patterning within a given organ; however, in support of this idea, variation in the extent of dieback between branches and leaves has been associated with the amount of embolism observed in plants experiencing water stress; ‘native’ embolism (e.g. Hochberg et al., 2017; Li et al., 2018). It is this second mechanism that Cardoso and colleagues were particularly interested in – their study, providing the first direct test of the concept.

Using an optical method to characterise leaf vulnerability, they sampled a range of leaves from well-watered plants and found that the leaf water potential at which 50% of the accumulated embolized area of the xylem (P50) had occurred ranged between -1.51 to -2.96 MPa, indicating a large range in sensitivities. Further, leaf embolism was consistently observed first in the midrib, suggesting petioles may be a major bottleneck for plant gas exchange and leaf drought tolerance. After withholding water from pots for 18 days, mean leaf water potential was -2.5 MPa. Thus, based on the range of P50 measured, an individual tree would be expected to have leaves with a percentage of embolism ranging from 0 to 100%. Indeed, the extent of native embolism observed in the petiole supported this prediction. Amongst the leaves, the area of visible leaf necrosis also varied, with on average 4% of leaves suffering no visible damage compared to 12% with 80-100% leaf area loss. Importantly, there was a strong significant relationship between the drought-induced percentage of necrotic leaf area and the percentage of embolized vessel area in the petiole (R2=0.8; P<0.001). Considering the data together, the authors suggested that embolism in the petiole leads to the decline in water potential to below critical levels required to maintain metabolic function and that the extent of damage varied due to inter-leaf variability in hydraulic resistance to cavitation.

The implications of this study are three-fold: 1) inter-leaf variability in drought resistance likely holds important ecological information on how ‘hydraulic risk’ is balanced with recoverability on release of water stress, particularly if investment in cavitation resistance comes at a carbon cost in terms of leaf construction or photosynthetic potential (hydraulic ‘efficiency vs resistance’ tradeoff); thus, 2) sampling should be sufficient to capture inter-leaf variability; and, 3) anatomical variation associated with cavitation resistance in the petiole is a clear target for continued assessment. As this study assessed 6-month-old saplings, vertical gradients in water potential were minimal. Therefore, it will be interesting to see the spatial patterning of cavitation resistance in leaves of mature trees, especially where ontogeny and vertical gradients in water demand may become important (e.g. Choat et al., 2005; Hochberg et al., 2017). Similarly, it will be interesting to know whether the variability in cavitation resistance is also reflected in other leaf properties including the turgor loss point, which is another important indicator of tissue dehydration tolerance (Bartlett et al., 2012). To date, emphasis has been placed on understanding inter-species variation in cavitation resistance, but from this study it is clear that variation between leaves of an individual tree may be just as important for understanding the strategies available to plants to withstand periods of prolonged water deficit. 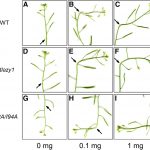 How to Make a LAZY Plant Weep
Scroll to top