By Shin-ichiro Inoue, and Toshinori Kinoshita 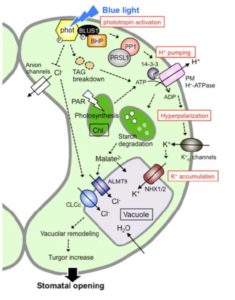 Recent investigations of guard cells with respect to blue light-induced stomatal opening have greatly advanced our understanding. In this review, we focus on the recent progress of the blue light signaling pathway in guard cells and its regulation of the PM H+-ATPase activity.

Ten simple rules to make the most out of your undergraduate research career...