MicroRNAs (miRNAs) are short (typically 21–22 nucleotide), single-stranded noncoding RNAs that regulate gene expression, mainly via posttranscriptional gene silencing. The miRNA biogenesis pathway is complex, involving numerous proteins, and is highly conserved in plants. If this pathway is hampered, miRNA accumulation is reduced or miRNA targets cannot be properly suppressed. Arabidopsis thaliana mutants in essential proteins such as DICER-LIKE1, HYPONASTIC LEAVES1 (HYL1), and HUA ENHANCER1 typically show pleiotropic defects due to the reduced suppression of numerous target genes facilitated by these miRNAs (Rogers and Chen, 2013). Protein phosphatase 4 (PP4) regulatory subunit 3 (PP4R3) promotes miRNA biogenesis by regulating the stability of HYL1 via dephosphorylation (Su et al., 2017). PP4 is a highly conserved serine/threonine protein phosphatase that plays roles in DNA damage repair and a variety of other processes in eukaryotes, although our knowledge of its composition and functions in Arabidopsis is limited.

Wang et al. (2019) sought to shed more light on PP4, including its composition and potential functions in miRNA biogenesis. The authors obtained two mutant alleles of PP4R3 in a wild-type background to confirm that miRNA accumulation is reduced in the absence of PP4R3 (see figure). The authors identified three clustered Arabidopsis genes with similarity to the N-terminal, middle, and C-terminal portions of PP4R3. A full transcript of these three genes was then identified and found to be a homolog of PP4R3, henceforth referred to as PP4R3A. Thus, these three sequences, previously annotated incorrectly as three separate genes, represent a single gene, henceforth known as PP4R3B. Unlike the generated mutant alleles of PP4R3A, mutant alleles of PP4R3B showed no mutant phenotype nor reduced miRNA accumulation. Thus, it appears that there is little redundancy in these genes, as PP4R3B cannot substitute for PP4R3A in plant development or miRNA biogenesis.

The authors then investigated the composition of the Arabidopsis PP4 complex using immunoprecipitation. Mass spectrometry of the immunoprecipitates revealed that PP4R3A associates with two catalytic subunits, PPX1 and PPX2, as well as the regulatory unit PP4R2L. The ppx1 ppx2 double mutants showed reduced miRNA accumulation, confirming that PP4 plays a role in miRNA biogenesis. The PPX genes are largely redundant, as each ppx single mutant showed no difference from wild type. Due to this redundancy, it is believed that there are two PP4 forms, one containing PPX1 and PP4R3 and the other containing PPX2 and PP4R3. 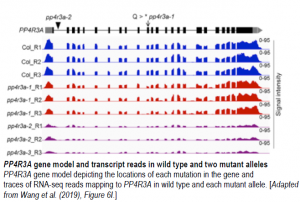 To determine where in the miRNA biogenesis pathway PP4R3A functions, the transcript levels of several pri-miRNAs were investigated and confirmed to be reduced in both alleles of pp4r3a, suggesting that PP4 promotes the transcription of miRNA genes (MIR). A chromatin immunoprecipitation (ChIP) assay revealed the enrichment of promoter regions of MIR genes, suggesting that PP4R3A associates with MIR promoters in chromatin. Since RNA polymerase II (Pol II) transcribes MIR genes, the authors conducted a ChIP assay and confirmed that PP4R3A promotes the transcription of MIR genes through the recruitment of Pol II.

These researchers succeeded in uncovering several aspects of the complexities of PP4 function in Arabidopsis. In addition to the finding that the regulatory subunit PP4R3A promotes miRNA biogenesis with one of the two catalytic subunit genes, PPX1 and PPX2, PP4R3A was also shown to recruit Pol II to MIR genes. These findings increase our understanding of how complexes in the miRNA biogenesis pathways are recruited. Due to the conservation of these pathways, it will be interesting to see if these findings will be replicated in other organisms. Additionally, it would be intriguing to see how MIR gene promoters differ from those of other genes requiring Pol II transcription, as MIR genes require a separate transcriptional machinery.

Understanding the Ontogeny of Plant Innate Immunity during Seedling Develop...

The shade of things to come: plastid retrograde signaling and shade avoidan...
Scroll to top