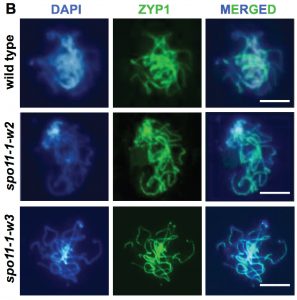 The new genetic variation is generated by recombination of the chromosome during meiotic cell divisions. The programmed double-strand breaks are initiated by DNA Topoisomerase VI-a Subunit (SPO11). As the repair of the double-strand breaks is tightly controlled, the number of breaks usually exceeds the number of crossover events. However, the mechanisms controlling recombination dynamics are largely unknown. Xue et al. studied incomplete complementation mutants of spo11 and observed that decreasing numbers of cross-overs were proportional to the double-strand breaks. Interestingly, change in cross-over distribution observed in SPO11 lines was observed primarily in pericentromeric chromosome regions. The chromatin modification patterns are likely contributing to the crossover distribution. This study provides an example of how genetic diversity can be modulated by the expression of one gene. (Summary by Magdalena Julkowska) The Plant Cell 10.1105/tpc.18.00531

Modularity of genes involved in local adaptation to climate despite physical...

The genetic architecture of colonization resistance in Brachypodium distachyon to...
Scroll to top