By Kameron Wittmeyer and Surinder Chopra 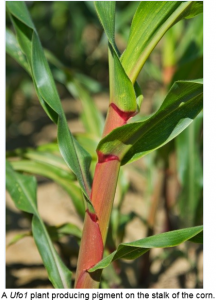 Background: A single gene can produce different outcomes depending on when, where, and at what levels it is turned on. A classical example of this is the red pigment found in corn kernels. A single gene controls the production of this pigment when it is turned on. Many different patterns of pigment have been reported, such as red kernels and white cobs, red cobs and white kernels, and red cobs and red striped kernels. All of these patterns are produced by changing when and where the single pigment gene is turned on and off. We are interested in understanding how a single gene can produce such a wide variety of patterns. We studied another gene with a mutation that turns on the pigment gene all of the time. The mutant gene, called Unstable factor for orange1 (Ufo1), also produces a variety of patterns, hence the inclusion of “Unstable” in its name

Question: What is the DNA sequence of Ufo1 and why does it produce variable patterns of pigment?

Findings: We identified the DNA sequence of the Ufo1 gene, which had been unknown for more than 50 years. In addition, we found that a transposon had moved into the Ufo1 gene. Transposons are pieces of DNA that copy themselves and move around the genome by jumping into and out of genes. The transposon is responsible for causing Ufo1 and the resulting pigments to be turned on all of the time. Finally, we found that the Ufo1 gene could be turned off or on by modifications to the transposon DNA that occur sporadically. We now understand that Ufo1 can be turned on or off at different stages of growth or in different tissues, explaining why it produces variable patterns of pigment.

Next steps: We are still interested in understanding how Ufo1 interacts with the pigment gene to turn on the production of pigments. In our study, we also found that Ufo1 turns on or off many other genes involved in responses to stress, so we are interested in identifying the underlying function of Ufo1.

The Complex Evolution of Desiccation Tolerance