Obtaining genomics and other –omics datasets is now routine and widely used across all biological systems, including plants. As a consequence, a wide range of plant species are being interrogated at the genome, epigenome, transcriptome, translatome, and proteome level, leading to new hypotheses about gene function. However, determining gene function, i.e. functional genomics, remains a bottleneck, as available methods are slow and laborious.  The one exception is Arabidopsis thaliana: a large, validated mutant stock collection is available, A. thaliana can be readily transformed via the floral dip method, and A. thaliana is amenable to inbred, diploid genetics. For other plant species, mutant collections are either not available, restricted in access, or fail to provide sufficient coverage of the genome, necessitating researchers to generate custom transgenic lines that over-express, knock-down, or knock-out individual genes. For too many species, inefficiencies and technical challenges in transformation and regeneration, not to mention consequential somaclonal variation, are barriers to functional genomics and furthering knowledge of diverse biological processes. 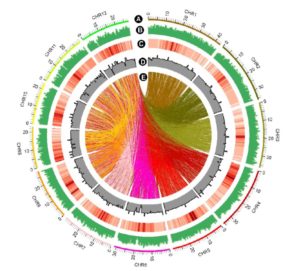 Advances in sequencing technologies, coupled with decreased costs and improved computational methods, now enable sequencing of thousands of individuals of a species. In Li et al. (2017), a collection of 1,504 fast neutron mutants of the fast-cycling rice cultivar Kitaake were individually sequenced.  This made it possible to catalogue diverse mutations, including single base substitutions, deletions, insertions, inversions, translocations, and tandem duplications. An average of 61 mutations per line was identified, and consequently in this rather small collection, the sequences of 58% of all rice genes were affected in some way.  Some mutations altered visible morphological phenotypes. Indeed, the authors observed a mutant with short-grain length and from their sequence data, readily identified a mutation in the Dwarf 1/RGA1 underlying the short-grain phenotype. While not a panacea for all functional genomics studies in rice, generation of a mutant population that has been annotated at the single base level highlights how access to inexpensive sequencing can generate a rich resource for the entire community to exploit for both forward and reverse genetic screens.

In the era of CRISPR/Cas9-mediated gene editing, one may question the value of mutant populations created using random mutagens.  At present, however, CRISPR/Cas9-mediated gene editing focuses on knocking-out one or few genes at a time.  While rapid advances in gene editing tools and methodologies have been made in plants (Čermák et al. 2017), the process is still arduous, and requires generation of a gene-specific construct, transformation and plant regeneration. Further, multiple regenerants often need to be screened to obtain the desired loss-of-function mutation. Creating gene replacements with CRISPR/Cas9 – enabling a greater range of genetic variability – is still technically challenging and typically demands a selectable or screenable phenotype to recover rare, editing events. Finally, there is an inherent user-derived bias in all gene editing approaches, due to the fact that the researcher picks the locus and the type of genetic modification to be created.  Random mutagenesis sometimes makes up for our limited understanding of biological processes; occasionally great insight is achieved by unanticipated mutations that inform biological function. Thus, while CRISPR/Cas is a powerful tool for functional genomics, its limited throughput in plants and inherent biases can be offset by a large-scale, curated mutant collection.

Rapid advances in gene editing technology – led primarily by human and mammalian researchers – suggest new approaches for functional genomics in plants. For example, libraries of guide RNAs have been generated that target thousands of genes, and when deployed in mammalian cell culture systems permit large-scale interrogation of gene function (Shalem et al. 2014). Such high throughput screens in plants will require innovative approaches to deliver the guide RNA libraries to plant cells en masse and recover collections of plants with knock-out mutations.  In addition, the recent development of CRISPR/Cas9-derived base editors (Komar et al. 2016) make it possible to envison saturating target loci with genetic variation that is more akin to that obtained using chemical mutagens such as EMS. Increased efficiencies in plant transformation and regeneration (Lowe et al. 2016), coupled with novel CRISPR/Cas9 mutagenesis strategies, provide hope that genome-scale CRISPR/Cas9-mediated mutant collections may not be too far off the horizon for plant researchers.