Corredor-Moreno et al. identify a branched-chain amino acid aminotransferase that is critical for progression of economically damaging diseases of wheat.

Background: Wheat yellow and stem rust are major diseases of wheat worldwide. Plants have a complex immune system that when activated can prevent pathogen colonization. Early during infection when pathogens are first detected, various signaling molecules let the rest of the plant know it is under attack and activate defense responses. These responses include activating the expression of various defense response-related genes. This process is called systemic acquired resistance (SAR) and relies on plant hormones like salicylic acid (SA). Many cellular processes activate SA production, including the production and degradation of amino acids. Unfortunately, pathogens also evolve and develop mechanisms that stop these signaling processes to promote their survival, leading to severe plant disease. 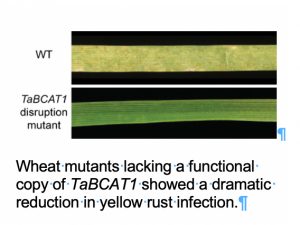 Question: We set out to identify wheat genes whose expression could be important for controlling the ability for yellow and stem rust to cause disease. We used comparative gene expression analysis between wheat cultivars that showed different levels of yellow rust infection to find these genes. We then assessed their role in the host defense response through mutant analysis.

Findings: Using the latest gene sequencing approaches, we compared expression data from resistant and susceptible wheat cultivars infected with yellow rust. Among the genes found to have altered expression, we further explored a gene we called TaBCAT1. Deleting the function of TaBCAT1 in wheat mutants severely reduced infection with yellow and stem rust. Furthermore, these mutant plants had higher levels of branched-chain amino acids (BCAAs) than normal, reflecting the likely role of TaBCAT1 as a key enzyme that acts in BCAA degradation. In addition, mutant plants had two-fold more SA than wild-type plants in the absence of infection, which led to higher levels of expression of other genes related to plant defense. These results suggest that when TaBCAT1 function is disrupted, SAR is constantly activated, likely readying defense responses against the wheat rust pathogens even before attack.

Next steps: TaBCAT1 represents a newly identified regulator of rust infection that could be disrupted by wheat breeders to provide durable resistance in wheat to two of the most economically damaging diseases worldwide. 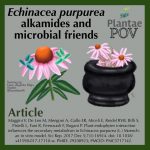 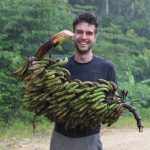