Whereas fluorescent tagging of proteins has dramatically advanced the study of protein function in cell biology, similar approaches with walls have been difficult due to the few methods available to visualize polysaccharides and monitor their dynamic modifications. What has become increasingly clear in recent years is how the physical properties of walls can direct not only cellular function but also plant growth (Bidhendi and Geitmann, 2016). Integrated approaches that visualize both glycan structures and measure wall properties in specific cell types are sorely needed.

For simplicity, walls are often divided into two major types: primary walls that are present in all cell types and are flexible to enable growth, and secondary walls that are rigid and deposited inside the primary wall in some specialized cell types. Cellulose is the structural basis of all walls, yet the gel-like matrix phase in which cellulose is embedded varies widely across the plant kingdom. It is difficult to estimate just how many different types of walls exist given every cell type could contain a distinct array of wall components. Identifying the precise components of the wall that provide its specialized mechanical properties has remained difficult to address in wall biology due to the enormous diversity of glycan structures. Similarly, ascertaining which glycans act as ligands for plasma membrane-located receptor kinases to initiate signaling pathways, crucial for cell-cell communication and cell wall integrity, is a major challenge. The phloem sieve elements are a prime example. What features give this tissue, with its relatively “simple” primary cell wall, the capacity to generate the considerable turgor pressure required for the flow of nutrients and sugars and to maintain channels of communication with associated companion cells? 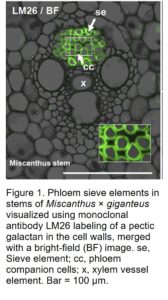 Monoclonal antibodies raised against cell wall extracts have proven the most reliable tool in wall biology to monitor differences at the cellular and tissue level. Many of these antibodies display stunning patterns that can be temporally and/or developmentally regulated (Knox, 2008). Specific glycan structures and polysaccharides recognized by these antibodies are hypothesized to impart unique physical properties for the cell to fulfill its functional roles. In a striking example of how this can occur, in this issue Torode et al. (2018) found an antibody, LM26, that specifically binds to cell walls in phloem sieve elements in Arabidopsis (Arabidopsis thaliana), Miscanthus × giganteus (Fig. 1), and sugar beet (Beta vulgaris). The authors used an elegant series of experiments to identify the specific glycan structure the antibody recognizes. Defining the precise binding epitopes of the many antibodies used by plant cell wall groups worldwide has proven highly challenging. This is largely due to the complexity and heterogeneity of the structures, the difficulty extracting “clean” polymers, and cross-reactivity. As a result, it has been a major impediment for researchers to make the link between structure and function. To identify the LM26 epitope, Torode et al. (2018) exploit a significant breakthrough in plant biology, the development of extremely pure, defined oligosaccharides via synthetic chemistry (Pfrengle, 2017; Ruprecht et al., 2017). A recently developed synthetic glycan microarray has enabled identification of the cell wall epitope of LM26 as well as characterization of many other antibodies commonly used in wall biology (Ruprecht et al., 2017).

Knowing the type of polysaccharides present in specific cell types enables the inference of what type of physical properties they will impart to the wall. LM26 recognizes a branched galactan side chain on the pectic polysaccharide Rhamnogalacturonan-I (RG-I). A highly complex polymer, differences in the glycan structures of RG-I can influence its hydration and gelling properties and, therefore, the physical properties or mechanics of the wall. Atomic force microscopy has emerged as a powerful technique to measure the mechanics of walls yet to date has largely been restricted to the readily accessible outer epidermal walls. Pioneering an atomic force microscopy-based technique to measure internal walls, Torode et al. (2018) found differences in the mechanics of phloem sieve element walls from those of the surrounding tissue. These elegant integrated approaches enable the mechanics of the wall to be related back to the unique differences in wall composition and, ultimately, phloem sieve element function. As more researchers adopt these novel techniques, we expect significant progress to be made in this highly important field and a new era for wall biology to be opened.

A Novel Role of Ring Chromosomes as Evolutionary Drivers of Herbicide Resis...
Scroll to top