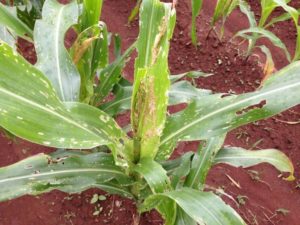 “Smallholder farmers in eastern and southern Africa are facing a new threat as a plague of intrepid fall armyworms creeps across the region, so far damaging an estimated 287,000 hectares of maize.

Since mid-2016, scientists with the International Maize and Wheat Improvement Center (CIMMYT) and national agricultural research partners have been monitoring reports of sightings of the fall armyworm in Kenya, Tanzania and Uganda. Surveys conducted in farmers’ fields last year confirmed its presence in Kenya. The threat of the pest spreading into other eastern Africa countries is a significant risk since the region has similar planting seasons.”

Quinoa—quest to feed the world

Update: Pollen Development at High Temperature: From Acclimation to Collaps...
Scroll to top