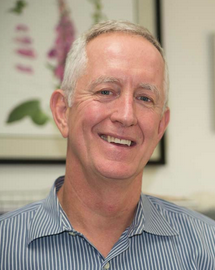 Most of us have an important person in our life who inspired us to get to where we are. Who was your role model   or the “modifier” that targeted you onto your career path?

I have been fortunate to have worked with a number of excellent scientists early in my career. As a teenager living near the ocean (Rhode Island), I wanted to be a marine biologist, but my propensity for seasickness forced me into something more terra firma.” Terry Webster, a plant morphologist at the University of Connecticut who taught my first undergraduate biology class and opened my eyes to just how complex and fascinating plants really are, led me to the study of plants. I then obtained a PhD at the DOE–Plant Research Lab (PRL) at Michigan State University with Kenneth Poff, who introduced me to blue light photobiology. For students and postdocs at the PRL in the late 1970s, these were exciting times as modern biology experimentation was unfolding and just being applied to plants. I always liked photobiology, given the precise way that the stimulus (i.e., light) could be applied, so I continued as a postdoc with Peter Quail at Wisconsin working with phytochromes at the other end of the light spectrum. Working with Peter was a great experience that taught me how to be more analytical and focused. I have had the great pleasure of running my own lab at Wisconsin ever since.

Reflecting back on your past, what interested you most when choosing a career in plant biology, and what influenced you to venture into the “expanding universe” of protein ubiquitylation?

How I got into ubiquitin as a beginning professor was largely serendipity and great advice by another plant luminary, Joe Varner at Washington University in St. Louis. I was interviewing for a job at Wash-U and was giving a seminar on what my future research directions might be. I knew I had to move away from phytochrome signaling to create my own niche and thought that protein turnover was an interesting but as yet unexplored field. Phytochrome (Phy) A provided a great model to study such degradation given that the Pr form was known to be highly stable, while the photoactivated Pfr form was rapidly degraded. Upon proposing based on the literature that light somehow “tagged” PhyA before its turnover, Joe had the remarkable insight that the newly discovered ubiquitin system might be involved. After reading the first review on the topic by the Nobel laureates Hershko and Ciechanover, I realized that this molecule was a great place to start my lab at Wisconsin, and within two years we were able to make the connection between ubiquitylation and PhyA turnover.

You had a long and successful career in research and publishing. What scientific discoveries over the past few years have radically influenced plant biology research?

This is a great question. Within so many topics my lab has worked on that involved so many talented scientists, it is hard to narrow it down to just a few, but several do stand out. Clearly connecting PhyA degradation to ubiquitin was a landmark for me as it represented the first natural target identified in any eukaryote and offered a unique entrée into the system. Another was the first 3-D structure of a phytochrome photosensory domain. After years of postulating how phytochromes perceive light, we could now look down into the electron density for the chromophore pocket and actually see the bilin, which revealed its conformation and how it might change upon light absorption. Definitely a religious moment! A third was our appreciation for just how intricate and far reaching the ubiquitin system is. First indications from yeast suggested that just a couple of ligases (E3s) were responsible for attaching once its genome sequence became available, we were startled to find almost 700 Arabidopsis genes encoding just one E3 type (F-Box proteins), making it way more complicated than we ever imagined. A fourth was the realization that ubiquitin was just the tip of the iceberg in terms of proteinaceous post-translational modifiers. My lab now works on several others, including SUMO and two modifiers involved in autophagy.

Arabidopsis has been the primary workhorse for plant biology research for the past decade or two and has contributed immensely to our current knowledge of how plants function and interact with their environment. There is now a trend to move away from Arabidopsis and similar model plants into crops for research. Is this wise?

I think plant scientists mutually agree that our ultimate goal is to develop ways to change crops to improve their yield and nutrition in a sustainable way. So an understanding of crops species is clearly needed. But I think that moving away from such a simple and tractable model as Arabidopsis or other plant models is premature. There is still way too much we do not understand about the basic physiological and developmental processes in plants to completely abandon Arabidopsis and shift to crops that are more challenging to work with and offer less foundational knowledge.

Today more than ever, there is an augmented necessity for improving crop plants, both sustainably and rapidly, to meet the rising food, fiber, and fuel demands of the exponentially growing world population.What is your take on using genetically modified (GM) crops that have the potential to fulfill our demands?

With our ever-increasing population and more emphasis on using plants as fuel, it is clear that a wide range of approaches will be needed to keep us all sufficiently fed, including controls on population growth and new ways to sustainably  increase food and fiber production. No doubt, GM crops have to be in this equation. But scientists have to keep people informed about the benefits and risks. When you think about food safety, whether a crop is sensitive or resistant to an herbicide or an insect might involve substituting one amino acid for another in a 500-amino-acid protein, or introducing another relatively benign protein among the 20,000 other proteins in the plant. The greater risk is who controls our food supply, the ecology of farmlands, and in some cases the pesticides used—not the GM food we actually consume.

Many say we are in the golden age of scientific research, mainly due to the technological advancements that changed the way we experiment. However, when it comes to public research funding and the job market, it appears that this age might be over for newly minted PhDs. What advice would you give to young scientists interesting in entering the field?

First let me say that the notion of a PhD glut in plant biology is based on the perspective that the only “good” jobs are the ones allowing you to run research labs at top-flight universities. And you are right that there were, are, and always will be only a few of these coveted positions opening each year. But there are many other ways to be engaged in science, including the all-important tasks of training the next generation of scientists, which often occurs at primarily undergraduate colleges and universities; working in biotech companies that actually bring new technologies into practice; and working on scientific policy boards that help encourage science while simultaneously protecting citizen interests. The famous luminary Anton Lang, who was the first director of the DOE–PRL, advised me as a graduate student that “there is always room for good scientists,” regardless of the ups and downs of the economy. Your job, he said, is “to learn how to be one of those scientists.”

As an employer yourself, what are the key qualities you look for in a potential candidate for a faculty or postdoc position?

As for candidates for jobs in my lab, I am looking for those who are excited about science, read the literature, can identify emerging trends, and are technically gifted. Learning how to organize a proper experiment with all the necessary controls that will eventually lead to an answer (either good or bad) is a true gift that sometimes takes years to learn. As a beginning faculty member, focus your lab around a good question that excites you and not around a good technique, and don’t be afraid to switch fields or techniques. Once you have that fascinating question, try to find the best techniques to answer it regardless of whether they are familiar to you or not. Don’t be afraid—anybody with a reasonable amount of talent can become proficient in most experimental approaches, from genetics and biochemistry to proteomics and structural biology. This strategy has kept me engaged for some 30 years as a research professor, with many interesting questions remaining.

ASPB and its science policy committee is instrumental in advocating for plant biology research on Capitol Hill. As an elected member of ASPB yourself, what advice would you give to educators and scientists across the nation to promote public interest and investment in plant sciences?

I think that we as plant scientists need to stay engaged in the public discourse about how important basic research is to our national economy and to global health. One of the main ways we are going to keep pace feeding the 9 billion people expected by 2050 is with technology developed in our research labs. Given what is now possible with respect to increasing yield and improving resistance to biotic and abiotic stress, diverting just a small fraction of what the United States spends on military defense toward agricultural research could have a profound impact.