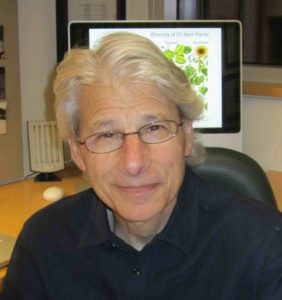 MT: Since you joined the faculty at UCLA in 1976, it’s become possible to dive into an organism and look at every gene you’re interested in. This wasn’t possible back in 1976. How has technological change over the course of your career affected how you do research?

BG: That’s an interesting question because at every stage of my career, there have been technological changes that have spurred and accelerated the course of my research and have allowed a lot of things to be investigated that weren’t possible before those technological changes came along. I think that one was being able to handle plant genes, plant DNA and RNA, on the biochemical level. The biggest change, though, in the midseventies, was the invention of genetic engineering, recombinant DNA. Prior to 1973, no one had thought about genetic engineering. In 1973, Stanley Cohen and Herb Boyer invented genetic engineering, meaning that you could stick a gene in a plasmid and allow the plasmid to have a piece of DNA that it wasn’t born with. That changed everything. I started my professorship in 1973, so the invention of genetic engineering coincided with the beginning of my career.

MT: I heard you had a long and winding path to where you are now. Was there a specific moment that turned you on to biology?

BG: I think that, like a lot of people, the “eureka moment” comes when you have an inspiring professor who turns you on to a topic and allows you to see things in a different light or helps you think about something that you hadn’t quite thought about in an exciting way before.

I think the eureka moment for me was my freshman biology class, with my wonderful undergraduate professor Norman Cohen from Ohio University. I think he was such a remarkably dynamic young professor at the time that I was turned on to genetics more than anything else—specifically, the relationship between genes and genetic processes and those kinds of things.

I think there’s probably a combination of things, but if you get into the right class with the right professor, and he or she is incisive and exciting and presents the material in provocative and fantastic ways, as Norman did— that’s what turned me toward the field of genetics.

MT: The undergraduate courses you teach have acquired something of a reputation on campus. How did this happen?

BG: Because I’m a crazy guy! I’m pretty radical on everything I do. I’ve always tried to push the buttons with my research and my teaching.

I think that I view teaching as very similar to research. You have to experiment with new tools, and you have to try new techniques. The goal is to try and teach students how to think critically and open up new horizons to them that they hadn’t seen before.

MT: What advice would you give to grad students facing their first teaching experience?

BG: I think my advice would be to find a great mentor who’s a fabulous teacher. Just grab onto that mentor and learn every single thing about teaching, by observing, talking, and doing your teaching with him or her. I don’t think there’s any substitute for that.

The most important thing graduate students can do in their discussion sections is to try to teach their students how to think and to understand the critical thinking process. Use an exciting field, use something that’s fun that the kids can grab on to. In plants, it could be genetic engineering; in animals, it could be stem cells, cancer, or obesity; or any of these things that kids could identify with. If you get something that impacts their lives on a daily basis, and then teach critical thinking, even though they don’t know they’re being taught critical thinking, then it becomes a big success because they’re motivated to understand the subject.

MT: Are the undergrads in your classes any different from how they used to be?

BG: That’s a good question. In general, no. But it’s more complicated by the society in which they live. In terms of interest, intelligence, ability, and all of the basic stuff, the answer is they’re about the same. But in terms of how worried they might be about where they’re going to be five or 10 years from now, I think that there’s a lot more angst than there was 10 or 20 years ago. I think that’s simply because they’re living in these very difficult economic times. I think that causes them to choose career paths that are a little bit more obvious than in the old days, when people were more than willing to take a chance and say, “Well, I’m going to be a philosophy professor,” or something like that. Now, they might say, “Well, I don’t know, maybe there are no jobs for philosophy professors. Maybe I’ll go into computers or medicine or something like that.”

BG: I could talk forever on that—and that’s going to really be clouded by one’s interests. I think the most exciting thing in plant biology, or biology in general, is the ability to uncover every gene in every genome of every organism on the face of this earth. I think being able to understand all the genes in the diversity of the plant kingdom will give us the raw material to understand how the diversity of form and function in plants has evolved to give us this remarkable thing called the plant kingdom. The corollary to that is that once we have all that information, we will use that information to do a lot of great things in either genetic engineering or classical breeding.  We’re going to be able to use this natural variability and diversity within the plant kingdom and harness it to make better soybeans, cotton, corn, and everything else. We’ll be able to grow a lot more on a lot less. I think when we look at agriculture 100 years from now, plants are going to look very different. I mean, they’re going to look the same, but they’re going to perform very differently, and much more spectacularly than they do now.  We’ll be harnessing all this gene information that we know from all of these genome projects that are going on. In my mind, I think that’s really one of the most exciting things that’s happening in plant biology.

MT: I have read that you’re also involved in the biotech sector. Where do you see the industry going in the next 10 years?

Plant biotech is a tough, tough question. It’s mingled with the genetic engineering issue, which unfortunately has been one of the most contentious issues of the past decade. And that has really, in my opinion, kept plant biotech in some respects from moving forward. There are a lot of genetically engineered plants on the market in the United States, namely soybean and corn. But in terms of putting new things out there, it’s been difficult because of the pushback from activists on this issue and the antiscience perception of genetic engineering. It’s hurt our field tremendously in ways that I don’t think will be understood for another decade.

MT: Who should be in charge of implementing all this biotechnology— big companies, small companies, or the government?

BG: All of the above. It takes a village, so to speak. It takes young kids like you, doing the most exciting work you possibly can. I think it takes companies to take the exciting discoveries that you’ve made, the ones that are cutting edge, and put them in the field and see—are there more seeds? I think it takes companies to innovate and come up with their own technological developments, because they think along different lines. I think it takes government institutes like the USDA to help farmers and innovate things for the public sector that maybe companies won’t do.

MT: When will crop plants reach their thermodynamic limit?

BG: Who knows whether there is a thermodynamic limit to plants? I don’t think anyone really recognizes what the potential of plants is. I don’t think we understand on a systemwide basis how everything is connected and how we can change those connections.

Think back 100 years to 1912. That was only a few years after Mendel’s laws of genetics were rediscovered. It was only a year or so after the word gene was invented. Now flash forward to 2012, and think about how we’ve invented modern agriculture and created hybrid plants. Hybridization was unknown before the 1930s. Flash forward 100 years and think about how far we’ve come. We’re sequencing whole genomes—in only 100 years.

In 100 years from now, people will look back and say, “In the early part of the 21st century, they didn’t know very much. Look how we can make these huge plants that are totally resistant to drought, and they don’t need any nitrogen, and they’re the ultimate in organic crops—they don’t need any spraying, they’re resistant to insects, they’re resistant to fungi, they’re resistant to pests, they’re making lots of nutritious seeds, and they’re doing it really well. And we don’t have to use millions and millions of acres of land because we can produce just as much yield on hundreds of thousands of acres of land. People in the sub-Sahara can grow plants in conditions that they wouldn’t have dreamed of 100 years ago. We can feed people in ways in which we never could dream.”

MT: That’s a beautiful picture of the future.

BG: That’s the picture I see. Now, if I could give up the remaining years of my life to see one week 100 years into the future—I know you’re going to find this very strange—I would probably do it. If I could make some compact with somebody to fast forward 100 years, but give up the time that I have here, I would do it because I’m so curious to see what the future holds.