Background: Protein synthesis is extensively regulated by environmental conditions. In plants, the protein kinase General Control NONDEREPRESSIBLE2 (GCN2) responds to a wide variety of stimuli by phosphorylating the -subunit of the heterotrimeric eukaryotic initiation factor eIF2. This event is accompanied by the global repression of mRNA ribosome loading, i.e. translation. The GCN2-eIF2 signaling paradigm is highly conserved and, in animals, forms part of a stress regulatory program termed the integrated stress response. However, in plants, the details of the upstream activation components and downstream effects under stress are poorly understood.

Question: How do plants use the highly conserved GCN2-eIF2 module to regulate protein synthesis under stress conditions?

Findings: We discovered that in Arabidopsis seedlings, the GCN2-eIF2 module is under the command of reactive oxygen species (ROS). We provide multiple lines of evidence that the ROS that activate cytosolic GCN2 kinase originate from the chloroplast. Excess light or exposure to herbicides, conditions that affect photosynthetic electron transport, trigger the accumulation of ROS. By an unknown mechanism, ROS that emanate primarily from the chloroplast activate the cytosolic GCN2-eIF2 module for adjustments to protein synthesis in response to stress input. Accordingly, loss-of-function mutants of GCN2 are more sensitive to conditions that stimulate chloroplast-ROS stress than the wild type. These mutants also exhibit changes in both mRNA and protein synthesis distinct from the wild type. These data provide evidence for a potential signaling network that regulates protein synthesis under abiotic stress. The functions of ROS originating from chloroplasts have mostly been linked to transcription (chloroplast-nucleus retrograde signaling). However, translational control at the level of protein synthesis provides a much faster regulatory switch (retrograde control of translation).

Next steps: We recently demonstrated that this overarching theme (chloroplast-ROS mediated translational control via the GCN2-eIF2 module) is conserved in plants under salt and cold stress (Lokdarshi et al., 2019, doi: https://doi.org/10.1101/849257). Future work will be directed towards understanding the biochemical mechanisms of GCN2 activation by chloroplast ROS

Opinion: We aren’t good at picking candidate genes, and it’s slowing us... 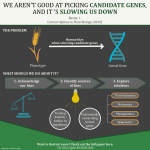