Brief bio: My scientific career really began with my favorite biochemistry course in undergrad at Queen’s University in Canada – comparing metabolism between different organisms.  I did my PhD with that same course professor who inspired me, William Plaxton, studying the regulation of plant metabolism. Afterwards, I pursued post-doctoral research opportunities with leading plant metabolism researchers at The University of Oxford researching cyanide metabolism with Lee Sweetlove and then apoplastic metabolism during bacterial infection with Gail Preston. Next, during a brief post-doc at The Australian National University with Owen Atkin, was where this research really began by looking for variation in respiration rates in Arabidopsis.  In 2015, I began an independent research fellowship in the Plant Energy Biology Centre of Excellence at the University of Western Australia, pursuing mechanisms which explain respiratory variation in plants.  When I am not doing science, you will find me exploring and enjoying the great outdoors.

PAG 2020 discussion on the next Decadal Vision 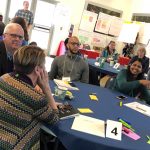 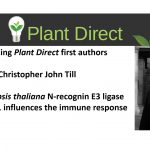