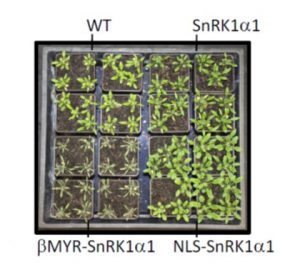 When I’m using my laptop without it being plugged in, at some point it enters battery saving mode as it senses that the battery charge is getting low. Organisms also sense their low energy reserves and activate alternate metabolic processes to ensure survival. The core energy sensor is a hetero-trimeric complex conserved in eukaryotes (yeast, animals, plants). Ramon et al. investigated the regulation of this sensor, which in plants is called SnRK1. In animals and fungi, the energy-conserving pathways are off until activated. By contrast, the authors found that in plants energy-saving pathways are ON, unless repressed. This different strategy was correlated with key differences the structure and regulatory control of the catalytic α-subunit, including default activation and regulated nuclear translocation. Altering SnRK1 activity affected downstream gene activation as well as the plant’s growth pattern. (Summary by Mary Williams)   Plant Cell 10.1105/tpc.18.00500 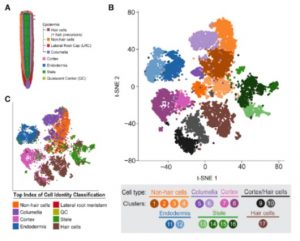 Drop-Seq is an exciting high-throughput technology for single cell transcriptomics. Using microfluidics, single cells are encapsulated in drops with beads carrying “bar-coded” primers. The RNA from each individual cell is labeled with a unique primer code, then sequenced. Now, Shulse et al. have adapted this method for use with plant cells (requiring an additional protoplasting step), and demonstrated its effectiveness by generating a transcriptomic dataset from more than 12,000 cells. The authors explore the effect of added sucrose on transcriptional profiles, and track the changes in gene expression in endodermal cells through development, demonstrating the broad applicability of this method. (Summary by Mary Williams)  Cell Rep. 10.1016/j.celrep.2019.04.054 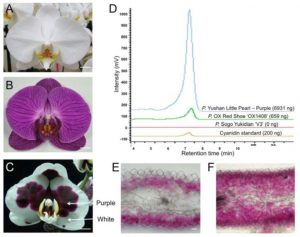 Phalaenopsis orchids produce beautiful, long-lived flowers and are widely popular houseplants. In 1996, a new variety was identified with intensely dark, nearly black pigmentation. Hsu et al. have identified the molecular basis for this phenotype; a Gypsy-like retrotransposon inserted in the promoter of a gene encoding a MYB transcription factor. Insertion of HORT1 (Harlequin Orchid RetroTransposon1) leads to a highly variable pigmentation pattern as well as high levels of anthocyanin production throughout the petal’s central cell layers, giving the petals a black appearance. (Summary by Mary Williams)  Plant Physiol. 10.1104/pp.19.00205 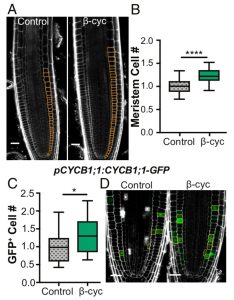 Root growth and branching have essential roles in nutrient and water uptake, and are common targets in crop improvement. Dickinson et al. looked for novel apocarotenoids involved in root development and found that dihydroactinidiolide (DHAD) and β-cyclocitral increase lateral root (LR) branching in Arabidopsis. Further characterization of β-cyclocitral revealed that this compound promotes cell division in LR primordia. The number of meristematic cells increased by more than 20% after β-cyclocitral treatment. Interestingly, the regulation of meristem division does not involve the major pathways previously described as regulators of this process (auxins, ROS, brassinosteroids). The maximum effect of β-cyclocitral in roots was detected at 750 nM, a similar concentration for abscisic acid (ABA) and strigolactones, other apocarotenoid phytohormones affecting root growth. In addition to the promotion of primary and LR growth, β-cyclocitral is able to modify root architecture, generating a deeper and more compact root system; this effect was also observed in tomato and rice. The use of β-cyclocitral treatment could be a valuable tool to improve crop performance in environmental stresses, as demonstrated in this study using salt stress. (Summary by Humberto Herrera-Ubaldo) Proc. Natl. Acad. Sci. USA 10.1073/pnas.1821445116 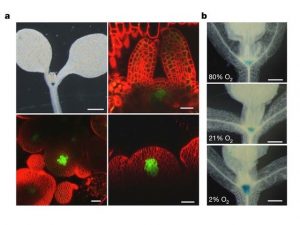 Little is known about the stimuli that regulate time intervals for new leaves production (plastochrone) at the shoot apical meristem (SAM). Oxygen is a diffusible molecule with potential to regulate this process. The use of a micro-scale Clark-type oxygen electrode allowed Weits et al. to measure oxygen at the SAM. A low oxygen niche was found around the stem-cells and hyperoxic (80% O2) conditions reduced SAM activity as shown by using a hypoxia responsive promoter. Weits and co-workers also searched for SAM related proteins that were a target of the oxygen branch of the N-degron pathway, and LITTLE ZIPPER2 (ZPR2) was identified. ZPR2-GUS reporter lines showed that hypoxia indeed inhibited the proteolysis by the N-degron pathway, and ZPR2 mutants showed a decreased leaf production compared to the wild type. ZPR members are known to be negative regulators of HD-ZIP III transcription factors and further experiments showed that ZPR2 repressed the activity and interacted with REVOLUTA (REV), PHABULOSA (PHB) and HOMEOBOX GENE 8 (ATHB8). (Summary by Cecilia Vasquez-Robinet)  Nature 10.1038/s41586-019-1203-6 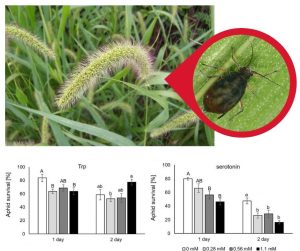 Using “Scientists Who Selfie” to disrupt stereotypes of scientists 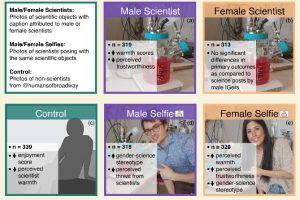 Public engagement has been a long-term challenge for scientists. The rise of social media has generated a novel avenue for connecting with a wider audience; however, many scientists walk a fine line between being personal and professional, often posting images of their work but not themselves. A recent study from Jarreau et al. aimed to determine the impact of scientists posting self‑portraits (selfies) on public perception of scientists. To test this, groups of participants were shown either selfies from non-scientists, scientific images posted by male or female scientists, or selfies of male or female scientists working in the lab. After viewing the images, participants were asked a series of questions about how they perceived the warmth and competence of scientists, and how much they trusted them. Participants who viewed selfies from scientists felt more warmth and trust towards scientist on Instagram than those that saw only scientific images. Furthermore, their perception of the competence of scientists was unchanged from individuals who saw either non-scientific selfies or scientific images. Taken together, these results indicate that making a stronger human connection through posting selfies may increase public support and trust of scientists without appearing less professional. (Summary by Nick Segerson). PLOS One 10.1371/journal.pone.0216625 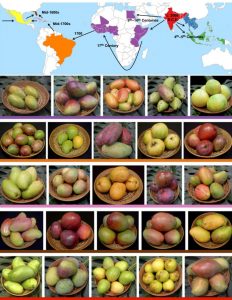 same timeline as that of walnut, peach, sweet orange, lychee, citron, sweet orange, lemon, and jujube. Throughout the process of domestication, most crops undergo severe bottlenecks which decrease genetic diversity. The effects of these bottlenecks have not been extensively studied in perennial species. This work by Warschefsky et al. explores patterns of genetic diversity in mango and adds to the body of knowledge about perennial evolution. SNP markers from double digested restriction site associated DNA sequencing were used to explore geographical patterns of diversity in 158 mango accessions from seven geographical regions. Two distinct gene pools of cultivated mango were identified as germplasm originating from Indiana and Southeast Asia. Interestingly, no significant bottlenecks were found to be associated with the introduction of mango into new regions, suggesting a complex history of domestication. In fact, many measures of genetic diversity were slightly elevated in places where the mango has been introduced including Africa, South America, the Caribbean, and Mexico. This publication was shared to our Plantae Facebook page on May 13, 2019 and quickly went viral. As of this week, the link to this paper has over 372,000 views and 2,412 shares on Facebook. (Summary by Katie Rogers). New Phytol. doi: 10.1111/nph.15731 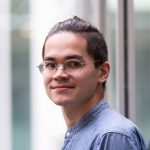 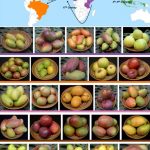