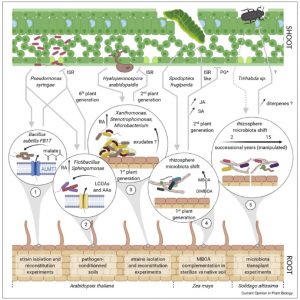 Roots and shoots exist in different environments and have different functions, but each depends on the actions of the other. In recent years, many factors have been identified that move from root to shoot or vice versa to integrate their actions; these include hormones, small RNAs, peptides, and transcription factors. This fascinating review article takes things one step further, by considering how the microbes that interact with the root communicate and integrate with the shoot, and vice versa. As an example, when leaves are attacked by pathogens or insect herbivores, the composition of root exudates changes, leading to a change in root microbiota which can enhance nutrient uptake or defense. Similarly, experimental alterations of the root microbiome has been demonstrated to enhance above-ground stress responses. The authors propose that there is a circuit through which shoot-stress perception sculpts the root microbiome, bolstering above-ground stress responses. The authors compare these findings to the contributions of animal gut microbiota to host immunity and even brain activity. (Summary by Mary Williams @PlantTeaching) Curr. Opin. Plant Biol. 10.1016/j.pbi.2021.102028 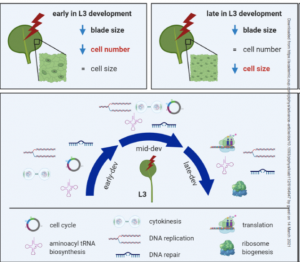 The effects of light on plant growth are incredibly complex and depend on where it is perceived, light quantity, light quality (wavelength), and when within the circadian cycle it is perceived. Romanowski et al. examined the effect of late-day far-red light perception in Arabidopsis leaves. This treatment is known to induce shade-avoidance syndrome, which is characterized by increased elongation and decreased leaf expansion, growth patterns that help the plant to rise above its competitors. The authors noted that much of the effect of end-of-day far-red (EoD FR) treatment was mediated by inhibiting the cell-division (early in leaf development) and -expansion (later in leaf development) promoting activities of phytochrome B (phyB); in fact, the light treatment was largely phenocopied by mutation of phyB.  A timed transcriptomic analysis following EoD FR treatment showed widespread suppression of biological processes including most hormone pathways, cell cycle, DNA replication, and translation. An online application to explore this large dataset is provided. Plant Physiol. 10.1093/plphys/kiab112 (Summary by Mary Williams @PlantTeaching) 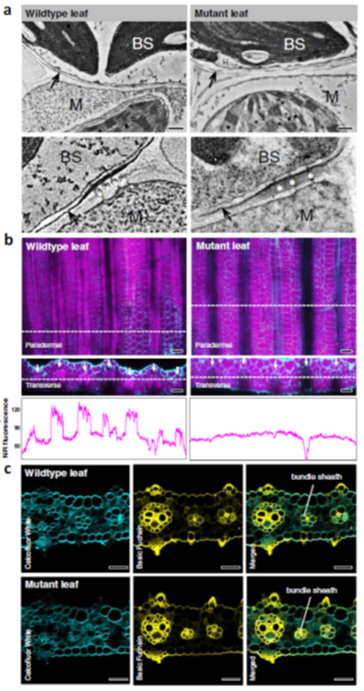 An efficient C4 photosynthetic pathway relies on the coordination between the biochemical carbon concentration mechanism that secures high rates of C4 acid flow into the bundle sheath (BS) and anatomical modifications that minimize CO2 leakage out of the BS cells. Suberin deposition in BS cell walls has been believed to seal BS cells against leakiness of CO2 in NADP-ME C4 grasses; however, direct evidence proving suberin’s role was lacking. Through screening of the N-nitroso-N-methylurea induced Setaria viridis (a C4 NADP-ME) mutants for impaired photosynthesis, Danila et al. isolated a mutant with an SNP in the coding region of an ABCG transporter gene (Sevir.9G451500) that was expressed exclusively in the developing leaf section of the C4 NADP-ME species – maize and Setaria, but not the C3 species rice. Cell wall imaging confirmed deposition defect and GC/MS analysis detected a 50% reduction of aliphatic suberin component in the bundle sheath cells of the mutants providing direct evidence in the role of Sevir.9G451500 in suberin synthesis. The mutants exhibited a higher BS conductance to CO2 due to suberin defect, grew poorly in ambient CO2, and showed reduced biomass production, CO2 assimilation rate, and stomatal conductance in high CO2. With elaborate physiological evaluation, Danila et al. linked the leaky BS to the cell wall suberin defect and verified that bundle sheath suberin lamella is an essential ingredient to assemble an efficient C4 pathway in NADP-ME C4 grasses. (Summary by Roxana Khoshravesh @RoxiKh) Comms. Biol. 10.1038/s42003-021-01772-4 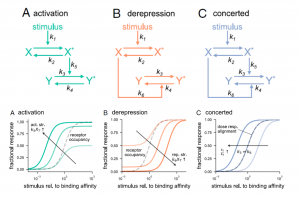 Genetic studies have provided us with countless examples of regulatory switches that transduce a signal into a response. Mutant analysis is usually sufficient to identify these controlling elements, but often in an all-or-nothing way. Here, Ghusinga et al. have taken a theoretical kinetic approach to examine how three types of switch architectures affect the properties of the signaling pathway, using a two-tier model. The first tier is the activation of a receptor by a stimulus, denoted as X -> X*. The second tier is the toggling of the switch between inactive (Y) and active (Y*) state, determined by the kinetics of activation and de-activation. In the activation model, the rate of switch activation is correlated with X*; in other words, active receptor turns the switch on. In the derepression model, the rate of switch deactivation is correlated with X; in other words, inactive receptor turns the switch off. The third model, the concerted model, combines activation and derepression. The authors then examine the sensitivity of each switch type to stimulus amount (e.g., receptor occupancy; dose-response curves), how quickly the response changes with increasing stimulus, and sensitivity to fluctuations. The authors describe the consequences and situational values of each type of switch (as an example, the activation model is sensitive and fast but can lead to false positives, making it a good fit for the flight-or-fight adrenaline response). By contrast, slower derepression signaling is more common in resource-limited plants. This analysis will contribute the development of quantitative models of plants. (Summary by Mary Williams @PlantTeaching) Proc. Natl. Acad. Sci. USA 10.1073/pnas.2013401118 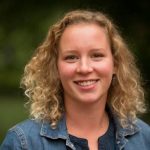 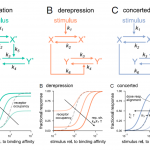