Review: A series of fortunate events: Introducing Chlamydomonas as a reference organism 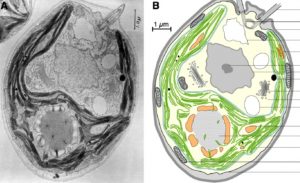 Clamydomonas reinhardtii is the most thoroughly characterized unicellular alga. Like yeast, it is a single-celled eukaryotic organism that is easy to culture, and it lives predominantly in its haploid form but is readily mated for genetic studies. Additionally, it is light-responsive,  photosynthetic, and a facultative photoautotroph (meaning that it can be grown in the absence of photosynthesis if provided with a carbon source). For these reasons, it is a good genetic system for studies of photosynthesis, but it is also a motile cell with distinctive and well-studied cilia (previously called flagella) that resemble animal cilia. In this comprehensive review, Salomé and Merchant describe the history of Chlamydomonas as a reference organism, key research topics, and new tools and directions. With increasing interest in microalgae for biotechnological applications, insights from this reference organism will prove invaluable. (Summary by Mary Williams) Plant Cell 10.1105/tpc.18.00952 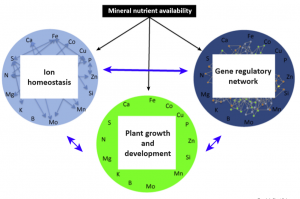 Plants require at least 14 mineral nutrients to complete their life cycle. These mineral nutrients are unevenly distributed within the soil, and plants have evolved physiological adaptations (changes in root growth, exudation, symbiotic relationships with soil organisms, etc.). to address these nutrient limitations. In this review, Bouain and colleagues discuss the growing evidence supporting overlapping regulation of homeostasis for several essential minerals. The research within this review highlights several important interactions that have drawn recent intrigue: the interplay between P, Fe, and Zn their effects on root growth; the reciprocal regulation of P and N transporters under varying P and N levels; and the enhancement of Zn uptake in the presence of N. The authors highlight the need for more research in combinatorial nutrient stresses to further reveal their distinct genetic architecture, and their effects on root system architecture and soil biotic interactions. (Summary by Nathan Scinto-Madonich)  Trends Plant Sci. 10.1016/j.tplants.2019.03.008. 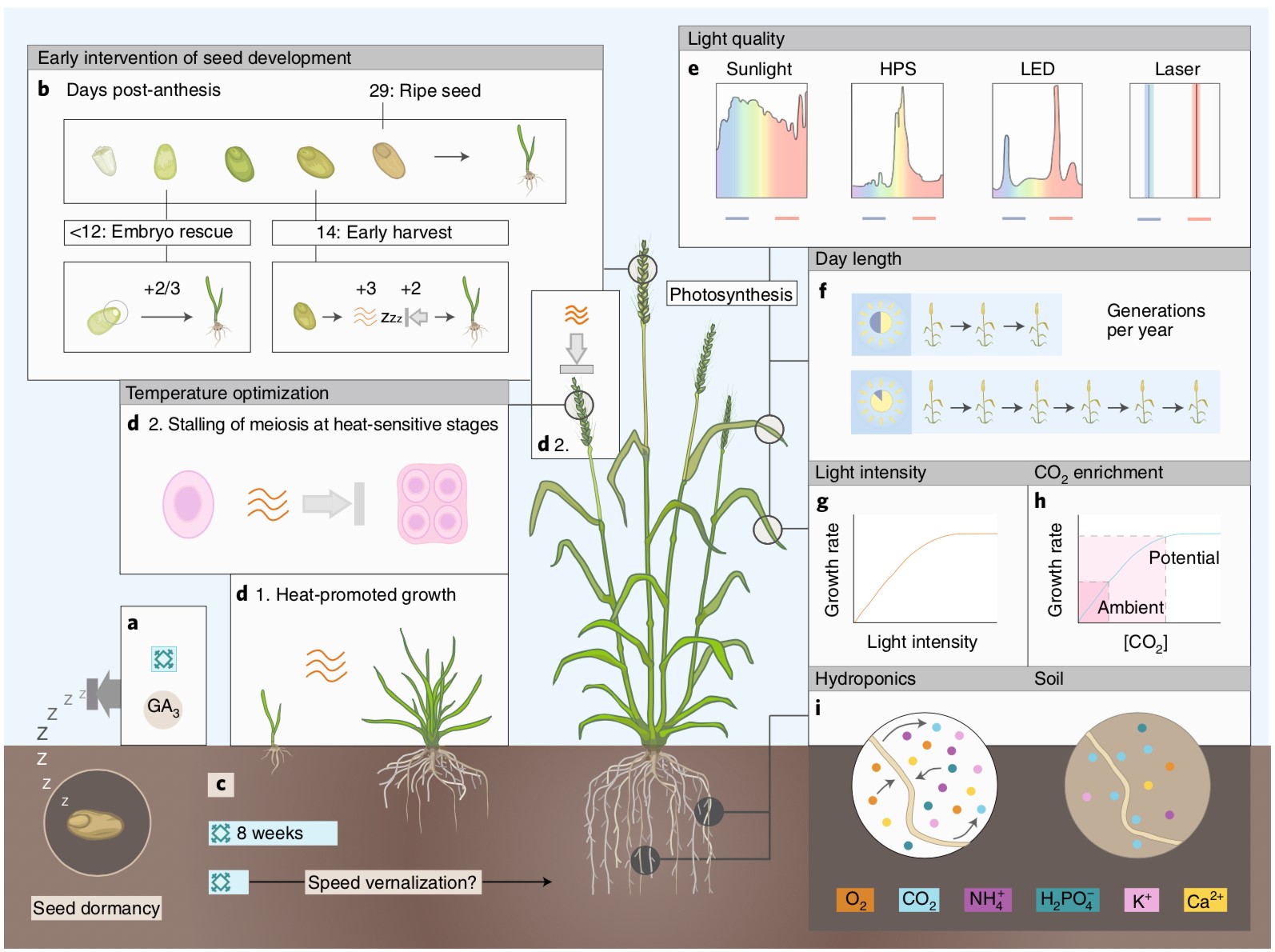 The world demands food, plant scientists and breeders have the challenge of feeding a growing population. In a recent review Hickey et al. summarize the state-of-the-art technologies used for crop improvement. In use since 2003, ‘speed breeding’ is a set of improved methods for fast-tracking plant life cycle, using optimal light quality, light intensity, day length, and temperature to accelerate photosynthesis and flowering. Now, so-called ’speed breeding 2.0’ technologies can further increase this speed, with the acceleration of seed germination, early harvesting, and shortening the transition to flowering. Scientists are also working in improving phenotyping, which is the basis for selecting lines and central activity in plant breeding. Breeders can now ’see’ the plants with computer vision and measure more features; machine learning approaches allow them to process and analyze information in an unprecedented manner. Recent gene editing technologies can be directly integrated into the speed breeding system (i.e. ExpressEdit), avoiding in vitro manipulation of plants. Novel technologies allow the delivery of preassembled Cas9–sgRNA ribonucleoproteins into meristems tissues to generate gene edits without the use of exogenous DNA. The use of wild species is an alternative to generate modern cultivars. Current genome editing technologies can be applied to target domestication-related genes in wild species and allow accelerated domestication. The combination of all these technologies is helping plant scientists to face the challenge of feeding 10 billion. (Summary by Humberto Herrera-Ubaldo) Nature Biotech. 10.1038/s41587-019-0152-9 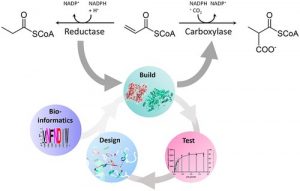 One of the things I like most about synthetic biology is the “why not” attitude. This article by Bernhardsgrütter et al. is intriguing because rather than taking the standard “let’s fix Rubisco approach,” the authors started with a non-CO2 fixing enzyme and engineered it towards having carboxylase activity. Why not? The authors used the Design-Build-Test cycle to alter the active site of two bacterial reductases. They started by searching the superfamily of medium-chain dehydrogenases/reductases (MDR) for a previously-identified CO2-binding motif, and then tested (in vitro and using Molecular Dynamics simulations) and optimized the catalytic site to “awaken” the carboxylation activity. They conclude, “This opens the possibility for the future engineering of novel CO2-fixing enzymes that could find application in biocatalysis and synthetic biology.” (Summary by Mary Williams) J. Am. Chem. Soc. 10.1021/jacs.9b03431

A bacterium that demethylates opiate thebaine for a green chemistry solution ($) 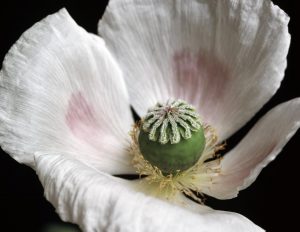 Opium poppies produce opiates including morphine and thebaine. Derivatives of these compounds can also have diverse beneficial properties. One of these, naloxone, is a competitive opioid receptor antagonist that can be administered to counteract the effects of opioid overdose. Because of the rise in opioid abuse and addiction (130 Americans die every day from an opioid overdose), naloxone has become widely available and is credited with saving countless lives. In an effort to improve its production, Augustin et al. identified a bacterium from an opium poppy processing waste-stream that is able to use thebaine as a sole carbon source. From this bacterium, they isolated an enzyme, morphinan N-demethylase (MND) that is able to efficiently N-demethylate morphine, thebaine and codeine, for production of naloxone. This study provides a greener and cheaper route to the production of opioid antagonists. (Summary by Mary Williams) Nature Sustainability 10.1038/s41893-019-0302-6

Methyl jasmonate-induced changes of flavor profiles during the processing of green, oolong, and black tea 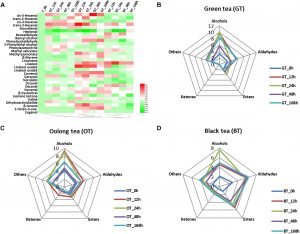 Tea quality depends on the product’s taste and aroma, which are provided by phenolic and volatile compounds respectively.  Here, Shi et al. analyzed changes of volatile and amino acid (AA) profiles in fresh tea leaves (Camellia sinensis L.) and during the processing of three tea products (green, oolong and black) after after preharvest methyl jasmonate (MeJa) treatment. By a descriptive sensory evaluation, all treated teas showed a slightly increased flowery aroma that is associated with good quality. Volatile analysis by Gas Chromatography-Mass Spectrometry (GC-MS) showed an increase in 2-phenylethyl alcohol and benzyl alcohol which are related to the flowery aroma. Amino acid changes depended on the type of processing, with a decrease in aromatic AA during tea processing which correlates with a direct conversion of tryptophan- and phenylalanine-derived volatile compounds. The authors concluded that MeJa treatment induces changes in volatiles and amino acids levels by affecting the lipoxygenase,  terpenoid and the shikimate pathways. (Summary by Ana Valladares) Front. Plant Sci. 10.3389/fpls.2019.00781 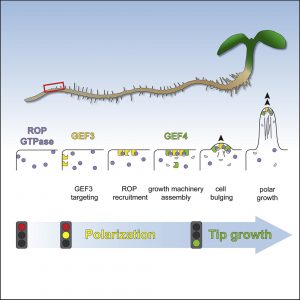 Root hairs vastly increase the surface area of the root in contact with the soil substrate, and are crucial for efficient water and nutrient uptake. They are also an excellent system for studies of polar growth or tip growth in cells, a process that involves the cytoskeleton, defined membrane domains, and vesicle trafficking. Rho-type GTPases of plants (ROPs) are known to contribute to membrane fusion at the growing tip. RopGEFs are guanine nucleotide exchange factors that are needed for ROP activity. Denninger et al. showed that two RopGEFs are required for distinct stages of root hair outgrowth. GEF3 specifies the root-hair initiation domain, and GEF4 promotes outgrowth once this site has been specified. Interestingly, although plant and animal/fungal GEFs share function, they have no conserved features, indicating that “the problem of robust cell morphogenesis has been solved several times during evolution to account for specific differences in cellular growth mechanisms, organ development, and lifestyle.”  (Summary by Mary Williams) Curr. Biol. 10.1016/j.cub.2019.04.059 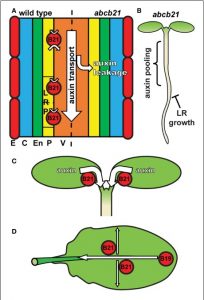 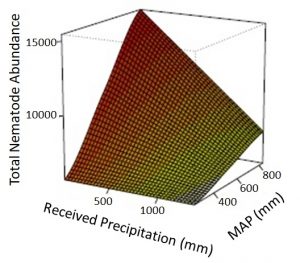 Climate change is expected to cause numerous negative impacts on plant populations. An under considered area that will be affected are the communities of soil organisms that rely on a delicate balance of environmental conditions, particularly in grasslands that receive moderate precipitation (mesic grasslands). A recent study from Franco et al. aims to address how the mean annual precipitation (MAP) affects soil organism populations. To address this, the authors provided fields of arid, semiarid, and mesic grasslands with either more or less water over two years. Following these treatments, the soil organism composition was surveyed to determine which species were prevalent under each condition. The authors found that both major increases and decreases in MAP caused changes in the biodiversity of soil organisms. Furthermore, they found that, under drought conditions, populations of root-feeding nematodes were more abundant. This change was due to a decrease in the population of nematode predators in drought conditions, particularly in mesic grasslands. This research has major implications for the effects of climate change and indicates an additional challenge that climate change presents. (Summary by Nick Segerson) Proc. Natl. Acad. Sci. USA 10.1073/pnas.1900572116 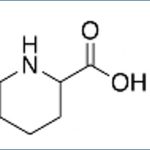