Review: Orphan crops and their wild relatives in the genomic era 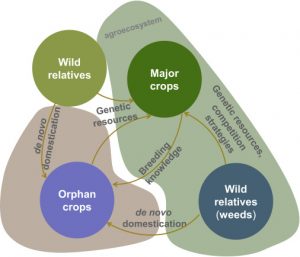 More than half of human calories come from rice, wheat, and corn, although many other cereals have been domesticated as food crops. Several of these “orphan” cereal crops and their wild relatives are being studied with the goal of diversifying our food supply, which is particularly important due to climate change. Ye and Fan review these efforts, using a few examples including several types of millet, oat, rye, wheatgrass, and wildrice species. The authors describe where the orphan crops were domesticated and are currently grown, and their beneficial traits such as better nutrient profiles and abiotic resiliency. Genomic studies of the orphans and their wild relatives are providing markers for breeding and identifying functional genes. Efforts to improve these crops through speed breeding, de novo domestication and gene editing are discussed, as are how insights from the orphan crops can be leveraged to improve major crops. (Summary by Mary Williams @PlantTeaching) Mol. Plant 10.1016/j.molp.2020.12.013 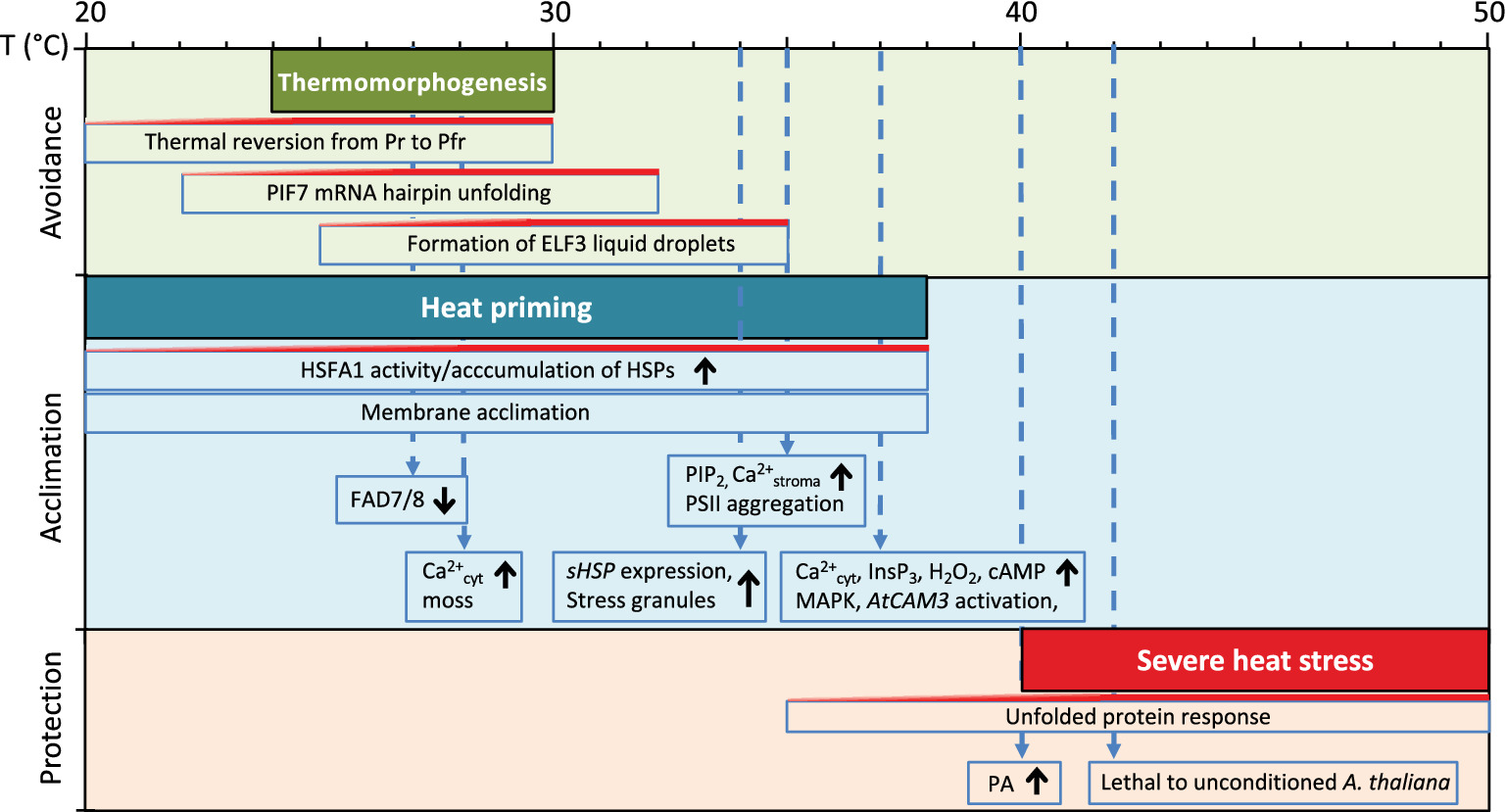 Climate change has increased global temperatures and affected agriculture in recent years. Heat stress can negatively impact plant growth, development, metabolism, fertility, and immunity. To generate resilient plants that will endure warmer weather conditions, it is imperative to understand how plants perceive and cope with heat stresses. In this review, Hayes et al. report what is known about these processes. The first response to heat, when temperatures are above optimum but still within the physiological range (24-30℃), leads to morphology and development changes known as “thermogenesis”. Heat can inactivate photoreceptors such as phytochromes, which act as thermosensors, in a process called “thermal reversion”, A transcriptional repressor in the evening complex, EARLY FLOWERING 3 (ELF3), forms droplets within the nucleus that accelerates growth. These liquid bimolecular condensates are compartments with no membrane that contain regulatory proteins, however, how they act as heat sensors is still unknown. Warmer temperatures can also affect the RNA hairpin structure of a key transcription factor involved in hypocotyl and petiole elongation, PIF7, enhancing translation. The developmental changes triggered by these factors help plants to avoid heat damage. When temperatures are above 35 ℃, the cell accumulates heat shock proteins (HSP) that are molecular chaperones that aid proper protein folding and avoid aggregation. Also, the cellular membrane becomes more fluid with heat. Calcium and peroxide levels can rise quickly in response to heat stress, promoting cellular protective responses. Finally, when temperatures reach above 40 ℃, severe heat stress affects protein function, leading to cell death. Having several different molecular thermosensors is likely to help plants acclimate to and survive heat stress. (Summary by Camila Ribeiro @camicribeiro86) Plant Cell Environ. 10.1111/pce.13979 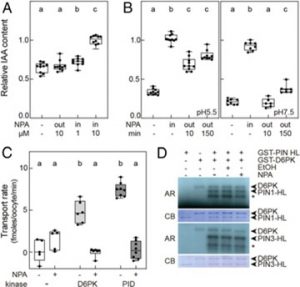 N-1-naphthylphthalamic acid (NPA) inhibits polar auxin transport (PAT). Though used for over six decades, the precise mechanism by which it inhibits PAT is still unclear. A new study by Abas and colleagues now suggests that NPA directly associates with and inhibits the activity of PIN-FORMED (PIN) transporters. The authors used oocytes from Xenopus laevis as a heterologous system to express PIN transporters, which allows direct injection of drugs into the cells. Using this system, low concentrations of NPA were showed to specifically inhibit efflux of radiolabelled indole-3-acetic acid (3H-IAA) through active canonical and non-canonical PIN proteins. To probe the possible mechanism of NPA-PIN interaction, the authors performed a microscale binding assay that suggested direct, high-affinity binding of NPA with membrane fractions enriched with PIN proteins, independent of phosphorylation status and interference from other proteins. Further, examining effects of NPA on interaction between the PINs, it was found to interfere with dimerization of PIN proteins. Together, these results provide the first mechanistic details into direct inhibition of PIN proteins by NPA. (Summary by Pavithran Narayanan @pavi_narayanan) Proc. Natl. Acad. Sci. USA 10.1073/pnas.2020857118

Systematic characterization of gene function in a photosynthetic organism

Vilarrasa-Blasi and coworkers described their impressive work on a huge barcoded Chlamydomonas collection, in which they screened almost 60,000 insertion mutants grown under a wide range of environmental and chemical stress conditions. The authors assessed genotype-phenotype specificity for almost 80% of C. reinhardtii genes, represented by one or multiple allelic variants, and shed new light into the function of uncharacterized genetic determinants, including conserved genes involved in photosynthesis and novel factors underpinning CO2-concentrating mechanism. The identification of mutants showing sensitivity to Latrunculin B (LatB), a defensive molecule that interferes with actin polymerization, represents a clear example of this powerful approach. In C. reinhardtii, F-actin homeostasis pathway relies on the activation of NOVEL ACTIN-LIKE PROTEIN1 (NAP1), which is resistant to LatB, mediated by LatB-SENSITIVE (LAT1-LAT3) factors. In this study, the authors identified three novel components (LAT5-7) and demonstrated the conservation of the pathway underlying cytoskeleton integrity in the model plant Arabidopsis thaliana. High-throughput data generated in green algae provide important tools that will pave the way for functional genomics in land plant species, especially for the characterization of unknown genes involved in essential processes and adaptation to different environments. (Summary and image adaptation by Michela Osnato @michela_osnato) bioRxiv 10.1101/2020.12.11.420950 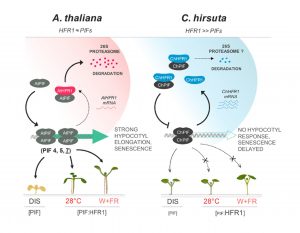 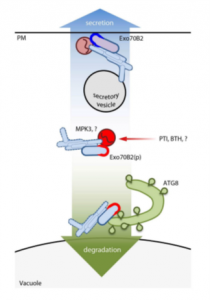 The exocyst is a conserved protein complex that mediates tethering of secretory vesicle to the plasma membrane prior to SNARE-mediated membrane fusion. Exo70 is one of eight subunits and has expanded into 23 homologs in Arabidopsis. Brillada and Teh et al. identified Exo70B2 as a bona fide exocyst subunit that localize to the plasma membrane and is recruited to the secretory vesicle after being released from the trans-Golgi network. Exo70B2 is transported into the vacuole after treatment with benzothiadiazole (BTH, an analogue of salicylic acid), Concanamycin A and peptide flg22. Transport of Exo70B2 into the vacuole is mediated by autophagy, based on colocalization with autophagosome markers, and confirmed by the absence of Exo70B2 in the vacuole in atg2 mutant. Exo70B2 interacts with and is phosphorylated by MPK3. Phosphorylation mimicking variants of Exo70B2 inhibit localization at sites of active secretion and increase interaction with ATG8 (AUTOPHAGY-RELATED PROTEIN 8), promoting its turnover. Overall, this study sheds light on Exo70B2 functions as a secretion regulator to maintain cellular homeostasis and shows that phosphorylation of this exocyst subunit promotes its degradation, dampening secretory activity. (Summary by Min May Wong @wongminmay) Plant Cell 10.1093/plcell/koaa022/6017825 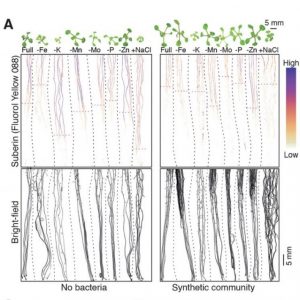 Roots have been described as the gut of the plant, as they are the main interface for nutrient and water intake from their surrounding environment. This interface is remarkably complex. Not only must the root allow for the proper diffusion of substances into the plant, but by virtue of being constantly exposed to an entire microbiome, it must also act as a “control point” for plant immunity. Are these processes — nutrient intake/diffusion and microbiome maintenance — integrated together, and if so, how? Salas-González et al. piece together an intricate story that supports a relationship between root diffusion function and microbiome maintenance. Mutations in genes that regulate physiological root diffusion traits resulted in plants with altered microbiomes; likewise, variation in microbiomes resulted in alterations of root diffusion traits, focused primarily on suberization phenotypes. In one experiment, wild-type plants were grown either under sterile conditions or with microbiome inoculation, then subjected to nutritional stress; inoculated plants demonstrated suberization and subsequent ionome phenotypes that indicate microbiome presence as important factors for acclimation to nutrient stress, accomplished through modulation of suberin deposition. The authors cap this work with transcriptome and genetic analyses that suggest this suberization modulation is accomplished by the microbiome repressing abscisic acid response. This work elucidates a fundamental relationship between plants and their microbiomes that will allow us to better understand plants’ abilities to adapt in various environmental conditions. (Summary by Benjamin Jin) Science 10.1126/science.abd0695 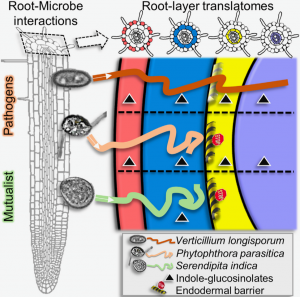 Plant roots are composed of concentric cell layers with distinct gene regulatory programs. Cell layer-specific responses are likely critical for plants to cope with microbes with various lifestyles, but little is known about root responses against microbes at cell-layer resolution. Fröschel et al. tackled this problem by conducting root cell layer-specific TRAP-seq (translating ribosome affinity purification and RNA sequencing) in Arabidopsis interacting with pathogenic and mutualistic microbes that show distinct colonization strategies. Epitope-tagged ribosomal proteins were expressed in one of three root cell layers—epidermis, cortex, or stele; ribosomal complexes were purified by immunoprecipitation, and the associated actively translated mRNAs were analyzed by RNA-seq. Upon infection with the vascular pathogen Verticillium longisporum, genes related to the formation of endodermal barriers (Casparian strip and suberin) were downregulated, associated with decreased suberin accumulation in the endodermis. The authors showed that such genes are required for limiting the growth of the vascular pathogen. Moreover, genes involved in the biosynthesis of the phytohormone ethylene and antimicrobial secondary metabolites were induced in specific cell layers by pathogenic fungi and oomycetes, but not by mutualistic fungi. This study demonstrates root cell layer-specific translatome as a powerful strategy for the mechanistic dissection of root-microbe interactions. (Summary by Tatsuya Nobori @nobolly) Cell Host & Microbe 10.1016/j.chom.2020.11.014 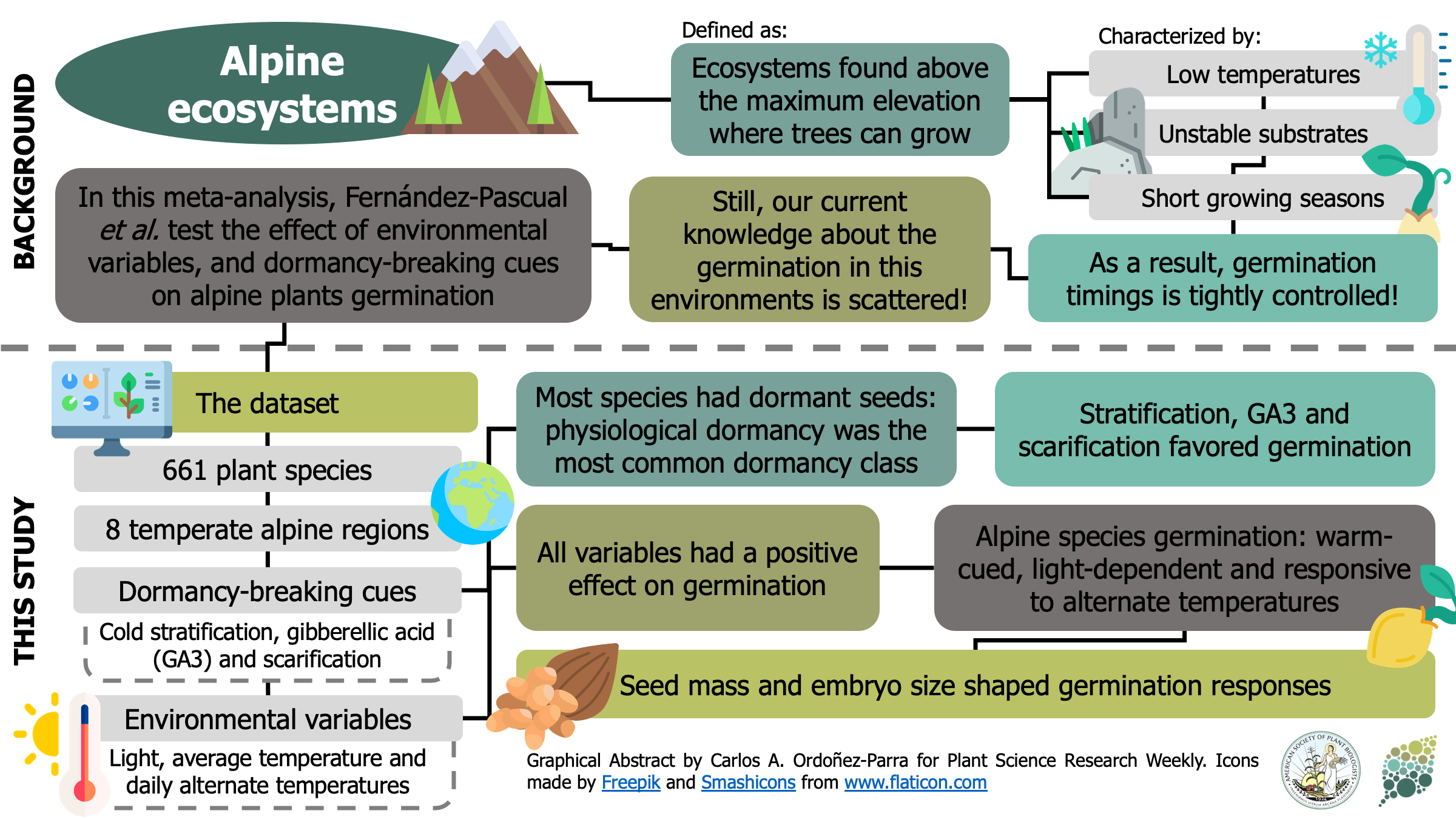 Alpine ecosystems include all the environments found above the treeline, the maximum elevation where trees can grow. These environments are known for their low temperatures, unstable substrates, and short growing seasons. However, while germination studies in this ecosystem can be traced back to the 1930s, our knowledge about its germination ecology remains scattered in multiple individual studies. In this meta-analysis, Fernández-Pascual and colleagues use a database of 661 species from 8 alpine regions of the world to assess the effect of light, temperature, and dormancy-breaking cues on the germination of non-tropical alpine species. Most species had dormant seeds, and physiological dormancy was the most common dormancy class. Accordingly, cold stratification, gibberellic acid, and –to a lesser extent– scarification promoted germination. Additionally, average temperatures, alternate daily temperatures, and light positively affected germination, suggesting most alpine species require warm temperatures to germinate. Interestingly, seed morphology shaped seed responses to environmental variables; heavier seeds with larger embryos are less responsive to temperature increase. Given this exhaustive overview, this paper is an obligate reading for everyone interested in alpine seed ecology. (Summary by Carlos A. Ordóñez-Parra @caordonezparra) New Phytol. 10.1111/nph.17086

Distribution of seed dormancy classes across a fire-prone continent: effects of rainfall seasonality and temperature 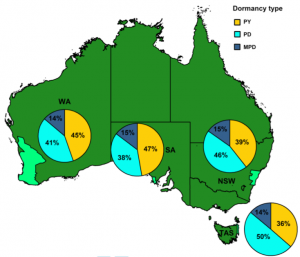 Seed dormancy controls germination so that it occurs under the most suitable conditions. Different dormancy classes achieve this by allowing germination in response to distinct environmental cues. In fire-prone ecosystems, species with physically dormant (PY) seeds benefit from fire since it breaks their impermeable seed coat. In contrast, those with physiological dormancy (PD) respond to alternate temperatures and smoke found in burnt sites. Therefore, these classes are expected to be subject to different selective pressures. In this exciting research, Colette and Ooi assess how the variation in the dormancy classes’ relative frequency is correlated with regional environmental factors in temperate Australian shrublands. A dataset from nearly 4000 plant species from four states was assembled. Overall, dormant seeds were more frequent in warmer environments. Still, different responses were found when analyzing PY and PD separately. While PD was more likely in aseasonal climates with cooler temperatures, PY was unrelated to temperature but more likely in highly seasonal climates. As a result, this paper provides fascinating insights into how climatic variables shape a dormancy class’s prevalence. (Summary by Carlos A. Ordóñez-Parra @caordonezparra) Ann. Bot. 10.1093/aob/mcaa203 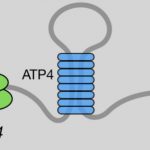 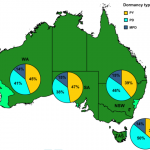 Distribution of seed dormancy classes across a fire-prone continent: effects...
Scroll to top