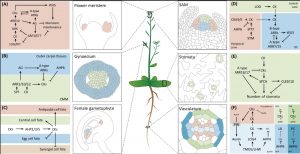 With its diverse chemical structures, the phytohormone cytokinin is significant from embryogenesis to the maturation of plants. In this review, Wybouw and De Rybel highlight in detail cytokinin signaling in multiple plant developmental process including shoot, flower, stomata, root and vascular development. The Type B-ARRs (ARABIDOPSIS RESPONSE REGULATORS) induce multiple cytokinin responsive genes like WUSHEL in shoot apical meristem development, AGAMOUS during flower development and SPEECHLESS during stomata development. Activation of these response genes triggers signaling cascade for organogenesis which is still being explored. Moreover the authors discuss tools for visualization of cytokinin levels as a limiting factor in understanding cytokinin function. Auxin and cytokinin interplay in organ development adds another level of complexity to understand how cytokinin responses are spatiotemporally regulated. Determining cytokinin response gene signaling and interaction with other hormones will help uncover its mechanism in development. (Summary by Suresh Damodaran) Trends Plant Sci. 10.1016/j.tplants.2018.10.012 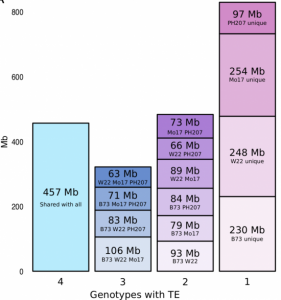 Transposable elements (TE) constitute a large percentage of the maize genome. However, traditional studies based on reference genome alignment can result in large fragments that cannot be aligned, which could be due to TE insertions. The de novo assembly of four representative maize inbreds, B73, W22, Mo17 and PH207, provides an opportunity to compare TEs across genotypes within-species. Using a novel TE comparison method, Anderson et al. found that each species owned around 15% to 25% unique TE. Incorporation of more subspecies genome assemblies, if possible, could facilitate the identification of more variable TEs. Further investigation showed that more than 2,000 genes are overlapped with TEs. This study provides an explanation of the genomic and phenotypic variation among subspecies in maize. (Summary by Zhikai Liang) bioRxiv: 10.1101/547398 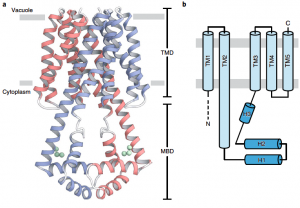 Iron is an essential nutrient for plants that participates in cellular processes such as DNA replication, photosynthesis, and respiration. Excess iron accumulation is harmful to plants due to its participation in the generation of reactive oxygen species, which can damage cellular machinery. One of the ways to detoxify iron is to sequester it in the vacuole where it can be separated from important enzymes and macromolecules. In this paper, Kato et al. characterized the crystal structure of VIT1, a vacuolar iron transporter, from Eucalyptus grandis. They further dissected its function by testing its transport specificity and the necessity of amino acids within its metal binding domain. Since VIT1 has previously shown seed specific activity, further understanding of its structure and function may elevate its importance as a target for crop biofortification to address human iron deficiencies. (Summary by Nathan Scinto-Madonich) Nature Plants. 10.1038/s41477-019-0367-2 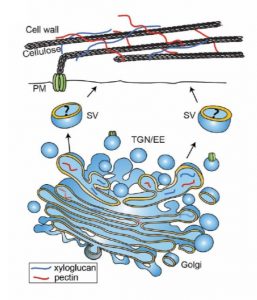 Endomembrane vesicles carry not only secreted proteins but also carbohydrates for cell wall synthesis, yet relatively less is know about this latter process. Wilkop et al. describe a method to investigate the glycan contents of specific subsets of vesicles, to begin to understand how these cargos are affected by environmental conditions and developmental processes. They developed a hybrid method in which selected vesicles are isolated through a bait protein on the surface, and then the vesicles’ contents are characterized through carbohydrate-specific monoclonal antibodies, to reveal the vesicle-specific glycome; specifically, that of the SYNTAXIN OF PLANTS61 (SYP61) trans-Golgi network (TGN) compartment in Arabidopsis thaliana seedlings. (Summary by Mary Williams) Plant Cell 10.1105/tpc.18.00854 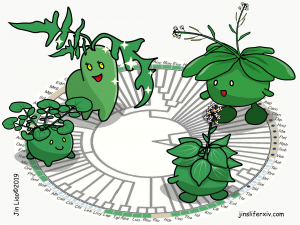 Many economically important crops are in the Brassicaceae family, such as cabbage, mustard, and the model plant Arabidopsis thaliana. Recently, the systematics of Brassicaceae has assigned most of the species to 52 monophyletic groupings (tribes). However, relationships along the backbone of the phylogeny and among tribes remain largely unknown because of the lack of resolution. To break this limitation, Nikolov et al. reconstructed a robust phylogenetic framework together with the comparative transcriptome analysis to study the leaf shape evolution in the Brassicaceae family. Their phylogenomic study benefits the future genomic, developmental, and evolutionary studies among the Brassicaceae family, which allows us to understand the genetic basis for the evolution of development in crucifers. (Summary and grapical abstract by Jin Liao) New Phytol. 10.1111/nph.15732 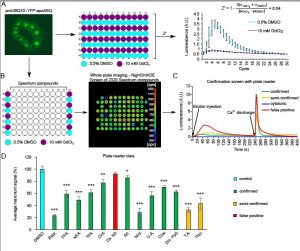 Plants can adjust their shape, size and number of organs, grow according to gravity and light, and regenerate damaged tissues, through the action of the plant hormone auxin. Another versatile signal comes from Ca2+, which is a crucial second messenger for many cellular processes during responses to a wide range of endogenous and environmental signals. Auxin is a good candidate for one of the Ca2+-activating pathways but little is known about its role. De Vriese et al. screened a biologically annotated chemical library for inhibitors of an auxin (2,4-D)-induced Ca2+ response in order to better understand the molecular mechanism of auxin-induced Ca2+ signaling and to explore the role of Ca2+ in cellular auxin responses. They defined 67 confirmed inhibitors:

Further exploration of these inhibitors will lead to a better understanding of auxin-induced Ca2+ entry and its relevance for auxin responses. (Summary by Francesca Resentini) Plant Physiol. 10.1104/pp.18.01393 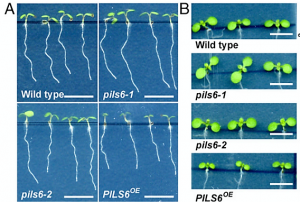 Auxin, a plant hormone and major growth regulator, is fundamental for adaptations to climatic variation in shoots but its role in roots under elevated temperatures is more controversial. PIN-LIKES (PILS) 2, 3 and 5 proteins have previously been identified to restrict nuclear auxin signalling but the role of PILS6 is less studied. Here, by developing PILS6 gene knockout plants, Feraru et al. demonstrated that the protein functions as a negative regulator in auxin accumulation and perception in the endoplasmic reticulum. Furthermore, under high temperatures (>27oC) the abundance of PILS6 decreases allowing for increased nuclear auxin signaling, leading to promoted root growth. The authors conclude that PILS proteins are important for abiotic adaptations and their identification is a significant step in understanding how rising ambient temperatures will affect plant development and growth (Summary by Alex Bowles) PNAS 10.1073/pnas.1814015116. 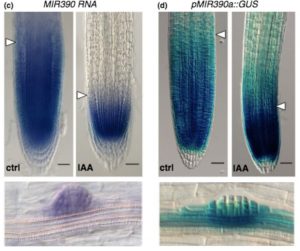 Previous studies have indicated that auxin controls gene expression via regulatory transcriptional networks, mediated by a family of DNA-binding auxin response factors (ARFs) that bind to auxin response DNA elements (AuxREs) in the promoters of genes. In this study, Dastidar et al. investigated the localization of the microRNA miR390 expression and how it is regulated in response to auxin at the root meristem in Arabidopsis. After the analysis of mutants using transcriptional reporters and ChIP-qPCR assays, the authors localized miR390 expression in the in “the transit‐amplifying compartment of the root meristem where it modulates response to exogenous auxin”. The results show a single enhancer and an specific AuxRE in the miR390 promoter responsible for its expression in this region and identify ARF5/MONOPTEROS as an upstream regulator of miR390, interacting directly with this enhancer via the AuxRE. Studying the signalling circuits of the miR390 network is important to understand the foundations of morphological diversity in plants. (Summary by Ana Valladares) Plant Direct 10.1002/pld3.116 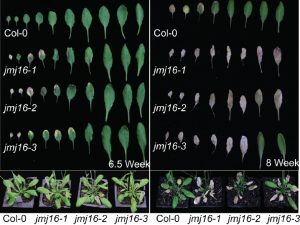 Leaf senescence is the final stage of leaf development where the organ turns yellow and programmed cell death occurs. While it is generally understood that the regulation of senescence associated genes (SAGs) is dependent on the trimethylation of histone H3 at lysine 4 (H3K4me3), the exact mechanism is unknown. In a new study, authors Liu et al. identified a JmjC-domain containing protein (JMJ16) in Arabidopsis thaliana which negatively regulates senescence by acting as an H3K4 demethylase. The authors measured an increase in SAGs in the loss-of-function jmj16 mutants and genetic analysis confirms that JMJ16 represses the expression of two genes associated with senescence (WRKY53 and SAG201) by demethylating H3K4 at the loci of the genes. Furthermore, the protein abundance of JMJ16 decreases during leaf development, suggesting that down-regulation of JMJ16 is associated with the age of the leaf and a prerequisite for the initiation of leaf senescence. Overall, this study identifies the first enzyme responsible for the regulation of leaf senescence through histone methylation. (Summary by Nick Segerson) Plant Cell 10.1105/tpc.18.00693 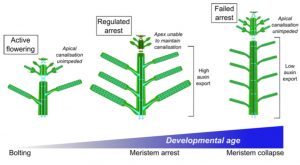 The control of the beginning and the ending of the reproductive phase in plants are important factors related to seed and fruit production. Almost one century ago, it was noticed that fruit removal delays the floral arrest, and a model was proposed in 1994 by Hensel et al., highlighting the role of fruits in the Global Proliferation Arrest (GPA). In a recent preprint, Ware et al., focussed on the fruit-to-meristem communication phenomenon, and got new clues about GPA. They performed partial and differential flower removal, inflorescence lifetime tracking, and hormone treatments. They found the arrest of the meristems is locally controlled, that auxin is the signal that mediates the fruit-to-meristem communication, and that proximal fruits provide this hormone. These observations help to refine the model for the induction of floral arrest which will serve as a base for applications towards extending flowering to maximize crop yields. (Summary by Humberto Herrera-Ubaldo) bioRxiv 10.1101/542662 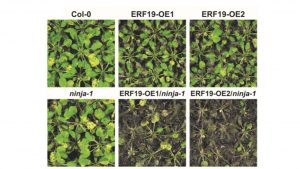 To fight off invading pathogens, higher plants such as Arabidopsis are intrinsically programmed with a subset of defense responses known as pattern-triggered immunity (PTI). However, excessive defense responses may hamper plant’s normal growth, so fine-tuning PTI is important for plant survival. Recently, Pin-Yao et al. report that a member of the ethylene response factor called ERF19 can negatively regulate PTI of Arabidopsis. Overexpression EFR19 or disruption of ERF19’s function leads to weakened and enhanced plant resistance to pathogens, respectively. In addition, they found the function of ERF19 is negatively controlled by a transcriptional co-repressor Novel Interactor of JAZ (NINJA). This study shows that plants have evolved with a sophisticated defense mechanism to modulate the balance between growth and immunity when maximizing their chance of survival. (Summarized by Nanxun Qin) J. Exp. Bot 10.1093/jxb/ery414 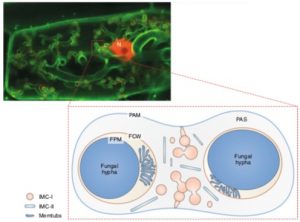 In the arbuscular mycorrhizal fungal interaction with plants, the fungal partner promotes nutrient acquisition in exchange for some sugar and fatty acids from host plants. This exchange occurs at the symbiotic interface in the plant cortical cells where fungal hyphae form special branched structure called arbuscules, which are enveloped by host-derived peri-arbuscular membranes (PAM). Two ultrastructural studies by Ivanov et al. (2019) and Roth et al. (2019) analysed arbuscular structures in plant cortical cells using high resolution transmission electron microscopy tomography and three dimensional structural reconstruction. Both studies revealed vesicular and tubular compartments within the matrix of the peri-arbuscular space, irrespective of the plant-fungal system studied, as well as novel tubular structure originating from the fungal cells and present exclusively in the arbuscules. The functional relevance of these structures is yet to be confirmed. (Summary by Mugdha Sabale). Nature Plants 10.1038/s41477-019-0365-4 and 10.1038/s41477-019-0364-5 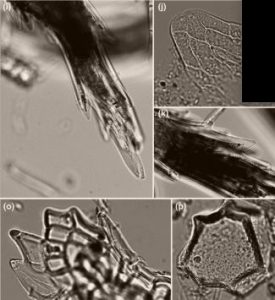 When monosilicic acid is present in the soil, many plants absorb it through their roots and precipitate rigid silica aggregates known as phytoliths. Phytolith deposition has been observed in all major groups of vascular plants, however the patterns of deposition in bryophytes are comparatively under studied. Phytoliths can persist long after the plant has perished, so they offer unique insight into the history of plants. Thummel et al. conducted a survey of phytolith deposition patterns within liverworts, mosses, and hornworts and used published phylogenies to create ancestral state recreations for liverworts and mosses to understand how their silica production has changed throughout evolutionary time. They also aimed to determine the viability of using fossilized phytolith deposits to learn about the emergence of bryophyte lineages. Across the bryophytes surveyed, phytoliths were found in all clades and multiple subclades with variation in degree of deposition and phytolith morphology. There was a correlation between higher deposition and liverworts and mosses with specialized water-conducting cells. The ancestral state recreations revealed that liverworts and mosses have likely evolved high silica deposition in separate lineages multiple times independently, rather than from the previously theorized ancestor with heightened phytolith deposition. Certain morphological characteristics of phytoliths were clade- or genus-specific, meaning that phytoliths with those structures could be successfully used to study the evolution of bryophytes and more specifically water conductance in early land plants. Thummel et al. provide the first broad survey of phytoliths in bryophytes as well as an exciting potential for use in future paleobotanical studies. (Summary by Rebecca Hayes) New Phytol. 10.1111/nph.15559 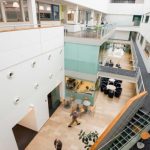