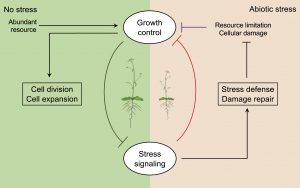 What exactly is the growth/defense tradeoff? This review is an excellent place to ask. Zhang et al. review evidence that shows that it is much more than a competition for limiting resources – the plant actively responds to stress in ways that may slow growth but ultimately promote survival. The authors thoroughly summarize key stress signaling molecules such as ROS, and regulatory proteins including the very important SNF1-related protein kinases (SnRKs). They also describe the crucial role of the ABA pathway in stress signaling and response. They then discuss the mechanisms by which stress affects growth, in terms of cell cycle control and cell expansion, energy balance, and the TOR growth-promoting complexes. A key conclusion is that there is not one “see-saw”-like control point, but rather many signals that are integrated into these reciprocal outcomes. The authors note that efforts to breed stress-resistant crops have been largely unsuccessful due to the unintended negative impacts on growth. However, they stress that new insights are likely to break the growth-defense tradeoff, for example by lowering the plants sensitivity to stress signaling or using more finely tuned or tissue-specific interventions. (Summary by Mary Williams @PlantTeaching) Devel. Cell 10.1016/j.devcel.2020.10.012 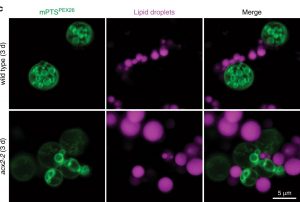 The ability to utilize stored energy is crucial for organism growth and development. For example, seed storage lipids go through hydrolysis and beta-oxidation to provide energy for seed germination. In this process, beta-oxidation occurs in the peroxisome, a subcellular compartment that houses many metabolic reactions. Insights into peroxisome structure have now emerged from a study by Wright and Bartel. They discovered many membrane-enclosed vesicles free-floating in the peroxisome matrix; they named these intralumenal vesicles, ILVs. The observation was made possible by the relatively large Arabidopsis peroxisomes present during seedling development and improved bright fluorescent protein reporters. Further examining how the ILVs are formed, the authors show that the ESCRT (endosomal sorting complexes required for transport) machinery is involved in deriving the ILVs from the peroxisome outer membrane; in addition, the peroxisome shrinks while forming ILVs. Peroxisome size dynamic has been discussed in previous studies: when beta-oxidation is impaired, the peroxisomes are enlarged. Here, the authors show that peroxisomes not only enlarge in Arabidopsis beta-oxidation mutants, but that they also form fewer ILVs, and the ILVs are often still attached to the peroxisome outer membrane. Based on these findings, the authors proposed a model: as insoluble fatty acids are incorporated into the peroxisome lipid bilayer (outer membrane), fatty acid-enriched membranes may form as ILVs to supply fatty acids for beta-oxidation. (Summary by Yun-Ting Kao @YTingKao) Nature Comms. 10.1038/s41467-020-20099-y 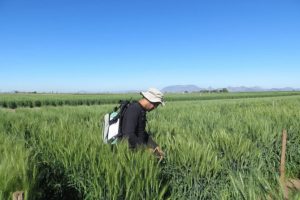 Efficient phenotyping is important for plant breeding. For wheat, leaf reflectance spectra can be used to calculate leaf traits that impact crop yield, particularly constituent (leaf mass per area, nitrogen/chlorophyll content) and physiological (Rubisco carboxylation activity, electron transport rate, respiration rate) traits. However, experiments and models that correlate leaf reflectance spectra with these phenotypes have largely been performed within a set temperature or defined range of temperatures; as such, it is yet unclear exactly how leaf temperature affects such calculations. To this end, Khan et al. measured the effects of leaf temperature on the estimation of traits measured from leaf reflectance spectra in two wheat cultivars. They determine that over their chosen temperatures (ranging from 20 to 35°C), values of Rubisco carboxylation activity and nitrogen/chlorophyll content were not affected, but leaf mass per area and Rubisco activity normalized to nitrogen content increased slightly with increasing temperature. The work in this study suggests that leaf reflectance spectra should be collected at a range of temperatures, to attain the most robust models for estimating leaf traits. (Summary by Benjamin Jin) J. Exp. Bot. 10.1093/jxb/eraa514 (Image credit ARC Centre of Excellence for Translational Photosynthesis)

Auxin shapes the plant body and drives the formation of lateral organs such as roots and ovules. In the current model, AUXIN RESPONSE FACTORs (ARFs) are transcription factors that regulate plant growth by activating signaling in an auxin dose-dependent manner, regulated by Aux/IAA proteins. Here, Cucinotta and coworkers demonstrate a new twist on this paradigm, by showing that MONOPTEROS (MP) is an ARF with regulatory roles independent of auxin concentrations. The authors found that an alternative splice variant of MP, characterized by retention of intron 11 (MP11ir), is specifically expressed in inflorescences and accounts for 6% of total MP transcripts. MP11ir encodes a truncated isoform that retains the DNA-binding domain but lacks the Aux/IAA interaction domain. To functionally characterize the two isoforms, vectors expressing the full-length sequence (pMP:MP) or the splice variant (pMP:MP11ir) were introduced into plants carrying the weak allele mpS319, which displays defects including abnormal pistils and ovule abortion. The full-length construct more efficiently rescued the patterning defects of mpS319 pistils, whereas the splice variant better complemented impaired development of mpS319 ovules. These findings revealed a tissue-specific function of the non-canonical MP11ir, and showed that it can function in spite of low auxin levels (Summary and image adaptation by Michela Osnato @michela_osnato) Curr. Biol. 10.1016/j.cub.2020.11.026 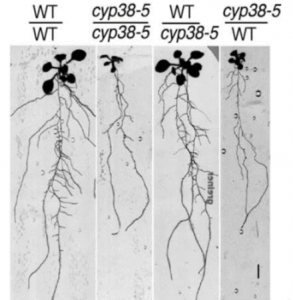 Photosynthesis, in addition to generating ‘food’ for plants, is also known to control root growth, although the mechanism has been unknown. Duan and co-workers identified CYCLOPHILIN38 (CYP38) as necessary for photosynthesis-mediated lateral root (LR) emergence. The chloroplast-localized CYP38 is necessary for assembly of photosystem II, and its mutants show defects in LR emergence, linking it to the elusive shoot-derived signal. Grafting experiments between wild type and cyp38 mutants hinted that CYP38 is required for LR emergence, but the protein itself is not transported from shoot to root. Measurement of endogenous auxin and grafting experiments revealed that roots of cyp38 mutants have reduced auxin levels, but grafting to the wild-type scion led to auxin accumulation in cyp38 root stock. Thus, the authors conclude that photosynthesis regulates LR emergence through systemic shoot-to-root transport of either auxin or a metabolite that induces its biosynthesis. (Summary by Pavithran Narayanan @pavi_narayanan) Plant Physiol. 10.1093/plphys/kiaa032 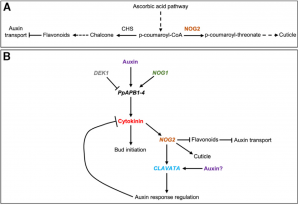 Three-dimensional (3D) growth was an essential evolutionary innovation that allowed the radiation and diversification of land plants. In most land plants the transition from two-dimensional (2D) to 3D growth takes place during embryo development and its disruption results in lethality, however, the disruption of the 2D to 3D growth in Physcomitrella (Physcomitrium) patens is not lethal. This transition occurs twice during development: from 2D filamentous growth towards the 3D gametophores (also known as “leafy shoots”) and during embryo development, thus making moss an excellent model to dissect the genetic basis of the 2D to 3D growth transition. Although many positive and negative regulators of this transition have already been identified, Moody et al. discovered an additional layer of regulation by making use of forward genetics and segregation analyses: NO GAMETOPHORES 2 (PpNOG2), an enzyme in the ascorbic acid biosynthetic pathway that allows crosstalk between auxin and cytokinin. NOG2 loss-of-function (LOF) mutants display a range of developmental aberrations in gametophore initials (buds), invariably leading to arrested buds. Subsequent gene expression analyses revealed a network in which NOG2 expression responds to cytokinin and acts downstream of known regulators of the 2D à 3D transition and upstream of SCARECROW and CLAVATA. In addition, NOG2 LOF mutants show disruptions in auxin-responsive genes, which led the authors to hypothesize that loss of NOG2 leads to a metabolic flux change towards flavonoid accumulation and consequential inhibition of auxin transport, thus establishing a bridge between metabolic pathways and the 2D à 3D growth transition in P. patens. (Summary by Jesus Leon @jesussaur) Curr. Biol. 10.1016/j.cub.2020.10.077 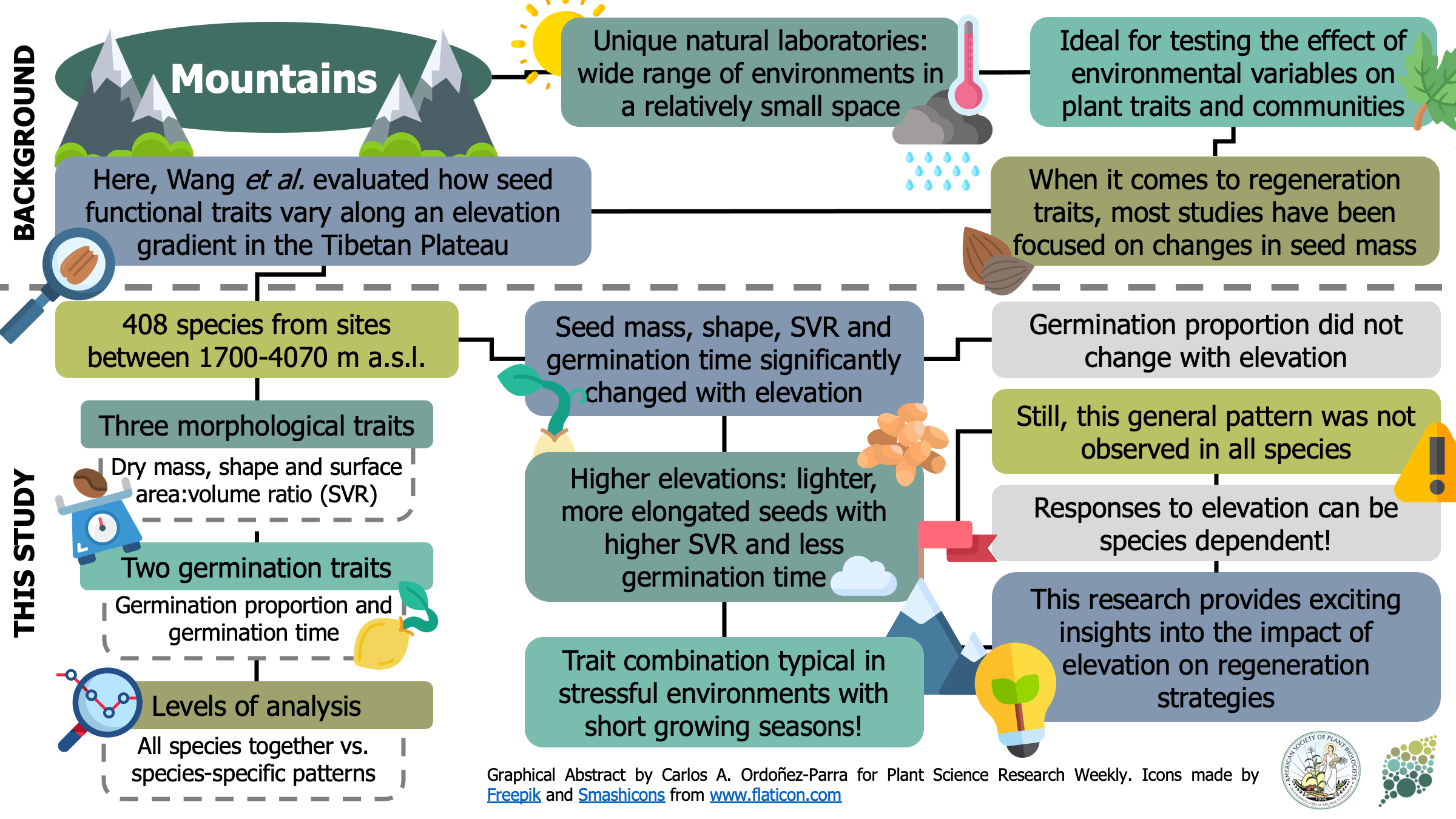 Mountains are extraordinary natural laboratories. They encompass a wide range of environments in a relatively small space, making them ideal for assessing how different environmental variables shape plant traits and communities. Here, Wang and colleagues evaluate how seed functional traits vary along an elevation gradient in the Tibetan Plateau. Seeds of 408 grassland species were collected in sites between 1700 and 4070 meters above sea level. For each, three morphological [seed mass, shape, and surface area:volume ratio (SVR)] and two germination (germination proportion and time) traits were recorded. Overall, seeds from higher elevations were lighter, more elongated, and had higher SVRs. Moreover, they germinated faster. This combination of traits has been traditionally associated with plants living in stressful environments with short growing seasons, which is the case of high-mountain sites. However, when the authors assessed the same changes within species, not all reflected these overall patterns, suggesting that some species might evolve distinct responses to elevation. As a result, this research provides exciting insights into the influence of elevation on plant regeneration strategies. (Summary by Carlos A. Ordóñez-Parra @caordonezparra) Ecography 10.1111/ecog.04972 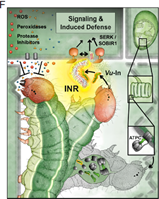 Inceptins are degraded fragments of host chloroplast ATP synthase subunit (cATPC) that are an important class of herbivore-associated molecular patterns (HAMPs). These peptides are abundant in herbivore oral secretions (OS). Using Vu-In, a conserved inceptin from cowpea, Steinbrenner and colleagues have identified a receptor-like kinase (RLK) that specifically senses inceptins in a subtribe of legumes. By studying responses to Vu-In and a weaker variant specially associated with legume family, the authors identified a locus encoding a leucine-rich repeat (LRR)-receptor-like protein (RLP). In agreement with Vu-In’s conservation in a subtribe of legumes closely related to cowpea, the INR locus also is confined to the subtribe. Further, by coimmunoprecipitation (Co-IP), the authors showed direct binding of INR to Vu-In and its association with a co-receptor and an adaptor kinase. Moreover, stable expression of INR in tobacco plants was sufficient to elicit defense responses against inceptin. (Summary by Pavithran Narayanan @pavi_narayanan) Proc. Natl. Acad. Sci. USA 10.1073/pnas.2018415117

Mutagenomics: The Future of Genetic Screens 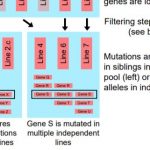 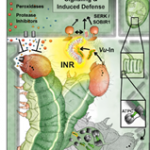