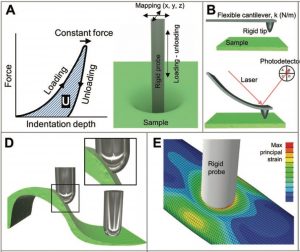 Plant growth and morphogenesis are linked to cell wall properties, so a deep understanding of cell wall biochemistry and mechanics is essential for studying plant development. In a recent review, Bidhendi and Geitmann describe current and emerging techniques for the analysis of cell wall mechanics. Classic techniques involve the application of a force (stretching, compression, bending) and measuring the cell response. As an example, one of the most widely used is the indentation technique (the application of a force and the measure of sample deformation), which gives information about the elastic, plastic and viscoelastic properties. Atomic force microscopy (AFM) is an indentation technique that has been used for mapping tissue surface topography. Stimulation with acoustic waves (acoustic elastography) can reveal additional information about the physical properties of a biological sample. Microelectromechanical systems (MEMS) and microfluidic devices are emerging tools for quantifying mechanical properties in living cells. The authors also discuss how the information obtained with the above-mentioned techniques can be combined with computational approaches to build multiscale models. A comprehensive glossary of key terms is provided. (Summary by Humberto Herrara-Ubaldo) J. Exp. Bot. 10.1093/jxb/erz281 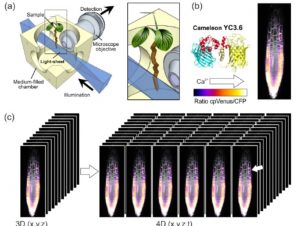 Maintaining nutrient homeostasis is ridiculously challenging, in large part due to the tremendous effects individual nutrients have on other nutrients’ uptake and action, as well as the interactions between nutrient homeostasis and environmental conditions. In order to maintain the “right” amount of a nutrient, the plant needs to sense how much is present within its tissues and within the pool from which it will be taken up, and transduce this information to various transporters and processing enzymes. It’s clear that calcium signaling is central to these processes, as reviewed by Vigani and Costa. They summarize evidence for the role of calcium signaling for various nutrients (K, N, Mg, Fe, B). They also review different methods for analyzing calcium signaling such as the genetically-encoded calcium indicator Cameleon, intensiometric versus ratiometric sensors, and light sheet fluorescent microscopy. Finally, they conclude with a discussion of areas where more study is needed, such the development of tools with better spatial and temporal resolution, and the need to determine how specificity is encoded in the calcium signals. (Summary by Mary Williams) Plant Cell Environ. 10.1111/pce.13611 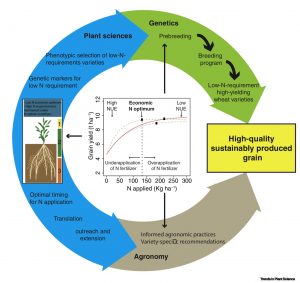 Current and future food production demands a lot of  nitrogen (N) fertilizers. Inefficient N fertilization leads to N losses to the environment and generates greenhouse gases that cause environmental problems. In a recent article, Swarbreck and colleagues discuss a strategy to develop crop varieties with low N requirement; this approach would need strong collaboration between farmers, breeders, and plant scientists, as described below. Lowering global N application requires changes in farmer decisions: when, how and how much fertilizer to apply. These decisions are affected by the fertilizer cost, crop system, and market demands. In this sense, agronomic information and training could have a great impact. Plant breeders should evaluate lines in both high- and low-N conditions. Ideally, new varieties should have a low N optimum (the N level necessary to achieve a high yield). Finally, plant scientists can continue to elucidate N responsiveness at the molecular level. Some advances have been made in establishing how internal and external N levels are monitored by the plants, and how those signals are transduced into a phenotypic response. (Summary by Humberto Hererra-Ubaldo) Trends Plant Sci. 10.1016/j.tplants.2019.06.006

Review: The evolution of betalain biosynthesis in Caryophyllales 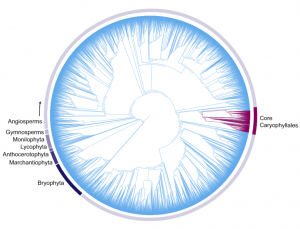 In the flowering plant order Caryophyllales (which includes beets), betalains substitute for anthocyanins, which are the most common form of pigmentation across the land plant phylogeny. Also found in the Basidiomycota fungal lineage, betalains are tyrosine-derived pigments that comprise of two groups of compounds, betaxanthins (yellow) and betacyanins (violet). Anthocyanins have never been detected within betalain-producing species and as such, the evolution of betalains has received much research. Here, Timoneda et al. discuss the evolution of betalain biosynthetic pathways in Caryophyllales. Further, the authors consider the impact of phylogenetics for informing our understanding of the evolutionary history of fundamental enzyme-coding genes. The review concludes by proposing a model for the evolution of betalain pigmentation (Summary by Alex Bowles) New Phytologist 10.1111/nph.15980.

Light serves as the source of energy as well as an information signal for photosynthetic plants. During evolution, plants have acquired the ability to monitor environmental light radiation and adjust their developmental patterns to optimally utilize light energy for photosynthesis. However how the early-diverging terrestrial plants acquired the ability of photosynthesis when they left sea and colonized the land remains mysterious. Recently Du et al. found that the fungus Mortierella elongate physically interacts with the marine alga Nannochloropsis oceanica, thus formed a stable mutualism upon an exchanges of nutrients between two species. This symbiosis relationship even resulted in the incorporation of intact algal cells within fungal hyphae, which leads to the formation of photosynthetic mycelium. In other fungal/algal mutualisms such as lichen, the algal cells remain external to the fungal cells. Thus, this discovery not only boosts the study of biotechnologically important species for biofuel production, but also provides some clues about the process of endosymbiosis. (Summary by Nanxun Qin) eLIFE 10.7554/eLife.47815.001 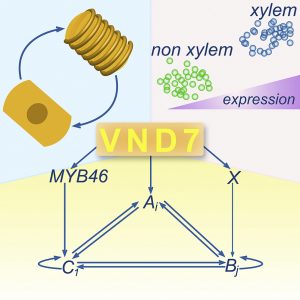 Xylem is involved in the movement of water and mineral nutrients through the plants from the roots to leaves; its cells are not totipotent and undergo programmed cell death. VASCULAR-RELATED NAC-DOMAIN (VND) transcription factors are master switches of xylem cell differentiation in Arabidopsis and much has been learned about their transcriptional regulatory network. However, little is known about the molecular mechanisms that regulate the terminal cell differentiation in xylem, and how these mechanisms are distinct from the differentiation of plant cells that maintain totipotency. Turco et al. investigated how VND7 influences xylem differentiation by generating whole-root and single-cell transcription data, with the aim to screen for potential VND7 downstream target genes mediating the developmental switch to xylem cell identity. Of 15 candidate switch genes only four are VND7 direct targets (A).  Even if VND7, MYB46, and MYB83 transcription factors are described to be interconnected in feedforward loops, only one gene has been found as a MYB46 direct target (C), and 10 neither VND7 nor MYB46 targets (B). The authors identified several distinct classes of downstream target genes, and new candidate genes for participation in the developmental switch for xylem cell differentiation. This work provides insight into properties that control the formation of a cell type critical for plant development/growth and the transition of plants from water to land. (Summary by Francesca Resentini) Cell Reports 10.1016/j.celrep.2019.06.041

Indole-3-butyric acid (IBA) is the precursor of the hormone auxin and it controls the formation of lateral roots. Evidence suggests that IBA is converted to IAA, endogenous active auxin. The major study material to distinguish between IBA and IAA was highlighted by the IBA-specific efflux carrier ABCG36/PDR8/PEN3, and abcg36 mutant hyperaccumulates IBA in the root. Michniewicz et al. performed a suppressor screening using pen3-4, an allele of ABCG36, to identify additional IBA transporters, and from their screening, they found TRANSPORTER OF IBA1 (TOB1) as a tonoplast-localized IBA transporter. tob1 mutants are resistant to both IBA and its synthetic analog 2,4-dichlorophenoxy butyric acid (2,4-DB). Interestingly, along with IBA and 2,4-DB, it also transports nitrate and is also known as NPF5.12. Additionally, tob1 mutants have higher lateral root density, consistent with defects in IBA transport Furthermore, the authors showed that TOB1 expression is regulated by cytokinin. Altogether, this work illustrates a nice working model focusing on TOB1, which integrates auxin homeostasis and cytokinin response to maintain root system architecture. (Summary by Arif Ashraf) Developmental Cell 10.1016/j.devcel.2019.06.010 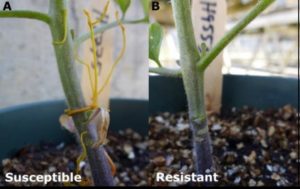 Dodder (Cuscuta campestris) is a plant that parasitizes other plants by forming penetrating haustoria through which they tap into the host’s vascular tissues and extract nutrients. Most tomatoes are susceptible, but a few varieties are resistant. Jhu and Farhi et al. examined these resistant varieties to determine the genetic basis for resistance, using comparative transcriptomics and gain-of-function studies in susceptible lines. They found that both resistant and susceptible cultivars exhibited wound responses and localized cell death, but only the resistant plants showed enhanced stem lignification which prevented haustorial penetration. The authors also identified two transcription factors involved in the lignification response which, when introduced into susceptible cultivars, leads to enhanced lignification and resistance to dodder. (Summary by Mary Williams) bioRxiv 10.1101/706861. 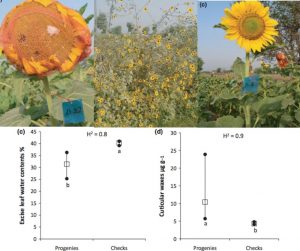 Algal-fungal symbiosis may account for the origin of basal land plant species... 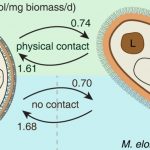 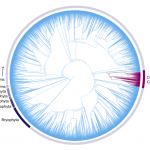 Review: The evolution of betalain biosynthesis in Caryophyllales (New Phyto...
Scroll to top