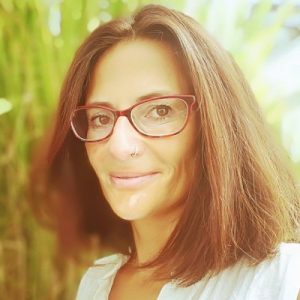 I completed my studies at the University of Milan (ITALY), with a M.S. in Plant Biotechnology and a PhD in Plant Biology and crop productivity. The plasticity of plant development has always fascinated me. For this reason, I decided to investigate regulatory genes controlling the development of vegetative and reproductive organs in Arabidopsis and cereals. Recently, I have focused my research on plant adaptation to climate change (e.g. elevated ambient temperature, water limitation, soil salinity). Despite thinking of myself as a motivated biotechnologist, my interest for public engagement progressively swayed me towards the participation in different outreach activities. Among others, I developed my own science communication project and disseminated science using Social networks (@secretlifeofaplantbiologist). I am currently a member of the Plantae fellow program and regularly contribute to Science News stories with summaries and graphical abstracts.

Trade‐off between seed dispersal in space and time 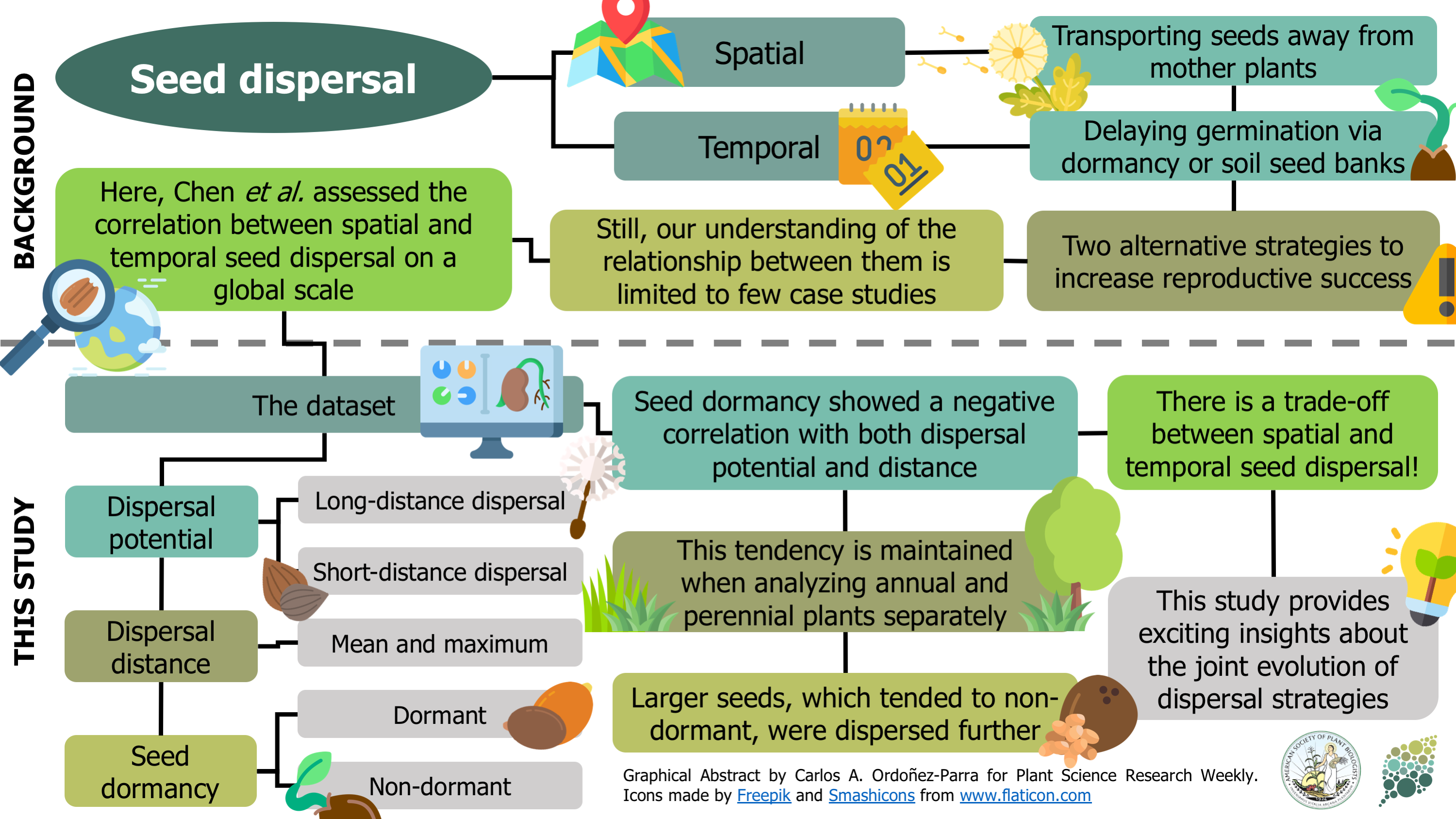 Seeds can be dispersed in space (i.e., away from their mother plants) or time (i.e., delayed germination via seed dormancy or persistent soil seed banks). These contrasting strategies have traditionally been considered to increase reproductive success, but our understanding of their relationship is limited to a few study cases. Here, Chen et al. provide the first assessment of the correlation between spatial and temporal seed dispersal on a global scale. For the time component, species were classified into dormant and non-dormant. For the space component, species dispersed by animals, wind, or water were considered to have long-distance dispersal potential, while species without specialized dispersion were supposed to have short-dispersal potential. Also, the authors recovered dispersal distances from the literature. Both seed dispersal potential and distance negatively correlate with dormancy, meaning dormant seeds were more likely to have short-distance dispersal and reduced dispersal distances. Interestingly, this tendency was maintained when analyzing annual and perennial plants, suggesting that other plant life traits influence this negative interaction. As a result, this study provides robust evidence of a trade-off between spatial and temporal seed dispersal and offers fascinating insights into these strategies’ joint evolution. (Summary and graphical abstract by Carlos A. Ordóñez-Parra @caordonezparra) Ecol. Lett. 10.1111/ele.13595 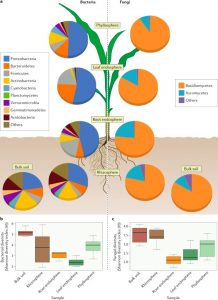 The association of plants with communities of beneficial microbes,  called plant microbiota, has a positive effect on growth and proliferation of both organisms. Recent findings in plant microbiota research uncovered the role of individual microbes and associated genes during plant-microbe interaction at a community level, showing similar taxa of microbes and related genes shared between the vast majority of plants and microbes. In this paper, Trivedi et al. reviewed the mechanisms that drive the assembly of plant associated microbiomes at the community level. The authors reported a detailed illustration of the structure of bacterial and fungal communities at various plant-associated niches and uncovered the role of diverse plant parts in shaping the composition of the microbiota. The authors also showed the role of ‘hub’ microorganisms present within ‘core’ microbiota in mediating the association between plants and microbes. Additionally, the authors discussed the mechanism underlying the assembly of microbiota community and colonization of plants. (Summary by Sunita Pathak, @psunita980) Nature Reviews Microbiol.  10.1038/s41579-020-0412-1 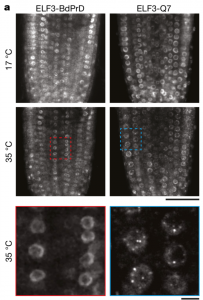 As sessile organisms, sensing the external conditions is critical for plants to complete their life cycle and temperature is one of the major factors. In Arabidopsis, the evening complex senses the temperature and it consists of EARLY FLOWERING3 (ELF3), a scaffolding protein; ELF4, helical protein; LUX ARRYTHMO (LUX), a DNA binding protein. However, the molecular mechanism behind the temperature sensing by evening complex remains elusive. In this paper, Jung et al. reported the phase transition of ELF3 from active to inactive state as a molecular mechanism for sensing the temperature. ELF3 has polyglutamine (polyQ) repeats whose length correlates weakly with the temperature sensitivity and are present within a predicted prion domain (PrD). PrD length varies between plants growing in warmer temperatures compared to the cold temperatures. ELF3-GFP protein forms a diffused signal and speckles at lower and higher temperatures respectively in planta and in heterologous expression system (yeast). This phase differentiation is reversible as the speckles disappear when cells are transferred from the higher to lower temperature and correlates with the evening complex function in sensing the temperature over a short period of time. Thus, this paper advances our understanding of ELF3 in sensing the temperature reversibly by undergoing a phase transition and has the potential implication especially, as global temperature continues to increase.(Summary by Vijaya Batthula @Vijaya_Batthula). Nature. 10.1038/s41586-020-2644-7 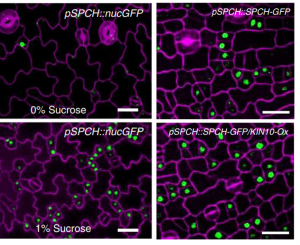 Plants communicate with the environment through stomata (i.e., pores found on leaf surfaces) and regulate gas exchange depending on internal and external cues by optimizing stomata density. Still, how plants integrate metabolic and environmental signals remain to be determined. Here, Han and colleagues discovered that stomatal index in Arabidopsis leaves decreased under conditions associated with mild energy starvation (e.g., Short Days and hypoxic liquid culture), but the application of exogenous sugar partially reversed this trend. The authors found that this process is mediated by KIN10, the catalytic α-subunit of the energy sensor Sucrose non-fermenting1 (SNF1)-related kinase 1 (SnRK1). As supporting evidence, experiments in liquid medium containing 1% sucrose showed that stomatal index was higher in KIN10 over-expressing lines and lower in kin10 mutants as compared to wild types. Sucrose treatment did not alter KIN10 transcription but activated KIN10 translation in wild-type and transgenic plants. Upon accumulation, KIN10 interacted with the master regulator SPEECHLESS (SPCH) in the nucleus of the stomatal-lineage cells, stabilized SPCH protein through phosphorylation and promoted sucrose-induced stomata formation. To conclude, KIN10 represents a key component of the positive feedback loop which allows stressed plants to recover from environmental fluctuations associated with energy starvation, such as cloudy weather or flooding. Indeed, plants resume photosynthesis in sunny days and start producing sugar. As a result, plants increase stomata density and boost carbon assimilation after the stress. (Summary by Michela Osnato @michela_osnato) Nat. Commun. 10.1038/s41467-020-18048-w 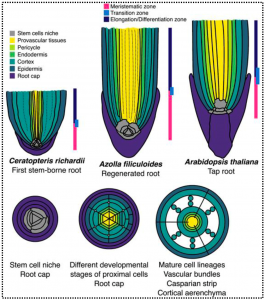 Roots are essential organs for nutrient and water uptake and have been extensively investigated in angiosperms. Many studies suggest that roots originated through convergent evolution in vascular plants, a clade that includes seed plants and ferns. Besides Arabidopsis and crops, little is known about root development in extant tracheophytes such as ferns, which represent an essential lineage to obtain a more complete picture of plant morphological diversity. Seeking to solve this, Aragón-Raygoza and colleagues monitored embryogenesis, root meristem specification and stem-borne roots (SBRs) growth in Ceratopteris richardii (the “Arabidopsis of the fern world”). The authors found that the Root Apical Cell (RAC), a tetrahedral cell thought to act as an organizing center, appears early during embryo development at 3 days after fertilization (daf), whereas the first SBR reaches maximum length at 25 daf, suggesting a determinate growth program in sporelings. Moreover, the authors found that the meristematic zone is considerably smaller in Ceratopteris in comparison to other plants, such as the fern Azolla and Arabidopsis. Histological techniques and fluorescent dyes revealed the presence of characteristic root layers (e.g., stem cell niche, cortex, root cap) and layer-specific traits, such as the Casparian strip in the endodermis. Finally, the authors characterized cell cycle activity in the root stem cell niche using EdU, a molecular marker used to detect cells entering the S-phase. They discovered that the RAC incorporates considerable amounts of EdU, suggesting frequent cell division, a result that goes against the longstanding hypothesis that the RAC rarely divides. This study introduces Ceratopteris into the modern era of plant science and lays the groundwork for future research in ferns and the genes controlling root development in this lineage. (Summary by Jesus Leon  @jesussaur) bioRxiv 10.1101/2020.08.27.271049 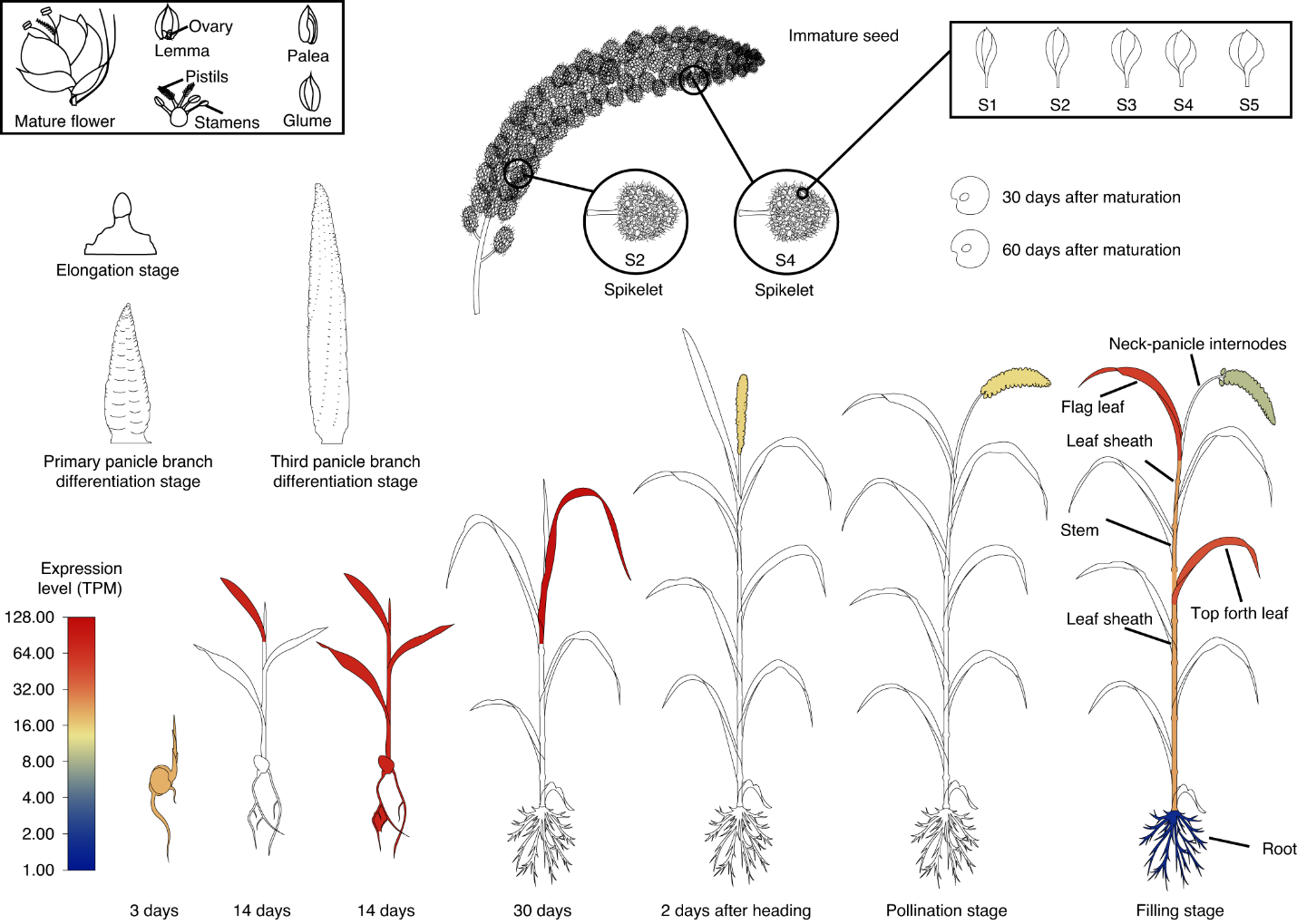 The three most widely adopted plant models all use C3 photosynthesis, but discoveries made in these plants are not always applicable to C­4 plants. Foxtail millet (Setaria italica) has been emerging as a potential C4 model species, but its use for genomics research is challenging due to long generation time and recalcitrance to genetic transformation. Through a large-scale mutagenesis screen, Yang et al. have characterized a mini rapid-cycling mutant of foxtail millet -named xiaomi – as a promising new model system for C­4 plants. xiaomi mutants harbour a point mutation in the Phytochrome C (PHYC) gene leading to a premature stop codon and impairing the essential function of this light receptor in photoperiodic flowering. The small stature and fast life cycle of xiaomi enables completion of 5-6 generations within one year and with similar space requirements to the equivalent amount of Arabidopsis. The authors assembled and annotated a high-quality reference genome for xiaomi and an online dynamic gene expression atlas. Finally, they established an efficient Agrobacterium-mediated genetic transformation system using embryonic calli. Future research with xiaomi could help investigate many characteristics of C4 plants for improvement of agricultural species. (Summary by Katy Dunning @plantmomkaty) Nature Plants 10.1038/s41477-020-0747-7 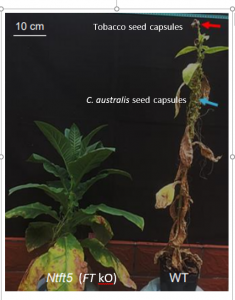 Plants sense environmental cues, such as day length, to induce flowering and successfully reproduce. An important mobile regulator of flowering is FLOWERING LOCUS T (FT). Upon floral induction, FT is transported from the leaves to the shoot apical meristem where it triggers flower development. Dodders are root- and leafless plants that parasitize autotrophic plants through the formation of vascular connections (called haustorium) that allow the interchange of nutrients, water and signals. Interestingly, some dodder species like Cuscuta australis synchronize their flowering time with that of their diverse hosts. However, little is known about the mechanism that regulates Dodders flowering. In this study, Shen G. and co-workers found that dodders do not have a functional FT and instead they obtain FT from their hosts and align their flowering time accordingly. Using soybean overexpressing FT and tobacco FT knockout lines as host plants infested with C. australis, the authors showed that FT is necessary for both host and parasite flowering. Additionally, soybean FT protein was found in C. australis extracts and protein interaction between exogenous FT and dodders FD flowering regulator was observed, indicating that FT travels into dodders steam where it interacts with FD and regulates parasite flowering. This study shows the unique adaptive mechanisms of dodder’s flowering and the physiological and ecological relevance of FT in host-dodder interaction. (Summary by Daniela Ramos @DanielaR_cruz) Proc. Natl. Acad. Sci. USA 10.1073/pnas.2009445117 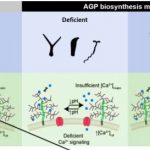 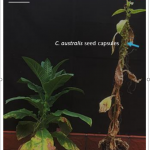