It might be a little known fact, even among plant biologists, that in embryos of many species of the Fabaceae, most oilseed plants and Arabidopsis thaliana embryos can photosynthesize within the seed (Tejos et al., 2010). We do not know why plant embryos have this capacity, since embryos are surrounded by green photosynthetic tissue and receive nutrients from the maternal plant. Whether embryonic photosynthesis matters for later seedling and plant development remains an outstanding question. Moreover, this process is challenging to study, since perturbing photosynthesis genetically in the embryo often means also perturbing photosynthesis in the adult plants. 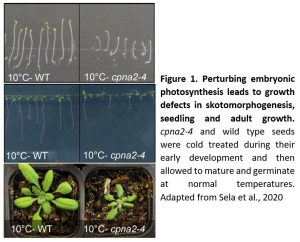 In this issue of Plant Physiology, Sela et al. found a way to tackle this question. They identified a mutant (cpna2-4) that had a pale green phenotype only when exposed to a colder temperature of 10°C. In normal temperatures the cpna2-4 mutant has a mild phenotype. Interestingly, it has smaller chloroplasts, but the reduction in chloroplast size is compensated by a higher number of them, so that the photosynthetic capacity is the same as wild type. The cpna2-4 mutation was found to be a weak allele of CPN60α2, a gene encoding for a chloroplast-specific chaperonin, null mutants of which are embryo lethal and have no functional chloroplasts. By crossing cpna2-4 with a T-DNA line of CPN60α2 Sela et al. recovered plants that had a significant reduction in functional chloroplasts only when exposed to low temperatures (10°C). The authors realized that this weak allele cpna2-4 could be used to perturb photosynthesis by a temperature switch during seed development, enabling them to tackle the outstanding question: Does embryonic photosynthesis matter for later seedling and plant development?

The short answer is that it does! Skotomorphogenesis, main root growth, cotyledon expansion and even rosette growth were impaired when embryonic photosynthesis is perturbed (Figure 1). However, Sela et al. needed to be sure that it was only embryonic photosynthesis that was perturbed. When the seeds of cpna2-4 were exposed to cold the embryonic chloroplasts were even smaller (40% of wild type), fully functional, but with less of the proteins that make up the photosystem and no longer was this deficiency fully compensated for by an increase in the number of chloroplasts. This short cold exposure resulted in embryos that were paler and had a reduced photosynthetic capacity. The authors were thus able to show that phenotypes of cold-treated cpna2-4 are really due to perturbed embryonic photosynthesis and not due to the direct effects of cold on the developing seed.

Therefore, it seems very likely that embryonic photosynthesis is important for seedling establishment and even more so for later rosette growth, but why? Why should photosynthesis on such a small scale leads to such large-scale outcomes? The authors show that the seed storage was not disturbed and that fatty acid components in the seeds were not reduced. So, the developing seedling should have had resources from the seed to draw upon during germination. Earlier studies applying a chemical photosynthesis inhibitor, DCMU,  directly on siliques, support this conclusion (Allorent et al., 2015).  Embryonic chloroplasts de-differentiate into eoplasts during seed drying and later develop back into functioning chloroplasts when exposed to water and light. It is possible that the perturbation of chloroplast function in the embryo leads to dysfunctional eoplasts and thus to defective chloroplasts in the seedling. Another intriguing but unresolved possibility is that chloroplast function is necessary for biosynthesis of hormones and other secondary metabolites, which are essential for proper growth and differentiation. These hypotheses need further study, which will now be more feasible using this cold switch described by Sela et al. 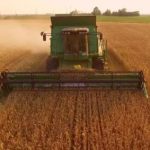 Turning a spotlight on orphan crops, the crops for the future
Scroll to top