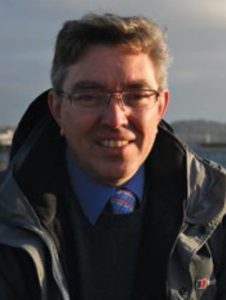 You graduated with a BA in biochemistry from Oxford University and a PhD in botany from Manchester University. Was there any special reason for the shift to plant sciences?

I think perhaps it was for the same reason that some people are vegetarians. There were many practical classes in the biochemistry course at Oxford University in the early 1980s that included the dissection of animals. I didn’t enjoy these. Because similar phenomena could be studied in plants, and the same concepts and principles applied, I decided to turn my attention to plants.

Could you tell us about your PhD dissertation and whether your post-PhD research interests followed on from your dissertation?

I have been lucky to work on the mineral nutrition of higher plants for over 30 years. My PhD described the effects of temperature on many aspects of plant physiology, from membrane composition and transport  processes to plant development and the accumulation of mineral elements, and I published seven papers from it.

My PhD was actually the second phase in a long enchantment with membrane transport processes and the mineral nutrition of plants, which began with casual jobs during the summer vacations of my undergraduate degree with Brian Loughman at the Department of Agricultural and Forest Sciences at the University of Oxford. In my postdoctoral appointments at the Universities of Edinburgh and Cambridge, I used the same biochemical techniques I had learned during my PhD studies and applied the same conceptual frameworks to analyze the data. I have had only one real job since then, and it has always focused on the mineral nutrition of plants.

If I recall correctly, and I am getting increasingly forgetful, my PhD supervisors (Mike Earnshaw of the Victoria University of Manchester and David Clarkson of the Agricultural Research Council Letcombe Laboratory) had written a short outline of my PhD project, which I was given and then left to get on with it. The facilities of Letcombe Laboratory were marvelous, the students and staff were brilliant, and I had access to all of them. David Clarkson lent me his first edition of Bioenergetics by David Nicholls (London: Academic Press, 1982), and Mike Earnshaw gave me his copy of A New Look at Mechanisms in Bioenergetics by Efraim Racker (New York: Academic Press, 1976) to guide me.

My supervisors were always there with encouragement throughout my PhD. Sometimes they scolded me, but they rarely directed me. I think, if at all possible, that that is how it should be. Incidentally, I recall a quote from Efraim Racker: “Rejoice when other scientists do not believe what you know to be true. It will give you extra time to work on it in peace. When they start claiming that they have discovered it before you, look for a new project.” I consider this to be good advice to a young scientist.

PhD in the United Kingdom is mainly by thesis, but in other places in Europe, it is by publication; what is your view on this? Do you think one has more strengths than the other?

In my opinion, they both demonstrate academic accomplishment. It is a comparison of traditional and contemporary; stylistically, it is like comparing a novel and a book of short stories. They each have their place.

You have supervised many PhD students and postdocs in your look for in a PhD or postdoc applicant or student?

I have successfully supervised more than 20 PhD students. In my PhD students, I look for true enthusiasm and an ability to read and learn quickly, never to make the same mistake twice, to take “advice,” and to be able to write. Eventually, I would like them to think for themselves, both logically and creatively. I have mentored many staff and young researchers, and I look for the same qualities in them. Surprisingly, I have not supervised many postdocs, perhaps fewer than half a dozen during my career. I would expect a postdoctoral scientist to act independently, as befits a collaborator. I prefer my laboratory to be more like a jazz club than a concert hall.

What advice would you give to your PhD students who are about to graduate, and what do you think an early career scientist needs to do to be noticed early in his or her field?

If they would like to continue in academia, I would advise them to submit proposals for fellowships on ideas they would like to pursue with influential scientists with whom they would like to work. I would encourage them  to collaborate widely and wisely, to publish research papers and reviews, to help organize topical workshops and international conferences, and to present their work at these.

Everyone is different and must choose the path for themselves, depending on their character, their gifts, their ambitions, and their purpose. Intriguingly, I once read (in the HMSO bookshop on a rainy Manchester  afternoon) that although most postgraduate students who want to become academics do not become academics, those who “fail” to become academics are, in the main, happiest.

What main research project are you currently engaged in, and what is the motivation behind it?

All my current research addresses the Food and Agriculture Organization’s definition of food security, which  “exists when all people, at all times, have physical and economic access to sufficient, safe and nutritious food to  meet their dietary needs and food preferences for an active and healthy life” (http://www.fao.org/docrep/003/w3613e/w3613e00.htm).Thus, I am developing agronomic and genetic strategies to optimize the use of water and mineral fertilizers in crop production, to reduce the entry of harmful elements into the food chain, and to improve the nutritional quality of crops through their biofortification with mineral elements essential to human and animal well-being.

You collaborate closely with a number of academics in the United Kingdom and abroad. What do you look for in a potential collaborator?

I require my collaborators to collaborate and not compete, to be honest, to keep to any agreements whether spoken or written, to give credit where credit is due, and to tolerate my idiosyncrasies.

You were a program leader in the Specialty Crop Research Initiative (SCRI). How did you balance your administrative duties with your research? And do you think it is good for research scientists to take up more administrative roles?

As a program leader at SCRI, I managed more than 40 permanent staff plus associated visitors and students. Although it took up nearly half my workweek, managing was easy: I managed a group of exceptional,  hardworking, honest, gifted, unselfish, and optimistic colleagues, who not only were excellent and innovative scientists but also published well, engaged wholly in the public understanding of science, and generated sufficient income to support their research. I believe I learned far more about science by managing the program than I would have simply by focusing on my own research. One might say that I was lucky to manage such people, at a time of relative stability, under a CEO (Peter Gregory) whom I respected. I enjoyed the job and think I gained a lot from it. Of course, I was also able to maintain my own research, which helped me through moments of suffocating bureaucracy. I would recommend the experience to even the most research-focused academic.

You have served on the editorial board of many journals and have been a reviewer for many years. What is your perspective on the rising trend of open access journals?

I agree wholeheartedly with John Raven, who wrote, “I am in favor of open access publishing, but I also enjoy being able to publish without needing a coauthor with a research grant!” (ASPB News, May–June 2013, p. 18). At first, I thought open access was a wonderful idea: it would allow everyone access to the scientific literature. But now I have my doubts. Electronic publishing seems to be plagued with unethical practices. Even e-journals from respected publishers appear to be operating using dubious practices, such as “pyramid selling,” in which someone is appointed senior editor to recruit 10 editors, to each recruit 10 more specialist editors, who are each asked to produce a special issue with 10 to 20 papers in their specialty. Then, BANG! The journal could have more than 1,000 papers to publish, and if the authors of every paper are billed $500 for their efforts, then this is half a million dollars for the journal’s coffers. I think learned societies should take an active role in  promoting ethical open access publishing, supporting the publication of works from their membership, and policing the academic literature.

In your opinion, what has been the greatest scientific breakthrough in the plant sciences in the past three decades of your career?

There have been many breakthroughs— for example,

But I have the greatest admiration for Ismail Cakmak, who identified zinc deficiency as a limiting factor in crop production and human health in Anatolia, Turkey. He demonstrated that simply adding zinc to commercial fertilizers could increase wheat yields, deliver more zinc to human diets through bread products, improve people’s heath, and increase gross   domestic product. It is said that the $1 million investment from NATO now generates over $100 million per year in increased crop yields, and I believe that the improvement in human health has produced far greater benefits. It is estimated that zinc deficiency might afflict over one-third of the world’s population, so this simple, cost-effective strategy for zinc biofortification of edible crops is now being adopted in many countries across the world.

Currently, plant science research is arguably trending toward molecular biology and many forms of omics. In your view, will the traditional plant physiologist and agronomist potentially become obsolete or redundant?

I sincerely hope that traditional plant physiologists and agronomists will never be considered obsolete or redundant. I believe that their intuition and practical skills are required to put basic research into an organismal context and to translate basic research into practical benefit. However, as Julian Schroeder stated in a previous interview in this series, “It’s a clear advantage presently for biologists to be able to work with, generate, and/or navigate ‘big data’” (ASPB News, November–December 2013, p. 20). But I ask you, would you replace general practitioners of medicine with laboratory biochemists, computational biologists, and abstract computer programs?

You have been a visiting professor and delivered seminars and workshops in many countries, including my own, Ghana. What factors do you think are currently constraining research advancements in developing countries?

That’s an interesting question and expresses an interesting opinion. I believe that many of the countries I work with, countries like China and Brazil, are making significant research advancements. My subject, the mineral nutrition of plants, is relatively mature, and for the most part, these are practical rather than conceptual advances. Food security is an integral part of the development plans for these countries, which perhaps explains why, for example, 30% of the research funding in China goes to plant science versus less than 1% in the United States. Of course, scientific advancement requires adequate infrastructures and funding, but these limit research activities everywhere. Developing countries have many challenges to overcome to achieve food security, and I concur with policies to support research to obtain practical solutions to these challenges. As my grandmother once said, “You must be able to land before you can fly.”