Symbiotic associations with microorganisms are widespread among both woody and herbaceous plant species, including most agronomic crops (Brundrett and Tedersoo, 2018). Mycorrhizal fungi provide their hosts with mineral nutrients absorbed from the soil in exchange for fixed carbon compounds produced by the plant host. Similarly, symbiotic rhizobial bacteria in the root nodules of leguminous hosts provide reduced nitrogen compounds in exchange for fixed carbon—and a nice protected environment to live in!

Rhizobial Nod factors stimulate host root hair curling, allowing root colonization and the development of the root nodules that the bacteria will inhabit. The first Nod factors characterized were lipochitooligosaccharides (LCOs) containing a sulfated tetrasaccharide of d-glucosamine (the chitin monomer) and an unsaturated C16 fatty acid. Similar LCOs produced by the arbuscular mycorrhizal (AM) fungus Rhizophagus irregularis initiate symbiosis by triggering a pathway known as the common symbiosis pathway (CSP), which is also required for rhizobial and actinorhizal symbioses (Martin et al., 2017). In the CSP, the perception of LCOs by host receptor-like kinases activates nuclear ion channels, leading to calcium spiking in the nuclei which, via a calcium/calmodulin-dependent protein kinase (CCaMK), activates transcription factors required to establish symbiosis.

Much less is known about signaling by ectomycorrhizal (ECM) fungi, which typically associate with roots of woody plant species (Garcia et al., 2015). Unlike AM fungi, ECM fungi do not penetrate the host cells, but instead form an intercellular hyphal network that surrounds host cells and allows nutrient exchanges. The molecular details of how they do this have been unclear. To address this, Cope et al. (2019) hypothesized that the ECM fungus Laccaria bicolor, which associates with roots of Populus trees, produces LCOs as signaling molecules that initiate the CSP and allow successful colonization of Populus root tissue.

First, the authors used standard root hair branching bioassays in Medicago truncatula and Vicia sativa to show that L. bicolor produces both sulfated and nonsulfated LCOs (sLCOs and nsLCOs). Mass spectrometry analysis of fungal exudates revealed a wide variety of LCOs containing chitin oligomers linked to a C16 or C18 fatty acid. To determine whether L. bicolor uses the CSP when associating with Populus, whose genome contains the necessary CSP genes, the researchers focused on LCO-induced calcium spiking in nuclei, a diagnostic feature of the CSP in both legumes and nonlegumes that depends on activation of the CASTOR and POLLUX nuclear ion channels (Charpentier et al., 2008).

To study nuclear calcium spiking, they created transgenic Populus plants expressing a nuclear Ca2+-sensitive fluorescent sensor. As a positive control, they showed that both purified LCOs and germinating spore extracts of the AM fungus Rhizophagus irregularis caused calcium spiking in nuclei of Populus roots. They then demonstrated that hyphal fragments of L. bicolor also cause calcium spiking in Populus (see figure, left side).

If Laccaria uses the CSP to generate the symbiosis with Populus, the LCO-induced calcium spiking would require functional CASTOR and POLLUX ion channels. To determine this, the authors developed a double knock-down RNA interference line in which the expression of both CASTOR and POLLUX was reduced by 80 to 90%. Calcium spiking induced by L. bicolor did require fully functional CASTOR and POLLUX (see figure, right side). Further experiments, using an RNA interference line with an 83% reduction in CCaMK expression, showed that CCaMK is also required for the full establishment of symbiosis between Populus and L. bicolor.

In summary, the authors have shown that L. bicolor produces LCOs that stimulate the CSP and generate the structures at the Populus root-fungal interface that allow the reciprocal exchange of nutrients for the mutual benefit of both symbiotic partners. Thus, the CSP has now been shown to be even more common! 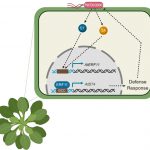 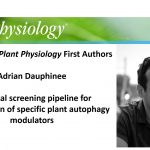