Fungal pathogens such as Botrytis cinerea can cause devastating losses to agricultural crops – ask any strawberry, grape, or tomato grower. To prevent these losses, plants can summon a variety of immune responses by recognizing specific molecules associated with pathogen attack and/or internal damage. Pathogen damage to host tissues can result in production of endogenous molecules known as damage-associated molecular patterns, which stimulate host immunity (Boutrot and Zipfel, 2017). One such molecule is phytosulfokine (PSK), a derivative of the pentapeptide Tyr-Ile-Tyr-Thr-Gln that is sulfated (–SO3H) on its two Tyr residues and is produced by endogenous processing of a longer precursor peptide.

In Arabidopsis thaliana, PSK binds to a cell surface PSK receptor (PSKR)—a leucine-rich repeat receptor-like kinase that activates an intracellular signaling pathway leading to increased cell growth (Matsubayashi et al., 2006). Here, Zhang et al. (2018) used a combination of physiological, genetic and physical analyses to show the importance of PSK signaling in tomato resistance to B. cinerea. They demonstrated that the binding of PSK to PSKR on the surface of tomato cells initiated, via cytosolic Ca2+ increases, an auxin-dependent pathway that increased resistance to B. cinerea infection.

They identified two putative tomato PSKRs that belong to the leucine-rich repeat receptor-like kinase family of proteins and show that they are found at the plasma membrane when expressed in Nicotiana benthamiana cells. Using surface plasmon resonance, they determined that PSK exhibited a stronger binding affinity for tomato PSKR1 than for PSKR2. Also, the silencing of PSKR1 impaired PSK-induced leaf immunity against B. cinerea, whereas silencing PSKR2 had no significant effects.

Because phytohormones can modulate plant immunity, the authors tested the effect of PSK on host levels of salicylic acid, jasmonic acid, ethylene, and the auxin indole-3-acetic acid (IAA). Only IAA content increased due to PSK treatment in both B. cinerea-inoculated and mock inoculated plants. Moreover, PSK did not induce immunity in dgt, an auxin-insensitive signaling mutant, suggesting involvement of auxin signaling in resistance to B. cinerea. Notably, silencing of PSK genes both decreased IAA content and increased susceptibility to B. cinerea. Silencing of PSKR1 also compromised tomato immunity, and this could be restored by application of exogenous auxin but not PSK. 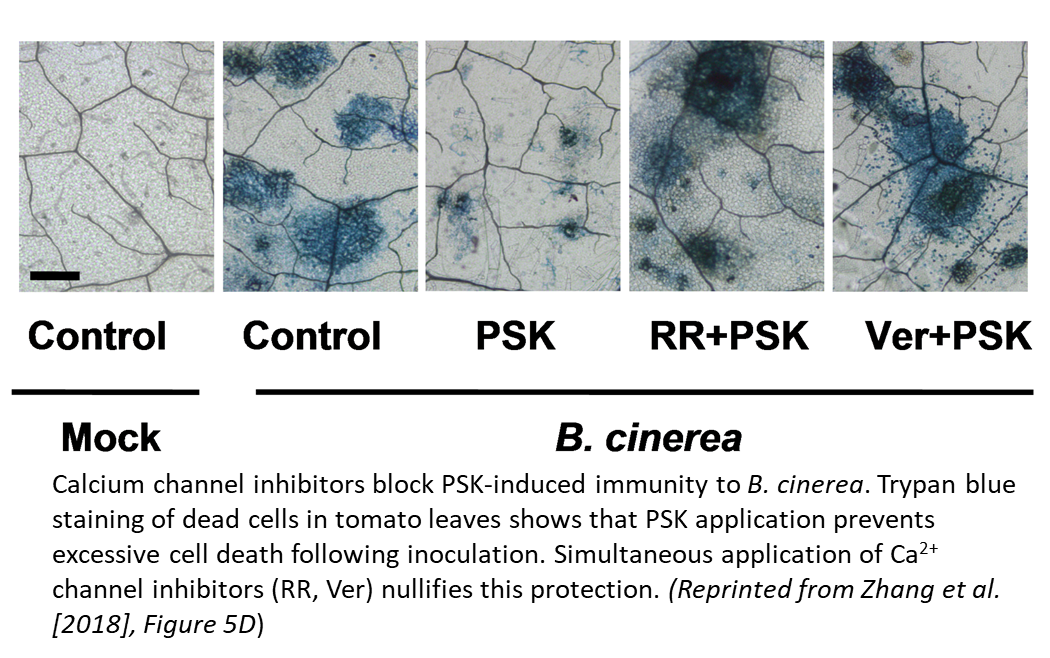 Using tomato leaf discs from plants expressing the Ca2+ reporter protein, aequorin, the authors discovered a rapid increase in cytosolic Ca2+ levels following application of PSK. This increase was prevented by Ca2+ channel inhibitors, which also inhibited PSK-induced protection of tomato leaves from cell death caused by B. cinerea (see figure). Notably, the increase in cytosolic Ca2+ was impaired in tomato plants in which PSKR1 was silenced. These results demonstrate the involvement of Ca2+ signaling in tomato immunity to B. cinerea.

Furthermore, using bimolecular fluorescence complementation and coimmunoprecipitation assays, the authors showed the involvement and interaction of tomato calmodulins with YUCCA proteins in this defense response.  They conclude by proposing a detailed model of how perception of the pentapeptide PSK by PSKRs in tomato plants initiates a defense response that requires Ca2+ influx and activation of auxin biosynthesis to provide immunity to tomato plants challenged with B. cinerea. 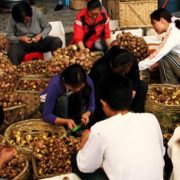 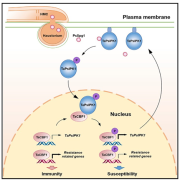 Press Release: How to target a gene