Background: Plants sense and react to their environment in a variety of ways. As an example, blue light (BL) causes the opening of stomata and increases fluid flow in the vascular system (by increasing the leaf conductance to water, Kleaf). Kleaf is regulated by a tight cell layer (bundle sheath cells, BSCs) that surrounds the entire vascular system (like a sleeve). We have recently discovered that two BL receptor proteins, phot1 a and phot2, which are an important part of the BL sensory system, are also located in the BSCs. These receptors respond even to low intensities of BL.

Question: We asked whether blue light regulates Kleaf through the phot1 and phot2 photoreceptors of the BSCs. Furthermore, what is their mechanism of action and is it similar to the one that activates the stomatal guard cells’ response to BL? 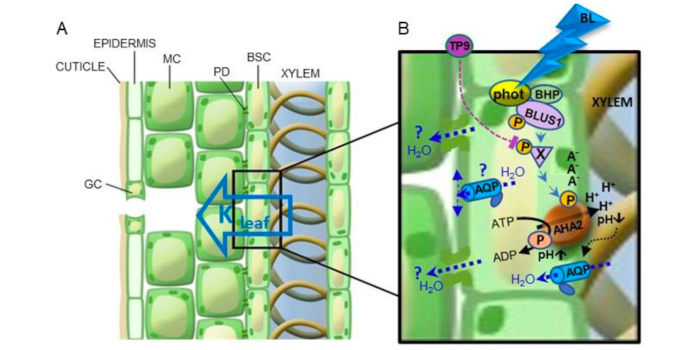 Findings: The BL photoreceptors phot1 and phot2, located in the BSCs, play an important role in regulating Kleaf in the model plant Arabidopsis’s vascular system. When BL hits these photoreceptors, it initiates a signal transduction pathway (a series of biochemical events) that activates proton pumps in the BSC membranes, which pump protons into the xylem, making the xylem sap more acidic. This acidification increases the BSCs’ permeability to water, which increases the water flow in the entire leaf.

Next steps: Since plants “trade” water for the CO2 they assimilate photosynthetically, understanding how leaves regulate their water balance in response to stress hormones, such as ABA (abscisic acid), may help us create plants that are more drought-resistant and more photosynthetically efficient. We intend to study this mechanism in other crop plants in the future and to use genetic manipulations to extend the time that plants are able to assimilate CO2 even under stressful conditions. 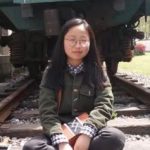 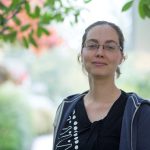