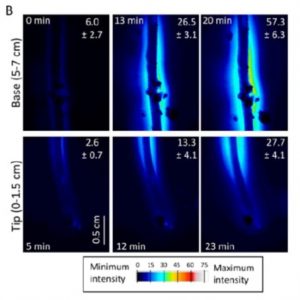 The in vivo imaging of sugars is useful for understanding how assimilated carbon, in the form of sugars, moves in plants and how this process is differentially regulated. Voothuluru et al. (10.1104/pp.18.00614) developed a gel-based enzyme-coupled colorimetric and fluorometric assay to image glucose (Glc) in vivo and used this assay to show that there is spatial variability in Glc release from plant roots. This is a big advance in our understanding of the rhizosphere because in most of the work performed to date, exudates were collected from plants grown either in hydroponic solutions or in sand flushed with nutrient solutions, and the constituent compounds, including Glc, were quantified using chromatography techniques, which obscured any spatial differences in exudation along the roots. The authors found that the primary roots of maize (Zea mays) released more Glc from the base of the root than from the root tip and that the Glc release rate is reduced in response to water stress. These findings were confirmed independently by quantifying Glc release in well-watered and water-stressed maize primary roots using high-performance anion-exchange chromatography. The authors also demonstrated differential patterns of Glc exudation in different monocot and eudicot plant species.

In a second contribution by Guendel et al. (10.1104/pp.18.00947) report on and infrared-based, microspectroscopic procedure for the quantitative mapping of sucrose in plant tissue with spatial resolution sufficient to measure sucrose in individual phloem bundles and across transport boundaries. This represents a major advance since previous technologies used for sucrose mapping were unable to quantitatively visualize its distribution within tissues. The new method described, however, allows for the quantitative visualization of sucrose at a microscopic level of resolution (~12 μm). The authors applied this method to the cereal crop barley (Hordeum vulgare) and the model plant Arabidopsis to highlight the potential of the procedure for resolving the spatial distribution of metabolites.  Analysis of stem tissue samples revealed that the phloem strands were associated with the highest sucrose content; levels were much lower in the cells associated with the xylem, and were undetectable within the xylem itself. There was a moderate concentration of sucrose, in both the chlorenchyma and sclerenchyma cells lying around the stem periphery, with a negative gradient established from the outside to the center of the stem. Notably, there was some variation in the concentration of sucrose in the vascular bundles at a given internode. Such variation has been unknown before, and could indicate some distinct functional properties of respective phloem bundles. The sensitivity of the assay ranges from 20 to 1000 mM.