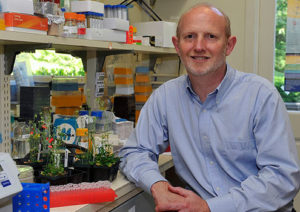 CN: Thanks for sitting for this interview. Let’s start at the beginning. How did you become interested in biology? Which scientific fields  attracted you the most?

RM: Like many molecular biologists, I was more interested in physics and chemistry as an undergraduate. However, I quickly realized that mathematics was a major component, and my mathematics wasn’t that hot. As a result, I pursued genetics, which still has an abstract, mathematical side to it that I fell in love with.

CN: Was there a specific adviser or scientist who inspired you to pursue a career in science?

RM: That’s a very difficult question. Obviously, my PhD adviser, David Baulcombe, is a very important person for me. But as an undergraduate, I read genetics at Cambridge, and Mike Ashburner was a really important inspiration for me at the time and very much since then. His appreciation for the subject is really unique, and he’s quite a character as well!  He probably led me on this path more than anyone else!

Later on, obviously, Barbara McClintock’s work was a huge inspiration to all of us. I learned about transposons first in genetics undergraduate classes and was really inspired by the whole area. It was a privilege to meet her when I first came to Cold Spring Harbor 10 years later. It was remarkable to be able to spend about three years with her before she died, and I got to  know her pretty well. She taught me a lot, not just about science but also about scientists. She was a tremendous inspiration.

CN: If you had a chance to redo your graduate student or early postgraduate years, would you do anything differently?

RM: This is so interesting. I did my PhD with David Baulcombe, who at the time was just starting his position at the Plant Breeding Institute at Cambridge. I was his   first graduate student. He was working on a number of things, and I ended up working for my PhD on a transposable element we discovered in wheat. Transposons has been a theme of my research ever since.

At the same time, he was just beginning to work on viruses. At the time, I didn’t see viruses as particularly interesting. However, he and I have both speculated about what might have happened if I actually had chosen viruses instead of transposons. The very first experiment he did of significance on viral silencing was done when I was there, but by someone else in the lab. It was a really important experiment on virus satellites having a significant effect on silencing that implicated RNA. Of course, it took almost 15 years for small RNAs to be discovered, but we’ve both ended up working on small RNAs. In his case, mostly in viruses; in my case, mostly in transposons. But it all turns out to be the same thing. It’s an interesting thought as to what would have happened. But I’m still very happy that I ended up working on transposons, and I wouldn’t change that.

CN: When you graduated, research on characterizing a single gene was being reported in prestigious journals. Now you need a way to generate more data. What do you think of the amount and quality of work PhD students produce now?

RM: Technology has really moved on, obviously. It’s been an incredible ride the past 20 years, just thinking about sequencing, for example. I sequenced one gene, maybe two, for my PhD; now it’s about how many genomes you sequenced. I think it’s important to not get too wedded to the technology. What really matters is understanding, and sometimes you can understand a huge amount of biology through just a handful of genes or a single pathway. These days, it tends to be put in a much broader context, so understanding everything around that pathway or that phenomenon is now much more important. That’s really the big change, I think.

But getting insight into mechanisms still requires the same sort of deductive reasoning and logic that it always has, McClintock being a great example. Just look at what she was able to do with such limited tools (though don’t forget she was a fantastic experimentalist—her microscopy, for example). But the genetic logic she used is still absolutely viable today, and that sort of logic can still provide extraordinary insights into biology.

So it’s not just the huge amount of data that’s important. You can’t ignore it, and it’s no secret that informatics and the ability to handle and summarize large datasets in meaningful ways has become a key skill that I think all biologists entering the field now have to learn some aspects of. I think it’s impossible to do biology without understanding at least the principles of informatics.

CN: How do you compare research in genetics during the time when you were a PhD student to now, taking into consideration all the sequencing technologies?

RM: Well, certainly technology has changed dramatically in epigenetics. We can now routinely look genome-wide at all sorts of epigenetic marks, not only DNA methylation. When I was a graduate student, DNA  methylation was pretty much the only widely accepted epigenetic mark. Now, of course, we have hundreds of histone modifications, not to mention all the noncoding RNAs and small RNAs. I think what’s interesting is that the principles behind epigenetics haven’t changed that much. We still know the importance of heritable changes that are not caused by DNA mutation.

They’re reversible, environmentally induced, and can be inherited through generations. All of that is still true. Some of the observations made by McClintock, Ed Coe, and R. A. Brink working in maize in the 1940s and 1950s are still principles we live by now. We just understand a lot more about the mechanism, and the technology has helped a lot with that.

CN: What advice would you give to educators to encourage young people to explore science and plant biology?

RM: That’s an excellent question, and a very important one. I think the appeal of science as a career is changing. We see this in applications to graduate schools in the United States. There are fewer American students who are interested in going on to a postgraduate degree.

I would say that in the early years, encouragement, confidence, excitement, and conveying the importance of science all matter. Young kids in school are very smart; they want to know what the most important things are. Emphasizing science and giving it the attention it deserves is half the battle.

Part of the problem that we’ve had in the past few years has been the emphasis on the economy. The disparity between scientists and other professions is something that should be addressed economically, and different countries have very different ways of addressing it.

Getting people excited about science from a sort of “inner sense” is the most important thing, I think. You’re not going to appeal to their pocketbooks; you’re going to appeal to their imagination and to the future. And don’t underestimate the importance of the arts and culture. The science fiction of today may be the science of tomorrow! It certainly plays a big role in promoting science.

There are lots of ways to get people excited aside from traditional lecturing. Involving kids in experiments early is a good thing. I remember being fascinated by chemistry sets when I was a child, and I think that’s still true of most kids. Getting them involved in DNA experiments early—why not? I think the DNA Learning Center has done an outstanding job of that. It’s really impressive. The kids love it!

I think plants are coming into their own. Plant biology is going to lead the way in the biology of this century.

Profile of Elliot Meyerowitz from The Scientist (2017)