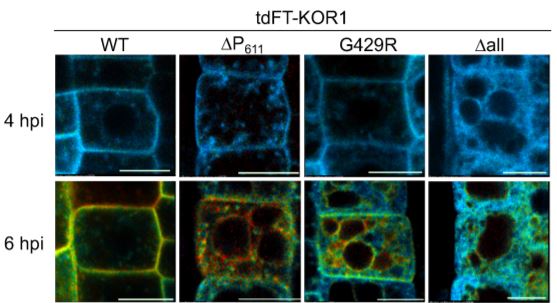 Numerous proteins coordinate the synthesis, delivery, and assembly of cell wall components during cell wall biosynthesis (McFarlane et al., 2014). KORRIGAN1 (KOR1) is a membrane-anchored endo-β1,4-glucanase glycoprotein involved in the cellulose biosynthesis of primary and secondary cell walls. KOR1 is found in multiple subcellular compartments, including the trans-Golgi network (TGN), plasma membrane (PM), and cell plate. Defects in N-glycosylation and maturation enzymes compromise KOR1 function, and alterations to the protein affect its localization. For example, when there are mutations in the catalytic extracellular domain, KOR1 accumulates at the tonoplast (TP), likely for subsequent degradation (Rips et al., 2014). Nagashima et al. (2020) investigated the multiple determinants for the subcellular localization of KOR1 and the related physiological significance in plant growth and stress tolerance.

Nagashima et al. identified a C-terminal proline-rich motif (termed the P-motif) that retains KOR1 in the TGN network/PM cycle. To explore the development of KOR1, the authors created an estradiol-inducible KOR1 reporter construct with a tandem fluorescent timer (tdFT) protein to induce de-novo synthesis and monitor newly synthesized and aged KOR1 en route to its final destination(s). Newly synthesized KOR1 proteins move along the secretory pathway from the ER to the TGN, and then to the PM. After PM delivery, aged KOR1 proteins start to accumulate at the TGN (see Figure). 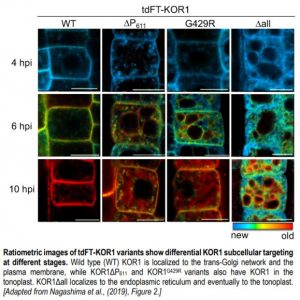 Mutations to the P-motif (via the truncated P-motif, tdFT-KOR1ΔP611) or other mutations in the KOR1 protein (tdFT-KOR1G429R, representative of the point mutation in the KOR1 mutant rsw2-1) result in variants following a similar TGN-PM-TGN accumulation as the wild type, although at different rates. However, aged tdFT-KOR1ΔP611 and tdFT-KOR1G429R was observed at the TP after accumulation at the PM (see Figure). When mutating an LL motif in the cytosolic domain known to facilitate internalization and recycling from the PM, these variants accumulated only at the PM. This suggests mutated KOR1 is retrieved from the PM before being recycled to the TGN and sorted to the TP.

Lastly, the variant tdFT-KOR1Δall, where all N-glycosylation sites were disrupted by amino acid replacement, did not produce clear signals at the PM, and stayed in the ER even at later stages. Aged tdFT-KOR1Δall was later detected at the TP, suggesting that KOR1Δall uses a unique route from the ER to the TP without passing through the PM (see Figure).

What are the functional significances of these different KOR1 subcellular locations? Mutant rsw2-1 plants, characterized by severely inhibited root growth in standard and salt-stress conditions, were complemented with different GFP-KOR1 variants. In standard conditions, KOR1ΔP transformants still had severely inhibited root growth in comparison to the wild type and wild type-KOR1 complementation line. Therefore, the C-terminal P-motif is required for full functionality of KOR1. Interestingly, whenever the LL motif was mutated (i.e. PM-localized only), root growth was partially restored to various degrees under standard conditions. However, all variants were inhibited like the rsw2-1 mutant under salt stress. This indicates that locking KOR1 to the PM is detrimental under salt stress.

Why do PM-retained KOR1 variants not support root growth under salt stress? Cellular KOR1 distribution patterns were analyzed from the onset of salt stress. PM GFP-KOR1 decreased substantially with salt stress treatment after 4 h, but recovered after 24 h. For PM-locked KOR1 (via the mutated LL motif), PM signal intensity did not change over the entire time course of salt treatment. Furthermore, salt hypersensitivity was conferred in the roots when the PM-locked GFP-KOR1 was introduced into the wild type. This indicates the need for salt-induced subcellular internalization of KOR1, and potentially subsequent activity, for establishing stress-acclimated root growth.

Nagashima et al. show regulation of subcellular dynamics of KOR1 via various modified regulatory motifs, identified by the use of tdFT analysis. This study reveals new insight into how the fine-tuning of KOR1 localization and activity may be necessary for plants to adapt to salt stress. 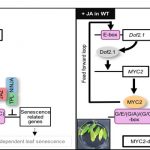 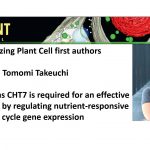