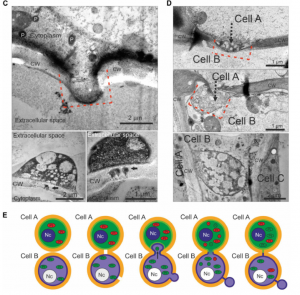 Textbooks tell us that eukaryotic cells acquired first mitochondria and later plastids through assimilation and retention of useful prokaryotes, but textbooks also imply that these were one-off occurrences that happened long ago. In the past several years, evidence has been accruing that genomes from organelles can move between cells in animal as well as plant tissues, particularly graft junctions. Here, Hertle et al. investigated how this happens, and specifically whether DNA alone moves or entire organelles move into cells of the graft partner. By applying cryo-SEM and other imaging methods to in the callus tissue that forms at the graft interface, bud-like protrusions of cytoplasm with organelle inclusions could be seen extruding through pores in cell walls. During the grafting process, plasmodesmata must reform between donor tissues, so these pores might represent a stage of that process. The small, dedifferentiated plastids present in the extruded cytoplasm are motile, described by the authors as “highly mobile amoeboid plastids” as demonstrated in the supplementary movies. As the authors conclude, “These findings unambiguously demonstrate that genomes move horizontally in graft unions via organelle travel from cell to cell.” (Summary by Mary Williams @PlantTeaching) Sci. Advances 10.1126/sciadv.abd8215

Evidence for phloem loading via the abaxial bundle sheath cells in maize leaves... 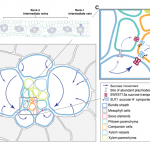 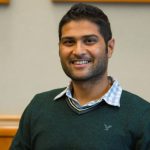